"Queens" Is a Red-Hot Showcase for Real-Life Music Royalty 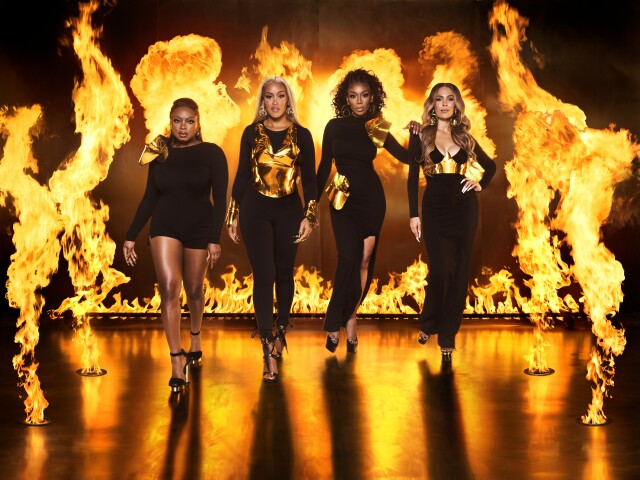 Queens … turns out it's more than just a place in New York. It's no longer just Spider-man's hometown, or a hot spot for fictional African princes to find wives, either. It's now also the name of ABC's newest drama, and let me tell you, the name fits. Created by Zahir McGhee and starring real-life music legends Eve and Brandy, alongside Nadine Velazquez and Power's Naturi Naughton,Queens follows four ex-members of the fictional yet legendary '90s hip-hop group Nasty Bitches on their collective journey towards reconciliation and self-realization twenty years after their tumultuous and public break up. (Naturi, Eve, Brandy and Nadine are pictured above, left to right.)

After a younger, more relevant artist named Lil Muffin (Pepi Sonuga) samples their hit "Nasty Girl" in a red-hot song of her very own, the now-relevant-by-association ex-supergroup is reunited for a comeback performance at the BET Awards. There's Brianna (Eve) who went by "Professor Sex" before becoming a homebody, loving wife, and mother of four. (Plus, her husband's been cheating on her in their bed for months.) There's also Naomi, a.k.a. "Xplicit Lyrics" (Brandy), who's estranged teenaged daughter is living proof that she still desperately clings to her dreams of stardom above all else -- even parenting.

Then there's Jill "Da Thrill" (Naughton, who also played rapper Lil Kim in the film Notorious), who went from having a nasty coke habit to living a clean Christian life. Also, she's secretly gay, which is fine, obviously, but she's also cheating on her husband which, you know, is definitely less than fine. We also can't forget Valeria Mendez, a.k.a. "Butter Pecan" (Velazquez), who's kind of like the group's Latina Yoko, if you will. Oh, and she's such a cutthroat that she poisoned her daytime TV personality co-worker with something that made said co-worker's lips loose enough to let all the racism out, costing them both their jobs.

Lastly, there's the aforementioned Lil Muffin, real name Lauren, whom I've dubbed "fake Saweetie" -- if you're familiar at all with that real-life rapper's colorful persona then it's pretty obvious that she's kind of what they were aiming for with this character, who's light-hearted comic relief moments have turned out to be one of my favorite elements of the show so far.

There are a lot of moving parts to this show, with its plots and subplots and flashbacks and all, but at the end of the day, for me, this thing lives or dies with the music -- and, fortunately, it delivers in that respect.

It didn't take long for me to see the similarities between Queens and what feels like the only other relevant female-driven show of its type, Peacock's Girls5Eva. Yes, these two shows are very different from one another -- one's a full-on pop comedy and the other a straight up hip-hop drama -- but, like, are they really that different? Both shows follow fictional female supergroups that peaked about twenty years ago. Both of those supergroups grew apart and mostly became estranged and aggressively average people, and both groups were also reunited by a younger, more relevant artist sampling a hit track of theirs. Both groups had shady management, a self-obsessed diva type, and a main member turned mommy, as well as a member who was in the closet during the height of their fame while also maintaining a heavy (and probably not unrelated) coke habit. I mean, it just doesn't get any more similar than all that, does it?

The real difference here, the one that matters, is one of expectation. In real-life only two of the Girls5Eva cast members are or ever were actual singers/songwriters. Combine that with the show having a tone that leans heavy into wacky territory at times, and suddenly you realize where the bar was for music quality/believability. When Sara Bareilles, the more known singer of the two mentioned earlier, spread her wings vocally it would add a professional level of validation to what otherwise felt like a comedy album, because we weren't really expecting the greatest music ever from Girls5Eva, just a great time.

Now take the Queens cast. We've got Brandy, Eve and Naturi Naughton making up three fourths of the fictional Nasty Bitches. We all know who Eve and Brandy are, and anyone who knows Naughton for playing Lil Kim is definitely expecting a certain level of authenticity from her performance, especially considering the company she's in. So, given all that, plus the serious nature of the show as compared to G5E,one can see how the expectation for undeniably dope music was there from the start. I haven't heard new music from Brandy or Eve in years, and while this isn't exactly the same as a new album, I, as a fan, will still take whatever I can from hip hop and R&B royalty like them. To their credit, what they're serving us is more than legit.

So, for the record, Brandy can spit, Brandy's character can definitely spit, and the both of them more than know it. The big dog Cam'ron (of rap group Dipset fame) has a role on the show and it's a great look for him, him being someone I also haven't recently seen in the public eye. Eve really brings it, not only lyrically, but also on the acting front as well. With a handful of kids of her own, she's definitely bringing her experiences to her performance, and it shows.

I didn't even mention the fact that mega producer and NYU professor Swiss Beats is an Executive Music Producer on this show. Seriously, like, what else is there to know?

With a positive female-centric thread and a message of sisterhood and self-identity, plus a banging soundtrack, this might be just the thing to get me through until one of these O.G.s drops a new album.

Queens is telecast Tuesdays at 10 p.m. on ABC.