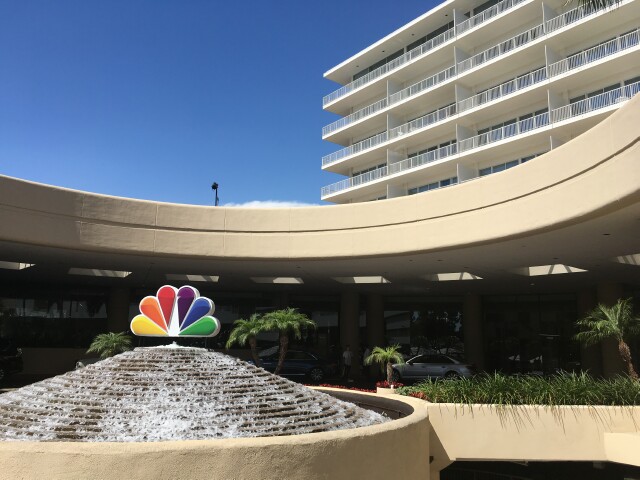 The Summer 2017 Television Critics Association tour ended late last week after 17 days of non-stop press conferences (approximately 200), informational sessions, set visits and breakfast and lunch meet and greets … plus a handful of memorable evening parties.  I have been a TCA member for over 25 years, and I have never thought of these twice-yearly tours as a competition.  The dozens of networks, studios and, of late, streaming and satellite services that present their programming and business initiatives to us are doing what they have to do, some more effectively than others, all with the goal of increasing awareness for their products. But after listening to FX Networks CEO John Landgraf on the closing day of TCA and thinking back on his press conferences at previous TCAs, which in recent years have emphasized and put into context the sheer, largely unmanageable volume of television content today and the networks’ efforts to attract press coverage for much of it, I realized that TCA tours should be looked upon as very competitive.  They are already widely regarded by the press as endurance contests, so why not see them for what they need to be on the network side in the age of Peak TV?

For example, one of the most talked about shows of the entire tour was the creepy new thriller Mr. Mercedes on AT&T’s Audience network, which presented the show and staged its official premiere with a screening and lavish parties at both the Beverly Hilton (pictured above, home to the Summer TCA tours) and the neighboring (and newly opened) Waldorf Astoria.  This was at the end of the first full day of the tour, many weeks ago. Once upon a time little attention would have been paid at a TCA to a “satellite” show, but Audience wasn’t having any of that.  The early episodes of the series are very strong and deserving of special attention.  Audience made certain the show got it.

I’m not going to point fingers at the presenters who didn’t command much attention at TCA.  As with the cable and broadcast Upfront events and the Digital Content NewFront events in New York City every year, even the smallest presentation represents a lot of work.  Bigger isn’t necessarily better, but finding a way to make an impact and stand out in the massive content mass is crucial, especially at a time when Netflix and Amazon continue to devour some of the best creative talent in the business.  Tellingly, neither streaming behemoth chose to present anything this year at the Summer TCA, though Netflix’s One Day at a Time was nicely represented, courtesy of Sony Pictures Television.  Hulu, on the other hand, remained a major player and enjoyed major attention as a result.

What follows are my accolades for jobs particularly well done at the summer tour.

Best Overall Presentation: Fox.  The super-smart marketing and publicity teams at this network take advantage of every single minute and every square foot of space throughout their day to ensure that the press is up to speed on all things Fox.  Runner up:  National Geographic.  A grand opening night screening (to promote another TCA favorite, the Iraq War drama The Long Road Home), a lavish lunch the following day tied to the seventh annual SharkFest on NatGeo WILD and several really interesting press conferences throughout the afternoon kept Nat Geo top of mind.

Best Executive Session:  NBC.  NBC Entertainment Chairman Bob Greenblatt, with assistance from NBC Entertainment President Jennifer Salke and Alternative and Reality Group President Paul Telegdy, was so full of interesting news and overall broadcast cheer that he almost singlehandedly set the stage for a stimulating and productive day.  (Too bad it ended with a thud – a minimal cocktail party featuring personalities from CNBC and a couple of stars of summer medical drama The Night Shift.  That was it.  The network’s annual all-star party was hugely missed.   So were the networks of NBCU Cable, which chose to sit TCA out this year.)  Runners up:  FX Networks (as noted above, John Landgraf always makes a huge impact) and YouTube Red (Global Head of Content Susanne Daniels was the most casual and relaxed executive on any TCA stage).

Best Panels (collectively):  AMC Networks.  IFC kicked off AMC Networks’ afternoon with a panel introducing Baroness von Sketch Show, which would become one of the most talked about comedies of the entire tour.  Then it was on to three panels for upcoming SundanceTV series that truly engaged the critics: drama The Liar (starring Joanne Froggatt of Downton Abbey); Cold Blooded: The Clutter Family Murders, a four-hour documentary that takes a new look and uncovers new material about one of the most infamous multiple murders in U.S. history, and the limited series Top of the Lake: China Girl.  The panel for the latter, featuring stars Elisabeth Moss, Nicole Kidman and Gwendoline Christie, was one of the tour’s very best.  Each panel unfailingly held the attention of the TCA and everyone left charged up rather than worn down.   Runner up (collectively):  PBS. Ken Burns was masterful as always talking about his upcoming 18-hour documentary The Vietnam War, which is destined to be one of the top television programs of the year.  PBS also brought in Tweed Roosevelt (great-grandson of Theodore Roosevelt); astronauts Capt. Scott Kelly and Jessica Meir, Ph. D; Washington Post reporter Robert Costa (who has traveled with President Trump); Ted Danson, and Henry Louis Gates, Jr. to discuss various programs.  And it topped off its two-day portion of the tour with a performance by (and panel with ) Jonathan Groff (on behalf of Live from Lincoln Center).  Some critics actually grumble that PBS takes up too much time during TCA tours.  I think they should have their heads examined.

Best Party:  Crown Media Family Networks.  As is the case at every TCA tour, Crown Media’s lavish party featuring more than 80 TV stars and personalities from movies and series on Hallmark Channel and Hallmark Movies & Mysteries was the biggest and best event of all.  This one took place on the grounds of the legendary Warner Estate and the theme was “Where Hallmark Meets Hollywood” -- a reflection of where HC and HM&M see themselves today.  Crown Media also made big news during the party, announcing the launch this fall of a third cable channel, a new SVOD service and a new publishing initiative.  Runner up:  Fox, the only broadcaster that never disappoints.  Stars, network executives and breathtaking views were plentiful at West Hollywood's Soho House, one of the industry's most popular locales.  My colleague Jackie Cutler and I enjoyed an unscheduled meal with Empire star Terrence Howard, which was only one of many highlights of the evening.

Best Streaming Presentation:  Hulu.  During the course of one afternoon Hulu presented well-attended panels for three new series and the final season of The Mindy Project.  During another afternoon it sponsored a pop-up spa offering complimentary services to TCA members and a chance to chat with Hulu publicists.  That is not the reason why the TCA honored Hulu’s stunning drama series The Handmaid’s Tale with two coveted TCA Awards at its annual gala.  Streamers please note:  The giant buzz for Handmaid’s began almost immediately after the panel for it at the Winter 2017 TCA tour.

Most Important Panel:  Lifetime's Flint.  The session for Lifetime’s upcoming movie Flint, about three women in the title town who sought justice for their families, friends and neighbors, all of whom were told their drinking water was safe even though it was (and still is) contaminated with lead, stayed with many of us long after it ended.  The horrifying real-life stories told on stage by residents of Flint had everyone in the room doubting the safety of their own drinking water; helpfully, Lifetime distributed testing kits to everyone in attendance.  Runner up:  PBS' The Vietnam War.  Because anything Ken Burns works on for years benefits us all -- in this case The Vietnam War, which is essential viewing.  Second runner up:  Animal Planet's Rescue Dog to Super Dog.  In the new reality series Rescue Dog to Super Dog, which premiered on August 12, unwanted shelter dogs are paired with people suffering from physical, mental and/or neurological disabilities in need of help from companion animals.

And finally, here are theMost Promising New Programs based on their TCA panels only.(These are not official mini-reviews.)

CBS:  Young Sheldon  (This is a surprisingly disarming charmer about the childhood of The Big Bang Theory’s lovable oddball Sheldon Cooper.)

NBC:  Will & Grace  (Yes, a new season of this very old franchise looks to be the best "new" show on NBC this fall.)

ABC:  The Mayor  (ABC began its day early on a Sunday morning with a high-energy panel for this series that was so stimulating and entertaining it put the show on everyone’s radar while also firing up approximately 250 critics and reporters for the long day to come.)

Fox:  The Gifted  (Just as television threatens to collapse under the weight of so many superhero shows, here’s one that is remarkably fresh and original.  #TeamMarvel)

The CW:  Valor  (This military drama/soap hybrid wins by default, given that the only other option is the reboot of Dynasty.)

Streaming:  Ryan Hansen Solves Crimes on Television  (An extremely clever new comedy on YouTube Red that could pop up on a few critics’ year-end lists if it remains as funny as its first episode and/or the side-splitting press conference that introduced it to TCA members.)

Basic Cable:  I’ll call it a three-way tie between IFC’s Baroness von Sketch Show; SundanceTV’s Top of the Lake: China GirlandFX’s The Assassination of Gianni Versace: American Crime Story.  (The latter will have everyone talking about the performances by Edgar Ramirez as doomed designer Versace, Ricky Martin as his partner Antonio D’Amico and Darren Criss as the tormented and twisted spree killer Andrew Cunanan.)

Program that Captivated TCA Members Like No Other:  HBO's Game of Thrones  (No matter how busy we were, we all scampered to our rooms every Sunday at 9 p.m. to watch new episodes of Thrones, arguably the only show that matters at the moment. You don't agree?  Ask around.)