"What We Do in the Shadows": Bite and Brilliance 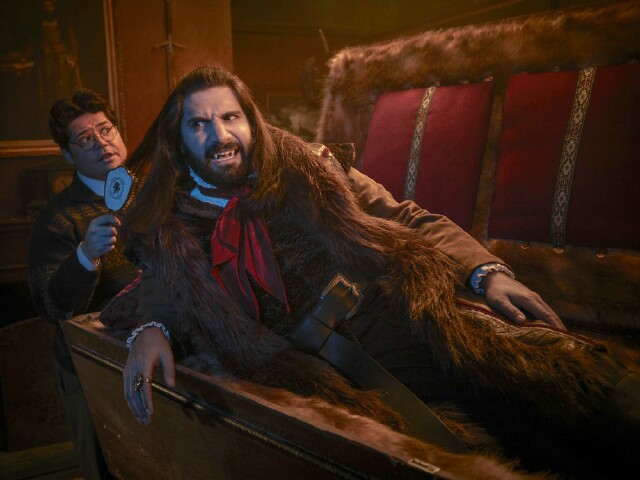 What We Do in the Shadows, FX’s television adaptation of the 2014 movie of the same name, follows three vampires who’ve been living together for over 100 years in spooky(?) Staten Island.  The source film was written and directed by two of its stars, Jermaine Clement and Taika Waititi, and now they’re at it again to help this creepy comedy reach its full potential.  Starring Kayvan Novak as Nandor, Natasia Demetriou as Nadja and Matt Berry as Lazlo -- the three vampires at the center of it all -- along with Harvey Guillén (pictured at top, left, with Novak) as Nandor’s familiar, Guillermo, and Mark Proksch as the other vamp in the house, Colin, Shadows just might be TV’s wildest-ever take on vampires, and its funniest.

Let me just start off by saying that I love everything about this show.  Waititi (director of Thor: Ragnarok) seems like he can do no wrong right now, and Clement has been a comedy god since Flight of the Concordsas far as I’m concerned.  So, obviously, I knew this was going to be good.  What I didn’t realize was just how good.  Clement and Waititi appear to have carefully identified the best aspects of the documentary style movie and have either imported them directly or tweaked them just enough to work out any kinks that time may have presented.

Shadows feels a lot different than when a new team reimagines someone else’s material.  A new team would try to “do justice” to things that they thought were important about the original work, but ultimately would want this new thing to be their take on the pre-existing thing.  In this case however, the “new team” is the old team.  Waititi and Clement are already well-versed not only in writing, directing and acting in comedy, but they know this story and all its elements inside and out, because they made the damned thing.

So, what’s different?  Well, they’ve added a lady vampire in Nadja.  She’s not just there for the sake of a different set of chromosomes on set, either.  Demetriou is hilarious, and her chemistry with Berry is almost literally to die for.  Berry, a familiar face from The IT Crowd and Community, is even funnier than I’d expected -- and its Berry, so I expected a lot.  Novak’s Nandor is the defacto leader of the group, but he’s got about as much control over the house as he does over the sun.  He and his sad-sack lackey, Guillermo (the real star of the show), have even better chemistry than Nadja and Laszlo, and that’s not to detract from them at all.  Guillermo wants to be a vampire.  That’s why familiars become familiars -- to serve a vampire until their loyalty is rewarded with eternal life (i.e. vampirism).  Unfortunately for Guillermo, Nandor constantly dashes his expectations -- and for some reason that’s amusing as hell to watch.

I feel like I should point out that none of the characters on this show are direct imports from the movie.  (They don’t even take place in the same country.)  That doesn’t really matter, though.  Fans of the original will feel the same familiar vibe.  Aesthetically, there are tons of similarities; from the decrepit castle-like house they live in to their mundane arguments about chores and tidiness, from hypnotizing and shape shifting down to the theme song and historic portraits of the tenants.  It’s all there.  The formula hasn’t changed, even though the series is definitely different from the movie.

There’s also a heightened level of ridiculousness that’s perfectly played to in Shadows, and I’d be remiss if I didn’t mention it (not that you’d miss it).  I love the “crepe paper”/”creepy paper” misunderstanding Nandor has in the first episode, and pretty much every back and forth that Nadja’s a part of is comedy gold.  Perfect example: During introductions in the first episode, Laszlo begins his vampire origin story with, “I was the most handsome man in our village,” which is immediately followed by Nadja saying, “His village was very badly affected by leprosy and plague.”  Fortunately, that same sort of tandem, “set ‘em up, knock ‘em down” kind of writing was present throughout every episode I’ve seen so far.

Some things have changed, though -- namely the addition of one Colin Robinson who, unlike his housemates, is an “energy vampire.”  Probably the most genius invention in this little universe WWDITS is building, energy vampires are essentially just boring ass people -- kind of like if they were mundanity personified.  They feed by either boring you or enraging you (usually the former), and either way, you end up feeling drained.  This is one of those perfect little slices of commentary/comedy.  I can think of so many energy vampires in my own life ... hell, for all I know I’m one of them!  (Editor’s note: No comment.)

And therein lies the point, that amazing joke (brought to life by Proksch’s side-splitting performance as Colin, by the way) sums up the key element of this or any great comedy: Relatability.  Even if I, specifically, don’t identify with any of the characters I can still relate to their situations.  Living with people who have big personalities, working hard for a boss who doesn’t seem to notice, having problems with your neighbors -- these are all things everyone has experienced and they’re all things that occur in the show, as well.

The over-the-top nature of the characters and the banalities of everyday life compliment each other in a way that I think Clement and Waititi are established pros at pulling off.  What We Do in the Shadows might be the last great iteration of vampire-based television, but I’ve got no doubt that Guillermo and the gang will be kickin’ it on Staten Island for another hundred years, more or less.