Remembering Beverly LaSalle: An Unforgettable Christmas Episode of "All in the Family" 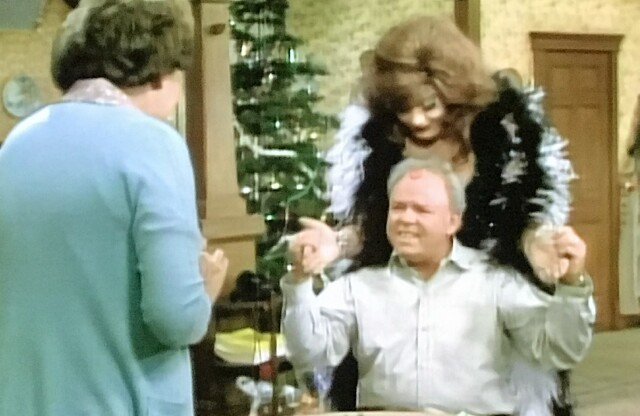 The '70s sitcom All in the Family is often dismissed today as "that show about the bigot" by Millennials and members of Gen Z who have never watched it. That's a shame, because more than any other television program in the history of the medium this controversial classic forced families across the country to think about, talk about, argue about and form opinions about a host of issues that remain central to our society today, especially racism, sexism and homophobia in their many forms.

Decades later, I can say without hesitation that I enjoy and process episodes of All in the Family very differently as an adult than I did as a kid. Indeed, those of us who watched it during its legendary first run (1971-78) remember many of its most powerful episodes, in part because they were written, acted and directed with a first-rate professionalism that remains uncommon even when compared to the finest shows on broadcast, cable and streaming today, and also because we had at the time never seen such subject matter incorporated into broadcast television comedies, which had been, in a word, "gentle" up until then. (Father Knows Best is a perfect example of that.)

The Christmas show from season eight, originally an hour-long episode, certainly supports that statement. Titled Edith's Crisis of Faith, it revolves around the character of Edith Bunker (Jean Stapleton), the loving "dingbat" wife of "the bigot," Archie Bunker. The shocking storyline is about the brutal murder of a gay man and the emotional devastation that follows, and it is no less disturbing today than it was over 40 years ago. Indeed, it's a powerful reminder of how far we have and have not come as a society since that turbulent time. 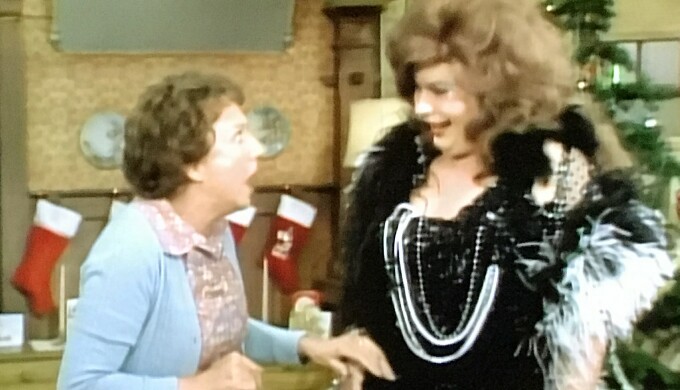 The episode opens with Edith's dear friend, a female impersonator named Beverly LaSalle, paying a visit to the Bunkers just before Christmas. Beverly (played by Lori Shannon, pictured above with Stapleton) had appeared on the show twice before. The first time, in the season six episode titled Archie the Hero, Archie is mortified when he discovers that the unconscious woman on whom he performed life-saving CPR -- that would be Beverly in full drag -- was a man. In the season seven episode Beverly Rides Again, Archie attempts revenge against a practical joker by setting the guy up on a date with Beverly without telling him who she really is.

Back then, for the top-rated series on broadcast television to have a gay female impersonator as a recurring character -- one that most of the characters on the show adored and admired, no less -- was certainly an advance. In her first two episodes, Beverly's stories were largely played for laughs (at the expense of Archie, of course). Edith's Crisis of Faith -- Beverly's final episode -- was another matter altogether. 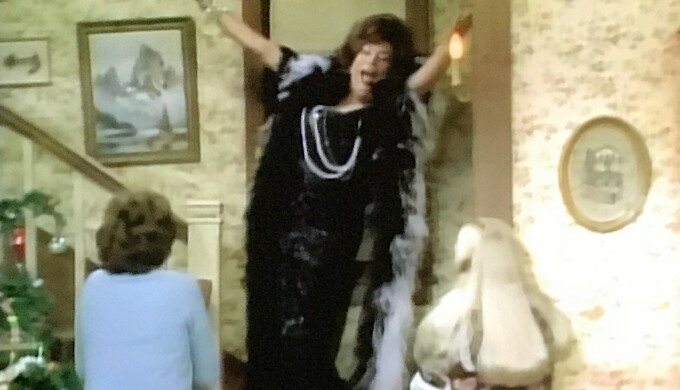 Beverly is back in New York City to make her debut at Carnegie Hall two days after Christmas. She has a lovely reunion with Edith, and with the Bunkers' daughter Gloria (underrated Sally Struthers, above right), and her surprise interaction with Archie (played, as always, to unparalleled perfection by Carroll O'Connor, pictured at top) is predictably priceless. The acceptance Beverly felt from the Bunker family and her comfort around them was so powerful (and so unusual) that home viewers couldn't help but be moved (and maybe wish they had someone like Beverly in their own circles of friends).

Edith invites Beverly to Christmas dinner, and all seems right in the world for everyone except Archie, who does his level best to convince Beverly that if he dressed in men's clothes more often, he could "turn himself around." But then everything goes dark. As Gloria's husband Mike (Rob Reiner, second from right below) walks Beverly (in men's clothes) to a street where he can catch a cab and they are brutally attacked (off camera). Mike is not seriously injured, but the assailants beat Beverly to death. 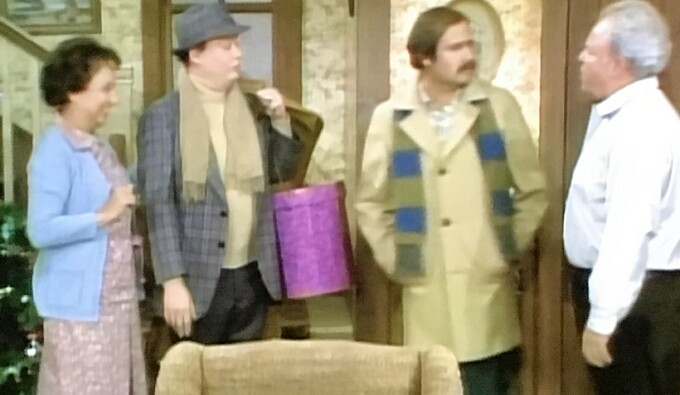 Everyone is deeply upset, including Archie, who in his typical clumsy way of trying to say the right thing admitted to liking Beverly, telling Gloria, "No matter how much she may have wanted to, she never laid a hand on me."

But it is Edith who, not surprisingly, takes Beverly's murder the hardest. She stops going to church and declares that God must not care about people, because we are all supposed to be His creatures, and yet He let Beverly be murdered because of what she was, she tearfully explains. She can't understand any of it and is at a loss as to how she can move forward. (Stapleton was always brilliant as Edith, but she truly raised the bar for sitcom acting with her performance in this episode.)

Edith eventually regains her composure after Mike helps her realize that her family and friends need her to be the person she had always been. Even so, the senseless murder of Beverly LaSalle by random homophobes on the street hung over the family and, I would argue, the millions of people who watched the show at home for some time thereafter.

These were huge, powerful themes for people to process from a broadcast television sitcom, and they were typical of All in the Family (and certain other comedies of the period from legendary executive producer Norman Lear and his colleagues). But because they were handled so well, and without the overt preaching that has compromised so much TV content in this millennium, they opened doors to discussions that hadn't been had, points of view that hadn't been shared and (we thought at the time) the beginning of diversity and inclusion on television. (Of course, that didn't kick in for quite some time.)

Due to the stifling hyper-sensitivity brought on by a toxic blend of social media and political correctness, which has creative people living in fear of being "cancelled," some of the stories and dialogue in All in the Family (and other Lear programs) likely would not be allowed on broadcast television today, and might even be shied away from on cable networks and streaming services. That is truly a shame.

Our country is a mess, in very much the same way as it was in the '60s, which surely set the stage for All in the Family to come along in 1971 and get people with different viewpoints to laugh together and listen to each other. Reboots are in demand, so where is the reimagining of this essential show that we so desperately need right now?