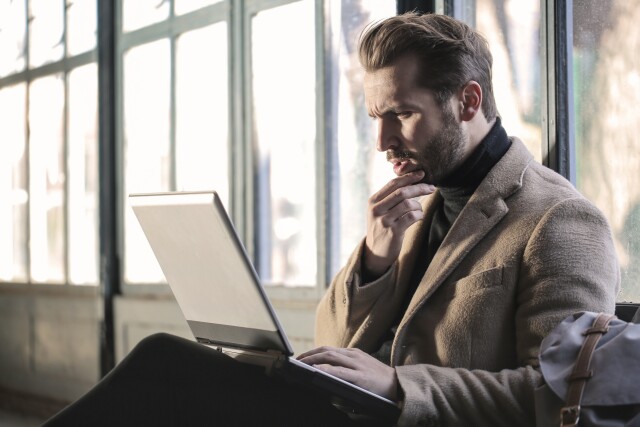 By now we all know that news viewing on television has gone up since COVID began. What few of us knew was how much it had gone up over time even before the pandemic.

The Cognition Council of the Advertising Research Foundation (ARF) held a special webinar for ARF Members only on November 9, 2020, with two panels on how context impacts advertising effectiveness. I have previously reported on the second panel. The first panel covered news as an advertising environment. In that panel, Robin Garfield, Executive Vice President of Research and Scheduling at CNN, reported that in the past 20 years cable news viewing has more than quadrupled (4.5x). In the past five years alone, it increased +50% on television and +11% on digital.

What drove viewers to increase their appetite for news to such a degree? "There is a lot going on in the world -- important issues with real consequences," Garfield explained. "Furthermore, news consumers are information seekers. They want to be educated and that makes them feel empowered. They are comforted by having essential information needed to run their lives and make decisions. Knowledge is power -- and fun. They say that they pay very close attention to the content. Additionally, because news consumers are more in touch with their values, the news environment has a magnifying effect on the advertising."

Garfield presented this fascinating picture (below) "dissecting the values of the left and right that have become invaluable in explaining consumer mindsets around today’s news journalism." 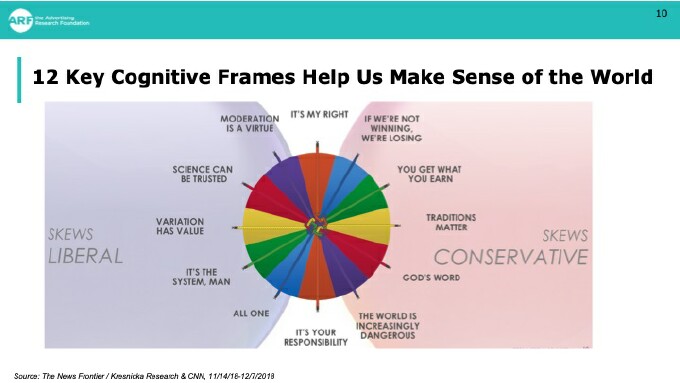 The finding about attention to the news is certainly true. Years ago, I did a 250,000-sample coincidental study for NBC and a number of agencies which asked immediate commercial recall questions. News commercial recall stood out head and shoulders above all other program types. It was a big surprise to me at the time, but I have since seen it corroborated many times.

Garfield presented further corroboration, this time in a study by MediaScience, Dr. Duane Varan’s highly respected company, which among other consilient findings reported +40% more eyes on screen time to ads in news vs. average programming. MediaScience also found that ads in hard news and political news had more Brand Recognition than in entertainment programming, and all three contexts were approximately equal in terms of Brand Liking and Brand Favorability.

This stands in strong contrast to advertiser avoidance of news environments, especially hard news and political news. When I started working with Fox and Standard Media Index (SMI) on our $2.2 trillion in sales ROAS studies I was surprised to see how news accounted for only about 0.1%-3.0% of all adspend by the major CPG, automotive and QSR brands. The same studies showed that news ROAS was much higher than the TV average in these three verticals. This is a case of what industry legend Joel Tucciarone called "Frozen Perceptions." Beliefs that defy all data. The Bill Harvey Consulting (BHC) ROI optimizer showed that the optimal allocation to news would have been double digit in all three verticals.

The research done by Alex Gittleson, Senior Director, News Insights and Positioning at NBCU, echoed the CNN findings completely: "From our qualitative (Red Lantern) research, over and over again in our conversations with regular viewers of 'polarizing' news programming, viewers unanimously expressed the same feelings: They have no issues or concerns with advertising on these programs. And just as important, many of these interviewees described the content as 'their show' and find the content itself anything but controversial or polarizing. From our quantitative (MediaScience) research, there was no evidence at all that 'hard news' creates a negative transfer effect on the brands that advertise within or adjacent to this type or programming -- results that were validated and reinforced by biometric feedback. An interesting result from MediaScience related to purchase intent. Viewers of 'hard news' had statistically significant higher purchase intent vs. other programming genres tested. These findings have been repeated by ongoing studies we are conducting around political viewers."

Michael Follett, founder of Lumen, in a study conducted in both the U.S. and U.K. in August 2020, using eye tracking, ad recall and an innovative measure of advertising impact on price elasticity, found that in all three measures, ads served in hard vs. soft news were equally effective, and that ads served to viewers who lean politically in the same direction as the context are more effective.

The ARF in its Event Summary said: "Congruence between the audience's values and the values conveyed by ads magnifies audience connections with brands that advertise in news programs."

Some advertisers sensing the anger generated by the left-right divisions being amplified by today's politics have leaned away from advertising in the news. Others have adopted what might be a more pragmatic strategy, to be present in the spectrum of all news -- left, right and impartial.

Ignoring advertising effectiveness for a moment, let's also acknowledge that there may be other reasons why an advertiser might choose to advertise in news. For example, to support journalists and writers in general. Most of us know that the internet has caused a huge drop in the ability of news sources to maintain subscription revenues which classically have always been half of the support of journalism.

By deconstructing left and right leanings into more universal values, which themselves are not negative or divisive, Garfield's schematic provides some ideas for customizing psychological contents of ads placed in specific news environments. My own DriverTagTM system provides other universal values that can also be used in advertising to resonate with viewers and contexts without turning off any viewers. As the ARF has concluded, "Strengthening the connection between your advertising and the contexts in which it is placed can result in greater advertising receptivity and more effective advertising." And the ARF has expanded the meaning of "context" beyond the content adjacent to an ad, to also include the role of consumer sentiment, values and cultural trends. RMT DriverTagsTM already include consumer sentiment (moods, emotions, feelings), human values, character and personality traits, human situations and content descriptors.

These consistent findings across two continents and several research companies all agree that news is an under-used context for advertising. We recommend that brands test these environments and read their own results. Attention and ad recall as well as other biometric and verbal-response-based metrics are important and necessary conditions for advertising effectiveness, but not sufficient for marketers focused on ROI and long-term branding effects, and testing should therefore be focused on the latter more definitive metrics.

We have all lately proclaimed ourselves to be data-driven rather than driven by old shibboleths, but the SMI factual ad-spend records show that old prejudices are still standing in the way of greater marketing effectiveness. Let’s walk the walk.

I would be untrue to myself to not add my personal fervent wish that the news, while giving their viewers what they want, in these troubled times advocate for greater cooperative spirit with others who have differing views, in reaching the kinds of compromises and creative solutions inherently called for by the ideal value we call democracy.