Robby Benson Returns to Acting in Hallmark's "A Feeling of Home" 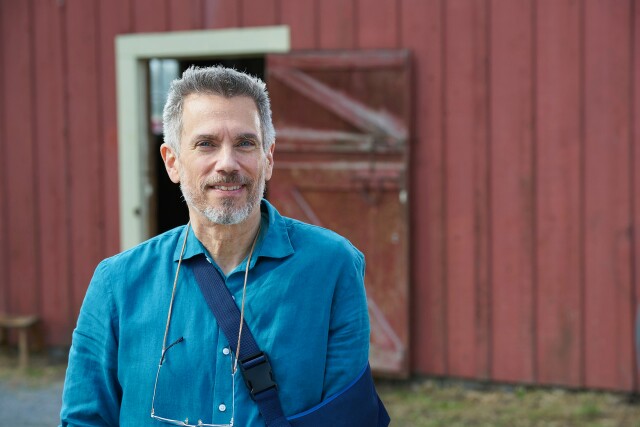 For a period in the ‘70s it was impossible to open the pages of teen magazines without the image of actor Robby Benson looking back at you.  Movies like Ice Castle’s and Ode to Billy Joe only cemented his all-American heartthrob status. Despite continued on-screen success through the ‘80s and ‘90s, though, by the year 2000 the actor had all but disappeared from screens, transitioning to behind the scenes as a noted director (Friends, Jesse, Dream On) and as a voice artist (providing the voice of Beast in the Disney classic Beauty & the Beast).  This weekend Benson (pictured above) moves back in front of the camera, making his Hallmark Channel debut in A Feeling of Home.

It takes something pretty special to get him in front of a camera these days, and A Feeling of Home was just that.  “I'd been reading a lot of scripts and passing on things because this is a time in my life when I’m truly enjoying being a husband, father, grandfather,” he explained during an exclusive interview with MediaVillage.  “When I got this script, the odds were that I would read it and say, ‘Thanks, but no thanks.’  But the truth is, the script is so skillfully elegant, it really is a lovely, smart piece of work.  When I read it, I really wanted to be a part of it -- and I was.”

In the film, Benson stars as cattle rancher Wes Cooper, whose daughter Abby (Jonna Walsh) is the host of a popular web series titled New England, My Way.  When Abby prepares to launch a line of home products, her plans to head to New England to shoot some authentic scenes are derailed when Wes injures himself in a fall.  Arriving at her father’s ranch in Langston, Texas, Abby encounters Ryan (Nathan Dean Parsons), her ex-boyfriend, currently employed as her father’s ranch hand.  (Walsh, left, and Parsons, center are pictured below with Benson.)  As the couple gets reacquainted, it’s evident their mutual attraction is very much alive and well.  However, when the powers that be at Abby’s show discover her roots are in Texas rather than New England, she’s forced to make a decision -- head east to maintain her burgeoning empire or stay in cattle country and follow her heart. 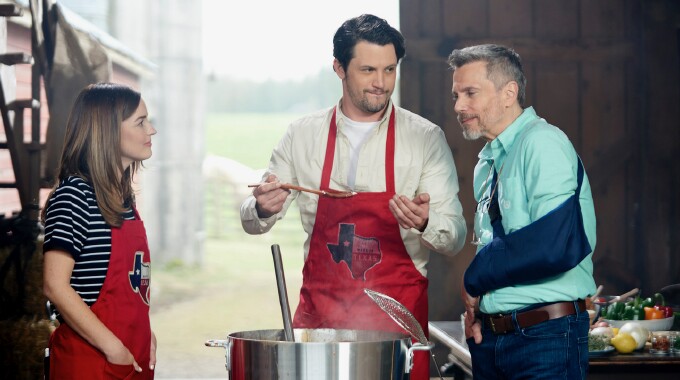 For Benson, the appeal of the film lay in the intricacies of the father/daughter relationship.  “My life has always been about being the best husband and father I can be, [but] the character I play has a bit of a problem communicating with his daughter,” he revealed.  “He has an old habit of behaving in a certain way that he doesn't even realize and no matter how much he adores his daughter, it's just not coming through in anything they do together.  He does think she hung the moon and that part of the story started me thinking, ‘This is actually really lovely.’”

Although, of late, the bulk of Benson’s work has been as a director, switching his directorial hat to act in A Feeling of Home was a joy.  “[Switching caps] is actually a lot of fun for me,” he shared.  “I have to turn off the director side of my brain and understand what my role is in the big picture.  I like doing that and the idea of learning something new.  I'm 63 and have been working for over five decades, and the reason I love this business is that you can never learn enough.”

According to Benson, his progression to director was a natural one.  Beginning his career on Broadway, he found success at age 15 co-writing an award-winning film that he wasn't credited for.  He followed that writing One on One and made his writer/directorial debut with Modern Love, calling in a favor from friend Burt Reynolds to star.  Reynolds then invited him to direct episodes of his series Evening Shade and the rest was history.  “He really liked my directing style,” Benson recalled.  “Suddenly I could shoot single camera, multi-camera, half-hour comedies, and hour dramas.  I loved doing them and the more I did people would ask, ‘Do this for us.’”

Benson has fond memories of his teen-heartthrob days.  “That was a wonderful time,” he said.  “A lot of people who've been in that position, back in the day, had a problem with it.  I never did, as I've always liked people.  When [someone] would ask for an autograph, I'd get into a conversation and learn so much from them.  I've had four open-heart surgeries and people would ask me about that, or problems they or relatives had.  After the autograph, there was a chance I could help someone.  I'm really at peace with my past and do feel very lucky!  I've been married for 37 years and love my wife (singer Karla DeVito) more today than the day I met her -- if that's even possible.  There’s a lot of love and laughter in our environment and it's pretty wonderful.”

With the doors to Hallmark now opened, and given the delightful experience he had, Benson is eager to return to the fold.  “I'd love to direct something for them,” he shared in closing.  “I really am a fan of what Hallmark does.  They make wonderful pieces of entertainment.  I also adored my co-stars and the crew.  It really was a lovefest and a wonderful experience.  It was a complete blast to the 10th power!”

A Feeling of Homewill be telecast Saturday, May 11 at 9 p.m. on Hallmark Channel as part of its annual Countdown to Summer programming event.