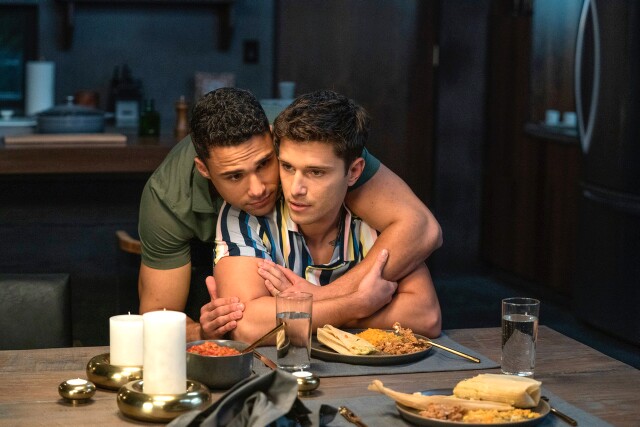 Fox’ hit series 9-1-1 expanded its borders this year with the spin-off 9-1-1: Lone Star, which introduced us to a fresh batch of first responders, located this time in Austin, TX.  It’s the first new broadcast series of 2020 to emerge as a hit.  (Read Ainsley Andrade's review of it here.)  Like Fox's Los Angeles-based mothership, the private lives of its inhabitants are just as complex as the emergencies they handle.  However, none are more complex than those of gay characters T.K. Strand (Ronen Rubinstein, pictured above and below, left) and Carlos Reyes (Rafael Silva, right).  As the son of fire chief Owen Strand (series star Rob Lowe), firefighter T.K.’s many trials and tribulations were documented from the onset; struggles with addiction, a suicide attempt after being dumped by his boyfriend, a move to Austin and the challenge of being accepted for who he is in a tough new city.  Patrol officer Carlos, meanwhile, has trouble handling his attraction to T.K., who isn’t interested in another commitment.

For both Rubinstein and Silva, landing roles on the series and getting to explore such layered characters was career-altering.  “This is a first for me,” Silva said when MediaVillage recently spoke with him.  “It’s my first [series] booking, so it’s pretty exciting and pretty humbling.  It’s also amazing to be able to act opposite somebody [like Ronen] who’s been doing this for a little while but treats it like the first time every time.”

“This whole thing is a dream come true,” added Rubinstein.  “Getting to work with legends like Rob Lowe and Liv Tyler (as Capt. Michelle Blake), every time you show up on set you get to learn from [people] who’ve been doing this for years.  That’s something you can’t teach or read about or watch on YouTube.  It’s the greatest lesson as an actor and makes you bring your A-game every time.  And when (Silva) says this is his first job, you wouldn’t know it.  We’re so blessed with the cast we have, from the veterans to those on the rise, it’s been an unbelievable experience.” 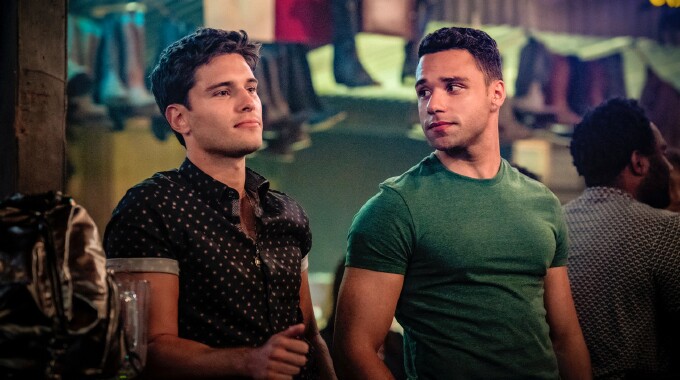 While exploring their characters’ mutual attraction, the two actors have also shared some intimate on-screen moments, and while their “relationship” still has a question mark hovering over it, Silva is thankful to have a supportive scene partner.  “The beautiful thing about this entire cast is it doesn’t matter if we get it right the first time, (because) we’ll find the meaning of the scene,” he shared.  “That’s the only thing you can really hope for as an actor -- working with someone that will pick you up every single take.  I feel that with Ronen every time we’re on set.

“The first time we all met, was at the rehearsal for the line dance (in the pilot),” he continued.  “That was the first time the entire cast got to feel each other’s energy and character traits.  [The dance] was actually a relaxing experience because we all knew what we were doing and we all really wanted to do it.  We basically played off each other, and like a rookie, you walk in and try and focus on the work while taking it super seriously, even though it’s a line dance.  I mean, we took it seriously, but without the seriousness.” 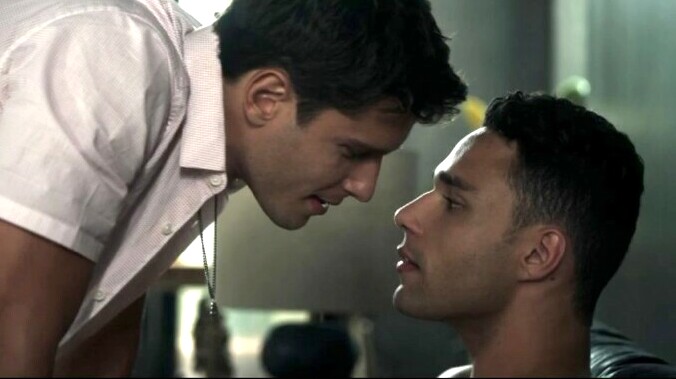 Chatting with both actors, I couldn’t resist asking who decides what show gets which emergency?  As continuously innovating as the weekly crises are, there must be only so many to go around.  “They stay true to the environment, one series being set in Los Angeles, the other in Austin,” Rubinstein replied.  “It’s not like there’s going to be a tornado in California or tsunami in Texas.  The best thing about the show for me is that we are authentic and true to the real men and women that do it every single day.”

“That’s something we can’t mess around with, as they are the people we are representing,” echoed Silva.  “If we did, we’d lose the entire show.  These people are real superheroes!  If you call 9-1-1 you don’t get Capt. America; it’s a firefighter, a cop or a medic, so we have to stay true to that.”

“But we also get to give them our own flavor and twist, [plus all] the new characters,” added Rubinstein.  “The way Lone Starwas shot enabled us to give it our flavor and have a unique look.  It’s amazing that we get to experience the 9-1-1 world together, but they are two very distinct shows and that’s what Ryan Murphy wanted to make.”

As the first ten episodes of 9-1-1: Lone Star wind down, paving the way for new installments of the 9-1-1 mother ship on March 16, both actors are thrilled that the fans of the original series hopped aboard for the initial Texas ride.  “9-1-1 is the No. 1 show on television,” beamed Silva in closing.  “So, for us to have its fans embrace us, or to even acknowledge us in the first place, is amazing.”