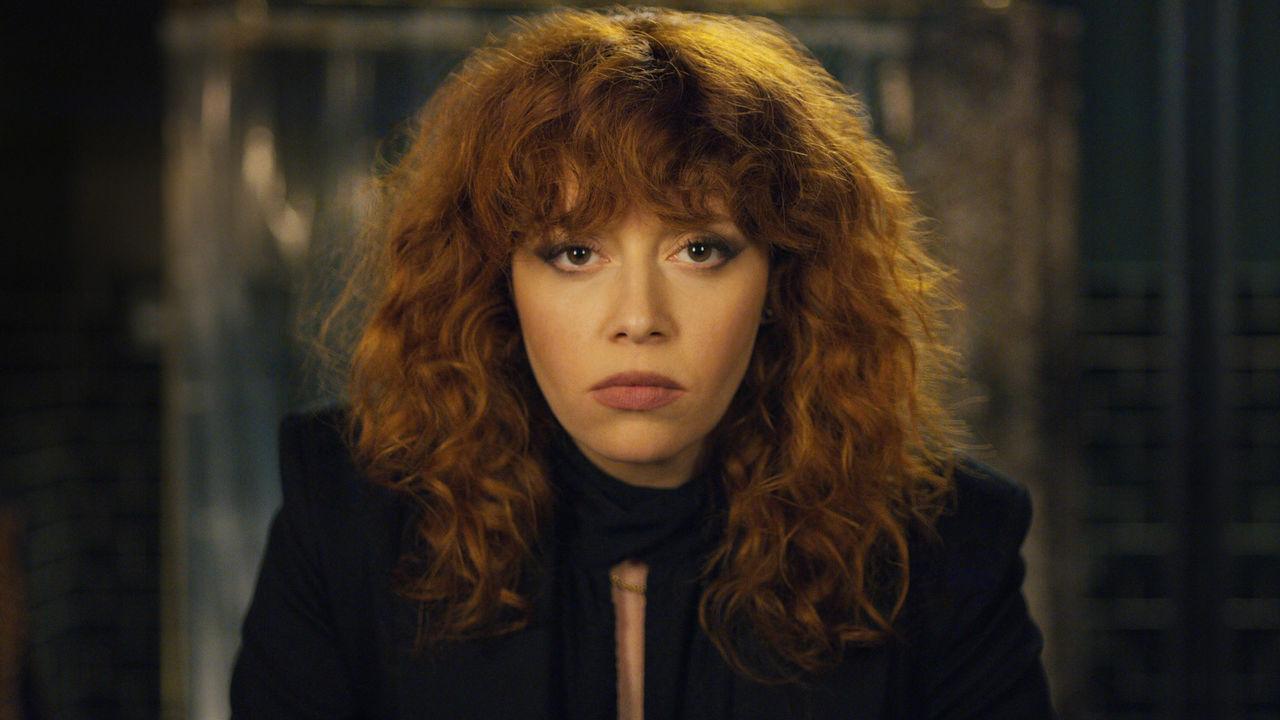 Russian Doll, created by Leslye Headland, Natasha Leone and Amy Poehler, might be the best damn thing I’ve seen on Netflix in a long time.  I don’t often use the word “perfection,” because nothing ever really is, but I dare you to find something wrong with a show this well put together.

The series opens on Nadia Vulvokov (Leone), a New Yorker who just so happens to be celebrating her 36th birthday.  Little does she know that this might be her last party ever, because every time she leaves it she dies, and instantly returns to the bathroom at the party, in the exact moment we found her in when the show began.  This Groundhog Day-like scenario, while confusing for Nadia, is hilarious at first, but it quickly turns into something of a nightmare for her as it continues to happen over and over (and over).

This show hit all the right notes for me from the very beginning.  Natasha Leone’s Nadia (pictured at top) has that classic ‘70s New Yorker attitude that in the past was usually reserved for male leads.  “Your antiquated gender roles have no place here,” is the message this show puts out, and that’s made clear from the jump.  Nadia is cynical, funny and unapologetically caustic and, as a New Yorker myself, I found her super-endearing.

Nadia’s friends Maxine (Greta Lee) and Lizzy (Rebecca Henderson) seem like the coolest, most interesting two people anyone could ever find themselves lucky enough to count as friends. Almost every single interaction they have with Nadia is not only funny as hell, but also a perfect example of how to further the viewers’ understanding of who these people are by “showing and not telling.”  There isn’t a bunch of exposition in real life, so Russian Doll is damn near exposition free.

The supporting actors really do their jobs in this show, but it’s the writers who crafted these intriguing and unique characters that really made it all possible.  Every person who Nadia interacts with -- from Farran (Ritesh Rajan), her friend at the deli; to Horse (Brendan Sexton III) the homeless guy that hangs out in the nearby park, to her surrogate mother Ruth (Elizabeth Ashley) -- is special, just the way you and I are.  They are all their own people, with their own distinct personalities and styles, and yet they all fit together to create this version of New York that feels so real and surreal at the same time.  It’s a task that many a show have attempted, but that Doll manages almost effortlessly.

The show itself can at first sound reminiscent of many things.  (Indeed, I called it “Groundhog Day-like” at the beginning of this very article.)  But make no mistake, it is its own beast.  The show does have a “choose your own adventure” kind of feel to it (stated by Leone herself during an interview on AOL Build) but the difference is, unlike the Black MirrorepisodeBandersnatch, we don’t get to choose Nadia’s adventure.  This is further demonstrated by how closely the narrative follows our redheaded leading lady.  For the most part the story stays with her, and with our hands tied by the guidelines of conventional storytelling, we find ourselves at the mercy of her decisions.

So, when the mood takes a turn, all this dying sh*t stops being fun.  We feel it, not in an unentertaining way however, but just the opposite.  We’re involved, maybe because we identify with her, maybe because she’s likably unlikable, or maybe just because we’re just curious about how this all plays out.  No matter the reason, though, we are all along for the ride, and the isolation of being the only person who remembers every loop of the night gets transferred onto us, because we can at least recognize her pain and are also helpless to do anything about it.

In this vein lies the main difference between Nadia and Stefan, the nasty lead character of Bandersnatch:  Stefan’s problems did not feel like our own.  When something bad happened to Stefan (or anyone else) it was like watching an experiment through a window, but when something happens to Nadia, I felt for her, with genuine concern for her well-being, fictional as she may be.

It’s hard for me to get into the true mechanics of what makes this show great without giving away the farm.  (I’d hate to ruin the journey for someone else.)  But Ican say that, besides being quotable, GIF-able, meme-able, and everything in-between, its also as honest a show as they come.  It weaves together themes of friendship, self-value, mental health, depression and love, then combines them with a depiction of New York City that is symbolic of the way life feels; chaotic, complicated, dangerous, unpredictable, amazing and beautiful all at once. Whatever was going on in Nadia’s life before that moment in the bathroom at the party doesn’t matter, which feels like why we always (re)start there, because what she does going forward is what really counts.

After initially finishing the first (and currently only) season of this show, I was on such a Russian Doll-high that I tweeted, “It is ‘cancel-my-Netflix-if-there-isn’t-a-season-two’ good.”  Now, while I still definitely stand by that sentiment, I’d like to amend it.  Yes, Russian Doll is more than deserving of a second season, but honestly, the story that was told over this first season was told so well, that it almost feels too complete continue.  With eight episodes at no longer than 30 minutes a pop, they clock in at no more than four hours total.  (If this had been a four-hour movie, it would have been the best damn four-hour movie I’d ever seen, not that I've seen all that many).  No sequel is needed; in fact, the idea of continuing something that made its point so well may seem blasphemous.  But the cast and crew are well-deserving of the additional work, and they’d probably be the only people capable of following up this particular masterpiece with a worthy successor.

Regardless, I want more!  Much more!  Long live Russian Doll.