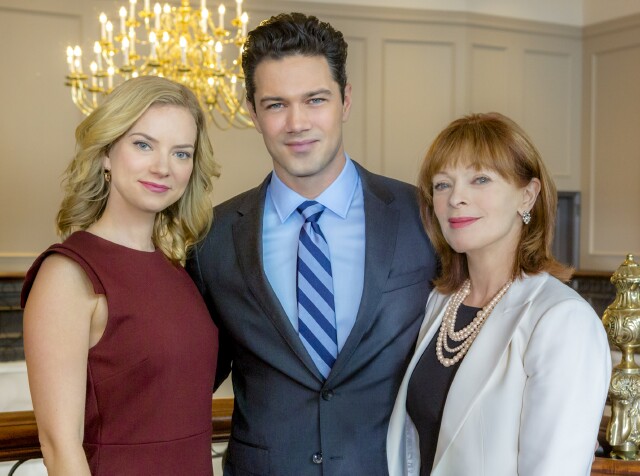 Ryan Paevey knew 2018 would be a year of change.  The dashing actor would be exiting his long-running role as Officer Nathan West on ABC’s General Hospital and while he was unsure of what was ahead, he knew there was one constant in his life -- Hallmark Channel.  It was an association that began in 2016 with the movie Unleashing Mr. Darcy and continued in 2017 with Harvest Love.  Now Paevey is delighted to be back as Donovan Darcy in the sequel Marrying Mr. Darcy, which premieres Saturday night.  “It’s my second time filling Mr. Darcy's shoes and it feels great because he has some pretty lovely [footwear],” Paevey (pictured above at center) said with a laugh during an exclusive interview with MediaVillage.  “Unleashing Mr. Darcy was left open to the possibility of a sequel, and obviously we were all very hopeful.”  Happily, “the fan response was so overwhelming and almost constant for the last two years," he continued.  "People were very vocal [about wanting] for another.  I really think that's what made it happen.

“The fandom in the Hallmark universe is just as lovely as the Hallmark universe itself,” Paevey said.  “It's good to have a place to go where you can get that, and it gives me a sense of personal gratification to make someone who watches a Hallmark movie smile.  I'm a firm believer that there’s a place for every face and space.  If you want to see an action movie, that exists.  If you want heavy drama and mourning, that exists.  There needs to be something on the other end of the spectrum.  Hallmark is a happy place.  It's a good thing to have a place where positivity is a constant.  I'm really honored to be a part of that.” 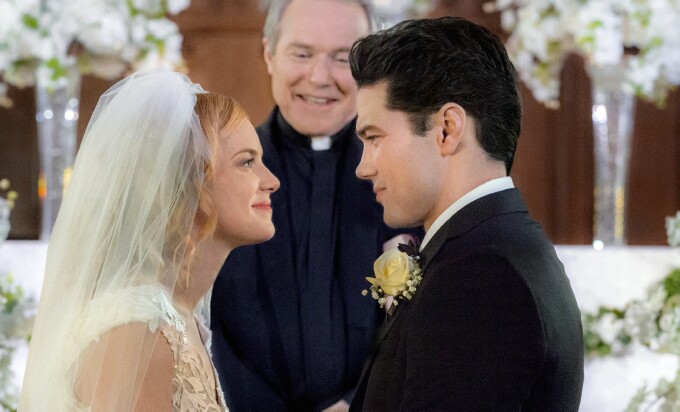 Marrying Mr. Darcy reunites Paevey with his Unleashing co-star Cindy Busby and picks up six months after philanthropist/businessman Darcy and schoolteacher Elizabeth Scott (Busby, pictured at top left and above) encountered one another at a dog show.  Their rocky start has long mellowed and the couple is now blissfully in love.  But many new challenges arise when Elizabeth accepts Darcy’s marriage proposal, including the job of organizing a wedding and the daunting task of trying to keep at bay Darcy’s meddlesome Aunt Violet (Frances Fisher, pictured top right).  With differing views on everything from the scale of the event to the dress and the centerpieces, Darcy finds himself playing peacemaker and desperately trying to bring two very different families together.

For Paevey, playing Mr. Darcy is reassuring and comfortable.  “While he is a businessman, I'd like to think he has an edgy side,” he said of the character.  “I see him as someone modeled on the gentlemen of old, guys who are talented motorists and sportsmen, academics who speak languages -- a little jack of all trades, maybe?  There's a lot of stuff like that in me in that I'm a good traveler [and] I do a lot of adventure stuff.  So I have a lot that I keep trying to nudge Darcy's way.”

While its doubtful Mr. Darcy will be making any major career moves, Paevey’s story is different.  The decision to leave General Hospital was indeed risky, but the actor knew it was time.  “I knew about the General Hospital departure in 2015,” he revealed.  “The plan was always that I would be there for a time, then move on to other things.  I learned so much.  I made many connections and friends I still talk to and hang out with.  It was a great part of my life.”  However, the decision to kill off his character was not his.  “I was completely blown away by it and honored by the sendoff that Nathan got,” he said.  “Nathan had a monumental, historical soap [departure].  The death arc went for about a month.  I was honestly astounded by the amount of established canvas used to mobilize that storyline.  And I am open to the idea that Nathan's ghost may periodically come back.”

In the meantime, Paevey is content living life to it’s fullest.  He’s hoping for a third Mr. Darcy movie and is happy working on Fortunate Wanderer, the exquisite jewelry line he handcrafts.  He considers himself a student of life.  “The moment I began this acting journey it kind of felt like whitewater river rafting,” he said.  “You push away from shore and realize you're part of a weird system that's been in place for a long time without you.  I'm now part of it and it has control.  I knew GH was coming to an end.  I knew I'd be more involved with Hallmark in 2018.  I'm excited about the other projects I have going.  I do my jewelry thing.  I still travel and life is good.  I love learning; it’s not like you are going to run out of space.  I’d love to segue into producing or directing.  Spiral up!  Everything's about spiraling up and expanding your universe.”