Ryan Seacrest and the Worst "Knock Knock" Joke Ever 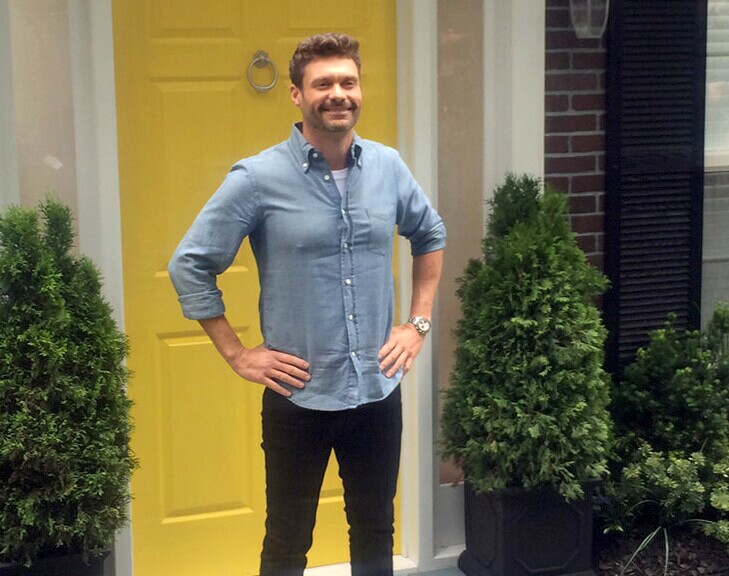 It’s been three days and I still can’t shake the experience of sitting through the premiere of Fox’s live hour of giveaway thrills, “Knock Knock Live,” likely because certain segments in it comprised some of the most degrading television I have watched in quite a long time -- probably since something like the one-shot special “Who Wants to Marry a Millionaire?” (2000) or the short-lived series “Playing It Straight” (2004), both on Fox.

Admittedly, it isn’t fair to create the impression that Fox has a lock on tawdry or exploitative reality fare. Every broadcast and almost every basic cable network has presented its share of atrocities during the last 15 years, after two classy successes, ABC’s “Who Wants to Be a Millionaire” and CBS' “Survivor,” started the most recent (and evidently permanent) unscripted television craze.

But “Knock Knock” is just asking to be – pardon me for this – knocked, upside the head if not onto the ground. Plus, it features as its host the reliably energetic Ryan Seacrest (pictured above), a man who at this point in his career needs to learn how to say “no.” The guy has done so much -- including host the most successful reality program in modern television history, “American Idol” – that his presence on any new show demands attention. It also raises expectations, which only proved detrimental to the “Knock Knock” experience. 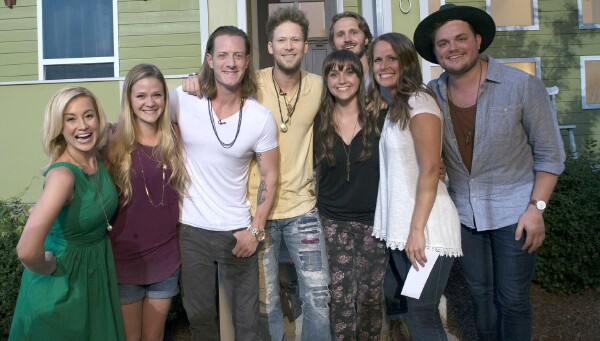 With live remotes in Nashville, Tenn., and Covina, CA, plus much live activity in a Los Angeles studio in which Seacrest was confined, the energy level throughout “Knock Knock” was respectably high, a content quality that should be a requirement for breezy live summer entertainment. (See as strong examples the live installments of Fox’s “So You Think You Can Dance” and NBC’s “America’s Got Talent.) Vivacious Kellie Pickler, the Nashville celebrity participant who banged on a few doors and gave people cash and other prizes, has certainly found her niche as a reality show personality. I can’t say the same for the annoying Ross Matthews, who dashed about Covina doing the same thing. Country superstars Brian Kelley and Tyler Hubbard (aka Florida Georgia Line) joined Pickler in one live presentation (pictured above); soccer and underwear icon David Beckham (pictured below) and hip-hop recording artist Common appeared in taped segments but generated similar excitement. 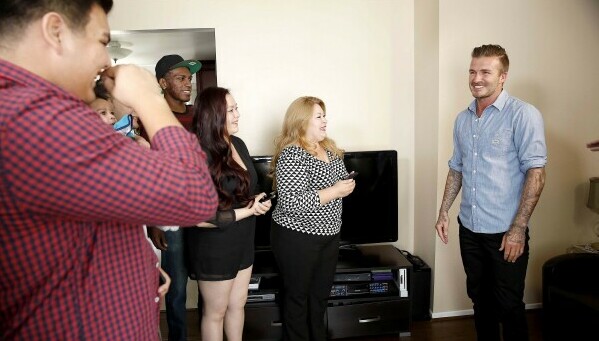 So far I’m making it sound much better than it was. (Maybe a few tweaks will be made going forward.) Problems were plentiful. To begin, the relentlessly cheerful cheerleader Seacrest seemed as though he was stuck in some kind of cage (albeit one filled with dozens of applauding people who comprised a studio audience), hosting the show from so far away. Perhaps if he had been perched behind a desk with screens in back of him showing the home audience the live action in Nashville and Covina – as if he were the anchor for an important live event – it might have played better, or at least with less awkwardness. Apparently Seacrest has participated in “Knock Knock” surprises in recent weeks, which were taped and will be featured in future telecasts. I’m not sure that will help.

It was kind of amazing how quickly the appeal of watching famous people hand over money and prizes to unsuspecting folks on their own front porches faded. Seen a couple, seen ‘em all, or so I thought until a particularly appalling live segment from Covina, in which cash was fired into the air via some kind of fancy cannon (pictured below) and the good people in that neighborhood went nuts, dashing about or crawling on their hands and knees to grab as many bucks as they could. It played as it sounds: An entity with money tossing around an amount of cash that was insignificant to that entity to incite a demeaning frenzy, all of it telecast on live television for someone’s idea of fun, plus profit. 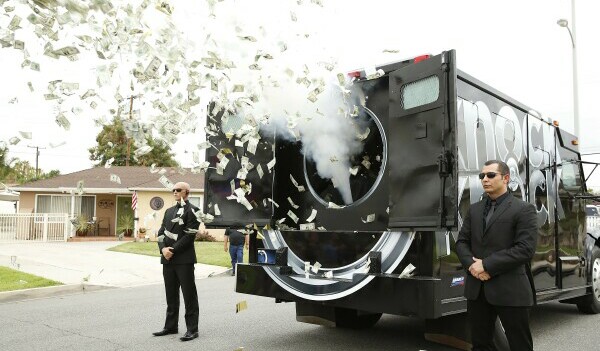 The cash cannon broke the monotony of the hour, but it didn’t do much to foster any respect for any of the people involved. When I tweeted my disgust at what I was watching, one of my tweeps responded by telling me she once witnessed wealthy people on a yacht in San Diego harbor tossing cash at “regular folks” on the dock and delighting in watching them scramble about.

I never much cared for the annual “Oprah’s Favorite Things” installment of Oprah Winfrey’s former (and much missed) afternoon talk show, when Winfrey would jarringly break from the messages of personal growth and spiritual development she so carefully cultivated throughout the year to turn her studio audience into a mob of screaming, wailing, increasingly desperate and dismantled individuals who would dissolve into tears or fall to the floor because Winfrey has given them microwave ovens and shoes. Ellen DeGeneres does something similarly disturbing on her afternoon talk show, but she takes things an unfortunate step further, often coaxing the recipients of largesse from various corporations and sponsors to turn up the juice if they aren’t responding enough for her.

But Winfrey’s show had balance, as does DeGeneres’ program. “Knock Knock” is all about one thing only, and if the first outing was any indication that thing becomes boring and repetitious when it isn’t condescending or exploitative. (Maybe I wouldn’t have been so put off by it had that business with the cash cannon not been included.)

Again, Fox isn’t alone in serving up such stuff, and it may be that with a few changes this show will develop into passable summer fare. If it improves, I can even see a special run of Christmas-themed shows in December. But right now, “Knock Knock” looks to be Seacrest’s second big live TV dud, the first being his gig two years ago as host of NBC’s 10-night epic fail “Million Second Quiz.” (I believe that "American Juniors," the short-lived spin-off from "American Idol" that Seacrest hosted in 2003, was taped but made to appear live.) I won’t count among Seacrest's disappointments his live 2004 syndicated daily talk TV talk show “On Air with Ryan Seacrest,” which lasted only eight months and should have been given more time to develop. It would probably be huge today with the right social media components.