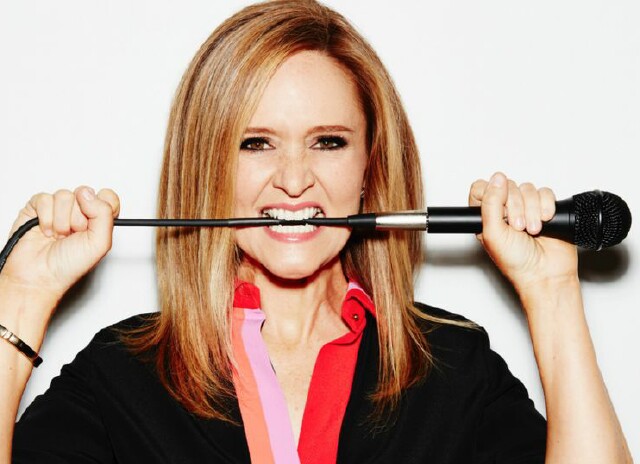 Maybe Samantha Bee should have taken over as host of Comedy Central’s The Daily Show when Jon Stewart made his exit?

Powered like so many other colorful commentators by the horrors and hijinks of the most disheartening presidential campaign in history, the former Daily Show correspondent, already popular with the press, became a true media sensation this year with her weekly TBS series Full Frontal with Samantha Bee.  Meanwhile, the show Bee and Stewart left behind somehow lost the buzz that the media had worked overtime to build on behalf of Stewart’s replacement Trevor Noah, whose talents might be better served elsewhere.

Bee (pictured at top and in the video below with Glenn Beck) has been a delight, using comedy to clarify mixed messages and cut through the crap in which the mainstream media became so inextricably mired on all matters political throughout 2016. I’m sure the fine folks who run TBS are working overtime trying to come up with a way to expand Bee’s presence on their network as we head into the tumultuous Trump Era, because 30 minutes once a week just isn’t going to cut it.  And for that matter, why not move Full Frontal up to 10 p.m., when more people might get the chance to enjoy it? This is timely content that should be consumed at the time of its premiere and not via DVR a day or three later.  (The video below, by the way, may be the best meeting of the minds since those interviews Bill O'Reilly and Jon Stewart used to do with each other on their respective shows.)

While Bee broke out as a superstar commentator by commenting on the insanity of it all, Seth Meyers upped his game over on NBC’s Late Night, fueled by an attack-dog response to everything Donald Trump has said and done in recent months. His A Closer Look segments reliably and savagely deconstruct everything about the President-Elect with a ferocity that feels almost personal.

Here's a hot one (pun intended):

Meyers' Closer Look segments are now in the same rarified category of essential, snackable TV as those Carpool Karaoke videos that are the highlight of his time period competition, The Late Late Show with James Corden.

Who would have thought that two of the hottest pieces of content in all of television would be recurring segments on two nightly network talk shows that are telecast when most people are sound asleep?  Viral video, on YouTube and elsewhere, continues to change every area of media (not to mention, for better or worse, life itself) in the manner MTV once did way back in the early Eighties.