Samsung CES Keynote Focused on Vision, But Was Blurry 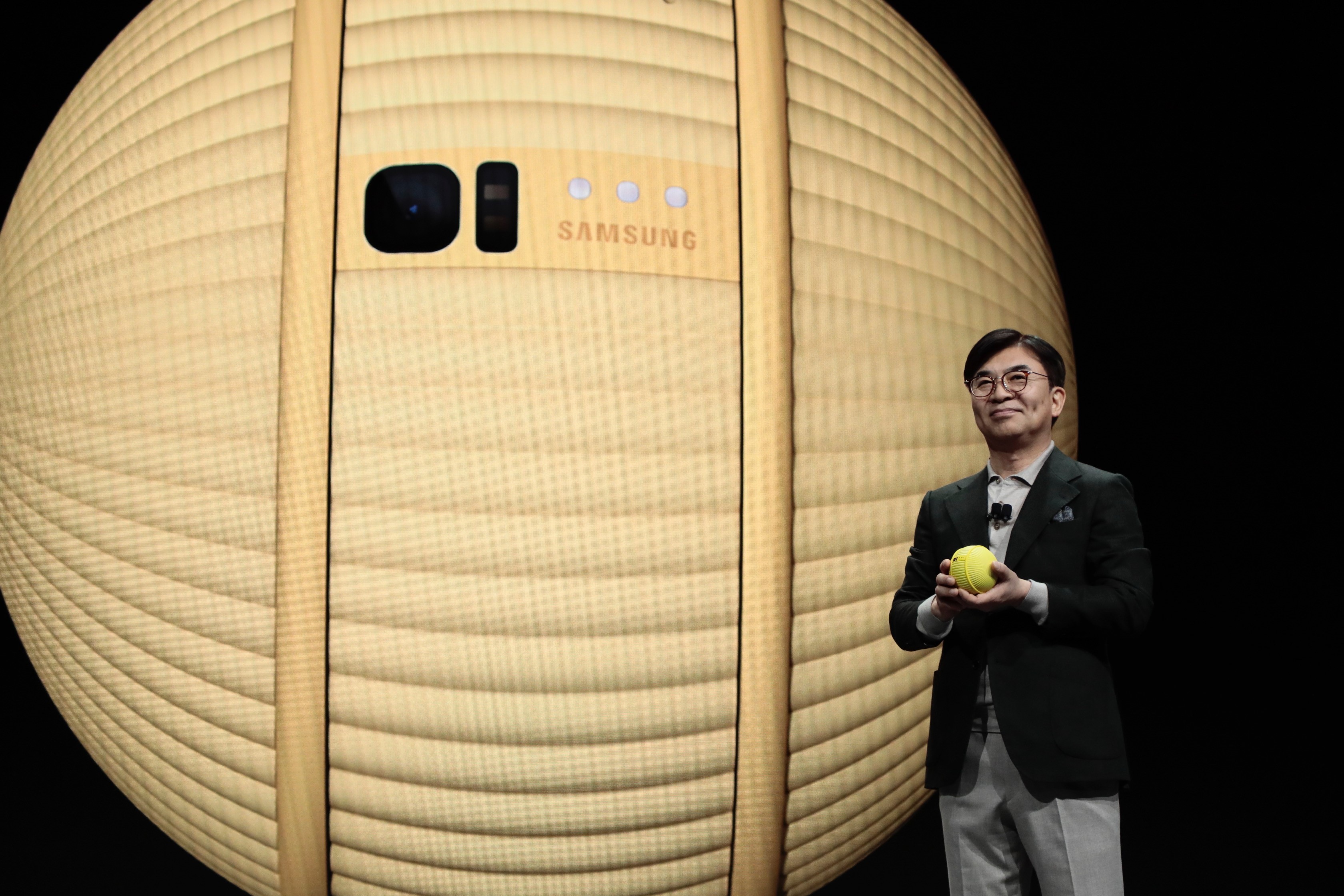 I was fourth row center at the Samsung Keynote at CES given by Hyun-Suk Kim (pictured above), president and CEO, Consumer Electronics Division. Those who know me know that I'm a fan of Samsung products. I'm not "Apple fan-boy, blind to the company's faults" devoted, but I have never been disappointed with any Samsung device that I've purchased (probably because I didn't get the Note 7 or preorder the Fold). So, as the lights dimmed and the requisite "yeah, Samsung" video played, I was at the edge of my seat, quivering in what was definitely not fan-boy anticipation. And, what I got was one of the most bizarre keynotes I think I've ever seen.

Anticipation was high. Samsung has been teasing some type of AI called "Neon" for weeks. It would be something completely new, as the company said it wasn't an upgrade of its "Alexa-like" AI, Bixby. Perhaps the focus would be on its three-quarters bezel-less TV set. Pure screen, except a tiny little bezel running across the bottom. I knew it was unlikely to be the Samsung Galaxy 11, which the company usually previews around Mobile World Congress. (Note: Samsung actually did release a new phone, the Samsung Galaxy S10 Lite at CES, that is getting rave reviews, but no mention of it at the keynote.)

Samsung chose to focus the keynote on people — declaring it to be "the Age of Experience" — versus their products. I can appreciate the focus on people, especially in light of the current technology/data backlash, but this is CES. You have the world's attention (via live streaming and press). Yes, you had an official press conference prior to the keynote, and keynotes should be somewhat visionary and inspirational, but you have products to talk about. And the product that Samsung focused on was a decapitated BB-8-like robot called "Ballie."

For a few minutes, I seriously thought this was a Saturday Night Live skit. Ballie is a ball-shaped robot embedded with AI (and a camera) that can follow you at a safe distance and take a selfie. Given the time that Samsung spent on explaining that we are no longer pet owners, but pet parents, I imagine Ballie is meant to be the "nanny-cam" for your dog or cat.

Samsung is also marketing Ballie as a way to keep an eye on your aging parents. OK, I kind of abide by that, but if Ballie runs out of juice, I can also see my dad — who has very little knee left — tripping right over Ballie.

Now, here's what you need to keep in mind: Ballie is not a conceptual product — it is the product that they chose to spotlight at CES in the premier keynote.

Then things got even more bizarre. We were treated via video to a vision of a smart home, where the home thinks and anticipates your needs via all the devices in a Samsung ecosystem. I kind of dug the idea of the addition of a biosphere to a refrigerator, allowing a vertical panel of your fridge to actually grow fresh herbs. I'm 99 percent sure this is just a concept, but I'll see on the show floor.

Another part of the concept video of the future home was a pair of robotic arms coming down from the ceiling onto your kitchen island preparing your meal. All I could think about with this living-home concept was this is how I am going to die. My kitchen will realize that I'm the one who eats all the Talenti, and one day AI will decide that, as I clearly don't respect the AIs effort to keep me healthy and in shape, I could be a threat to its mission, prompting those robotic arms to reach down and strangle the life out of me.

Last year, Samsung introduced healthcare product GEMS (Gait Enhancing and Motivating System), an exoskeleton designed to give support and balance via AI to people with mobility issues. I absolutely see the health benefits of this product; for example, I can see it helping with my dad's aforementioned knees.

So, during the keynote, Samsung has a fitness model, outfitted with the exoskeleton and Samsung AR glasses, work out with the help of a virtual fitness trainer. WTF? Samsung has AR glasses? That's huge news! Apple is still a year or two away from that and I just saw Samsung's huge leap towards perfecting this technology as a throwaway piece in a cheesy trade show bit about GEMS? I am going to stalk down those AR glasses today, but this, perhaps, could be absolutely game-changing for the XR world. Yet, the focus was the exoskeleton that no one (who wouldn't need one aside from health reasons) will ever work out in.

There were a couple of interesting moments of the presentation. Samsung, in partnership with Kaiser Permanente, has created an app-based platform to allow post-cardiac patients to rehab at home, which has the potential to save and extend many lives. Samsung Next showed its vision of a smart city ecosystem to deal with logistical overpopulation challenges, as megacities (cities with a population of more than 10 million) are set to grow dramatically over the next decade. The company also highlighted a progressive partnership with U.S.-based Greystar Real Estate, a large global real estate developer, to create smart residential buildings that are fully integrated with Samsung technology.

Lastly, Hyun-Suk Kim returned to the stage and spent a few minutes reiterating Samsung's commitment to data protection and privacy. The company is moving most of app processing away from the cloud, stating that Samsung will never sell data to third parties without "prior and direct consent from you. We'll stand by this promise." Kim announced that, to go further to protect data, the foundations of Samsung's efforts will be on-device AI, EDGE computing, and blockchain.

Generally, in a year when you don't have much to say and are given the opportunity to present a keynote, you may come up with a broad "vision" message and a more aspirational presentation. I just believe that Samsung had more than enough to wow the crowd with product-wise that it could have toned down the vision thing. While I may not love the "Ballie" brand, I do think there is likely some extraordinary technology embedded into it. But, as a showpiece for a CES keynote, it bounced right off the goalposts.

Oh yeah, remember that whole Neon thing I mentioned earlier? The one that Samsung has been teasing for weeks that wasn't mentioned once? Well, the company did finally release information about it. They are digital video avatar chatbots that can learn people's preferences and respond to their questions in a "human" way. Imagine giving Alexa or Siri a hyper-realistic human body. Samsung believes that these Neons may be licensed by companies to be fitness instructors, yoga instructors, TV anchors, salespeople, movie actors, and other roles previously done by humans. I'm going to go watch Wall-E now.