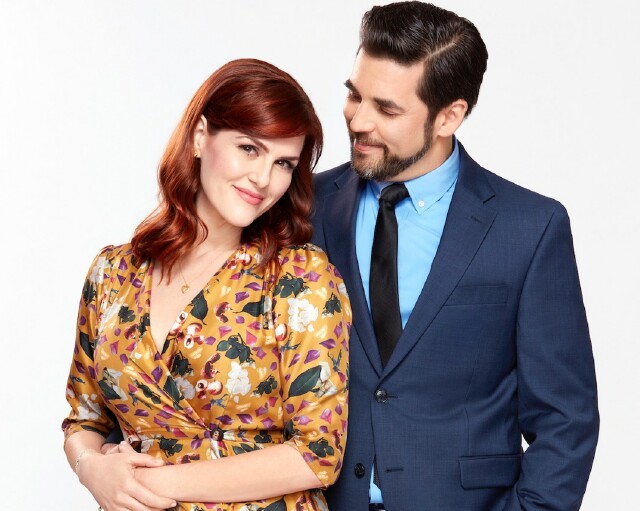 Actress Sara Rue returns to Hallmark Channel this weekend in the premiere of True Love Blooms, part of the network's annual Spring Fever programming event.  For Rue, who made her Hallmark debut in 2017's All for Love, the wait in returning to the network had good reason; True Love Blooms was her baby, based on an idea by, and executive produced by her.  "This one was really exciting," she told MediaVillage in an exclusive interview.  "I've sold pilots as a writer and movie ideas with creative teams, but never anything that was greenlit. There are so many steps to the process, so when I spoke to [the people at] Hallmark and they said, 'Congrats, we're going to make this,' I was like, 'Really?' I couldn't quite believe it.

"Many times I thought things would go and didn't for one reason or another," she continued.  "So, having Hallmark love the idea and having my friend Elias Madias as the writer made it fun developing the script.  I don't think it all seemed real till we were on a plane to Florida to start filming in St. Petersburg."

In True Love Blooms, Rue plays Vikki George, the operator of a local community garden started by her late father.  With so many childhood memories attached, Vikki takes great pride in the community space, so when developer Chace Devine (Jordan Bridges, pictured above with Rue) threatens to build high-rise condos on the site, Vikki goes into battle mode.  As the dueling gardener and developer plead their cases to one another, romance shy Vikki and Chace begin to realize they're not so different.

The film’s through line hit home for Rue.  "Living on the East Coast, both of my parents were involved in a community garden on 96th St. and Broadway," she revealed.  "We'd go there to garden so I do have these really happy childhood memories.  Growing up in New York it was really impactful to dig in the dirt and watch a flower grow because generally, you're not around nature.  That was until a developer came in.  They ended up moving the garden much further away and built a giant building in its place.

"It's something that stuck with me as I could see the garden from our building and I watched the [new] building going up," she added.  "I always thought about that garden and my dad petting a sleeping bumblebee and then running my finger over it.  Those are things I think about all the time, having come from a long line of gardeners.  I just wish my thumb was greener."

As if having her idea realized and come to fruition wasn't enough, the casting of Bridges in the complex role of protagonist/villain/love-interest Chase only added to Rue’s lucky-streak.  "I was so excited he came on board," she shared.  "It's a tough role and he did such a good job.  He's really likable and super-believable; we got along and had great chemistry.  Jordan likes to work hard, and I really appreciated that.  Sometimes it's not the case.  I'm so grateful because it's a pivotal role and if it didn't work, the whole movie didn't work.

"One of the things I liked most about this story is you see these romances and you think, 'Why aren't they just together?’” she continued.  "With us, he's literally destroying my dream, so there's real conflict.  We walked the line of finding the chemistry and charm between the two of us and clicked right away.  He's the kind of actor I like working with.  I referred to him as my set husband -- that's something you always want."

While Rue has never personally gone up against “the man” on community issues, having two young kids she said she is actively involved in her own community. She also recently had the pleasure of meeting Los Angeles Mayor Eric Garcetti.   "I was very respectful of his time and he was super nice,” she said.  “I also voted for him, but I didn't bring up any of my community issues."

She's also thankful to the community of Hallmarkies who have embraced her. “The whole 'Hallmark thing' is so cool," she smiled.  "The lady who works at the coffee shop at LAX recently told me how much she loved my first Hallmark movie, then asked if I had another one?  I told her I'd just finished one and she was so excited.  It's really nice to connect and with Hallmark, I feel people actually get together to watch the movies on a Saturday night when they air -- families get together and it's nice.

Rue, who just completed a pilot for NBC, continues her recurring role on ABC’s American Housewifeand has had a recurring role on CBS' Mom, also has many more irons in the fire with Hallmark.   "We've pitched ideas, with more in development,” she said.  “I'm doing what I love, have a super supportive husband to help, and my eldest daughter will occasionally tell me she likes what I do!  But her favorite thing about what I do is craft services as she gets cookies."