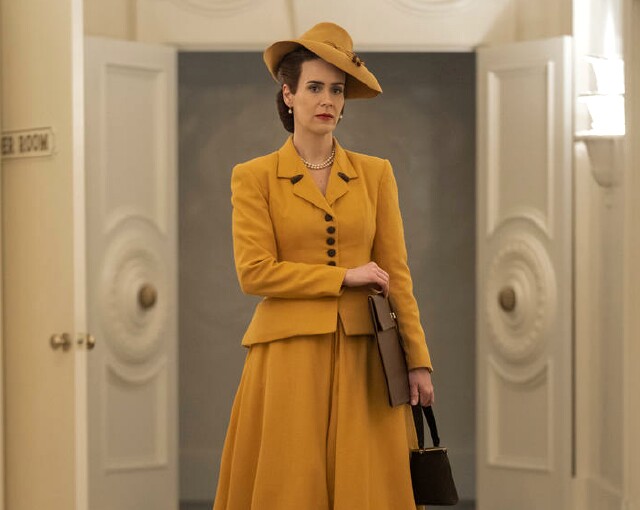 Sitting through dozens of program panels during a traditional in-person Television Critics Association tour while feigning enthusiasm for all of them can be a challenge for even the most dedicated television critic.  That is also true at present, as 16 networks and services (including PBS) continue to offer TCA members (and other invited television journalists) virtual panels for established franchises and upcoming shows in the “comfort” of their own homes.  Not everything is compelling.  Not everything sends a jolt of energy through the room (physical or virtual).  So, when a new show looks to be something special the excitement is palpable.  That happened with the first panel of Netflix’s virtual lineup -- the upcoming dark drama series Ratched.  (A reminder: The official TCA summer tour has been cancelled.  The current experience is a substitute effort orchestrated by PBS and CTAM.)

Partly because of its superstar executive producer (Ryan Murphy, who knows a thing or two about bringing dark programs to television), partly because of its accomplished cast (including Sarah Paulson, Sharon Stone and Cynthia Nixon), partly because it is connected to a legendary movie (Louise Fletcher gave an Academy Award-winning performance as the series’ title character in the much-honored 1975 classic One Flew Over the Cuckoo’s Nest) and partly because it has one of those fantastically kinetic trailers that leave even the most overworked critic anxious to see more, Ratched immediately stood out as “one to watch” in the fall.  (It debuts on September 18.)  Indeed, even if the upcoming television season wasn’t truncated by production shutdowns due to Covid-19 -- even if it were jam-packed with exciting new and returning programs as usual -- Ratched would likely be a highlight on everybody’s list.  (The only other new series previewed so far during the CTAM portion of this virtual tour that has generated similar excitement is the HBO special Coastal Elites, a satire about people coping with the overwhelming present-day pressures of politics and the pandemic, shot entirely under strict quarantine guidelines.  It is worth mentioning that Sarah Paulson is one of the stars of that show, too.)

Paulson (pictured at top), who is also an executive producer on this project (more on that below), was asked how Nurse Mildred Ratched became the cruel caregiver she was in Cuckoo’s Nest?  She said it all tracks back to when she first entered the hospital where she would spend her career.  “She absolutely has a plan upon entering the hospital in terms of her ultimate end goal, which is to be reunited with someone that she loves very much,” Paulson previewed.  “It is planned as much as something like that could be planned, meaning she needs to get a job at that hospital.  After that, she’s just not quite sure what will happen.”

She went on to refer to Fletcher’s award-winning portrayal of Nurse Ratched as “one of the most masterful performances in cinematic history.”  Watching it gave her “an opportunity to have a real spine of the character sort of built in, at least in terms of knowing where I was going with it.  But so much of this story obviously predates that and is an imagined idea of what Mildred’s life might have been before she found her way to that hospital.

“It's both a blessing and a curse because I do recognize that some people will be looking for Louise Fletcher, but they're not going to find her -- and I don’t want them to be disappointed,” she added with a laugh.

Paulson spoke about the relatively minor challenges the production faced in securing the rights to the character of Mildred Fletcher, revealing that Michael Douglas, who was an executive producer on Cuckoo’s Nest (which won multiple Academy Awards including Best Picture), is a producer on the series.  She also mentioned that she has not heard from any of the actors from the Cuckoo’s Nest movie, nor did she reach out to any of them, including Fletcher.  “But I thought about [her] every day that we were shooting it, and I hope that in the coming season there will be some Louise Fletcher,” she added, presumably as a tease.

She also noted that, during development of the project, she was a producer on the show rather than an executive producer.  That changed on the first day of production.  “Ryan came to me and said, ‘I don’t like looking at the call sheet with everybody’s name up there.  Your producer credit isn’t high enough.  I’d like you to be an EP as of today.’”

“I was like, ‘Okay.  I’ve never done that before, but I’m going to try my best to do that.’ And he said, ‘You deserve it, and it’s important not only for you to see it on the call sheet, but for the crew and everybody involved to know that that is your position here.’”

Murphy, of course, has been known for hiring and advancing women in all aspects of his production company and his actual productions, dating back long before the #MeToo movement came about.

“Ryan was incredibly empowering for me, and always has been as a friend and as a collaborator and a boss,” Paulson said.  “It was a wonderful new dynamic in our relationship to go from being an actor in his project to having -- power is the wrong word -- opportunity and a voice that he’s been interested in hearing.  I felt very legitimized and recognized by everyone that we were working with.  I was very, very grateful for that.” 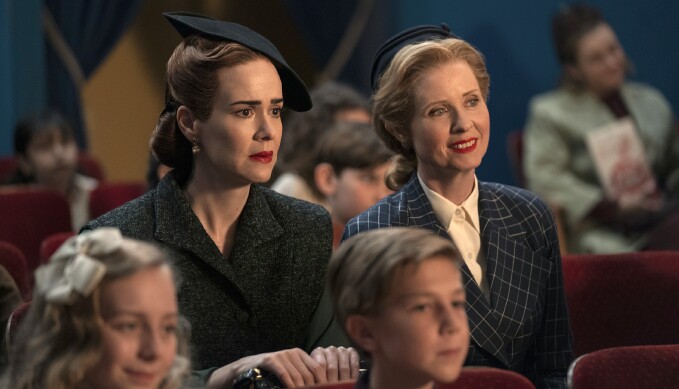 Being a part of Ratched was also a special experience for Cynthia Nixon (pictured above with Paulson), who plays a political campaign manager named Gwendolyn Briggs.  “In the years since Sex and the City ended, I’ve [played] a lot of complicated and, I think it’s fair to say, twisted people, and those are fun,” she said.  “Playing Gwendolyn was such a departure for me, because the way I see her [she] is such a beam of light.  I think Ryan, because of my gubernatorial run, sort of thought of me for this.  Part of Gwendolyn’s incredible optimism is that she feels that not only has she carved out a life for herself in politics, but she has great ambitions to run for office herself.  Which, as we know, is very challenging even today, but in 1947, really means that she has a big picture of what could be possible.

“In trying to think about Gwendolyn and how she walks, and how she dressed, what she looked like, how she carried herself, I shared with the costume department some photos of a woman named Lorena Hickok, who was a gay woman,” she continued.  “She was an important journalist, but she was most known for being Eleanor Roosevelt’s lover in the run up to the White House and then beyond.  So I pulled a lot of inspiration from reading about her life and some of her letters, but also particularly the way in which she tried to pass as straight in this very mainstream world, and yet had love affairs on the side and was a queer woman.  [I tried] to imagine what a professional woman, who was also a lesbian, was like in the ‘40s, and how she carried herself.”