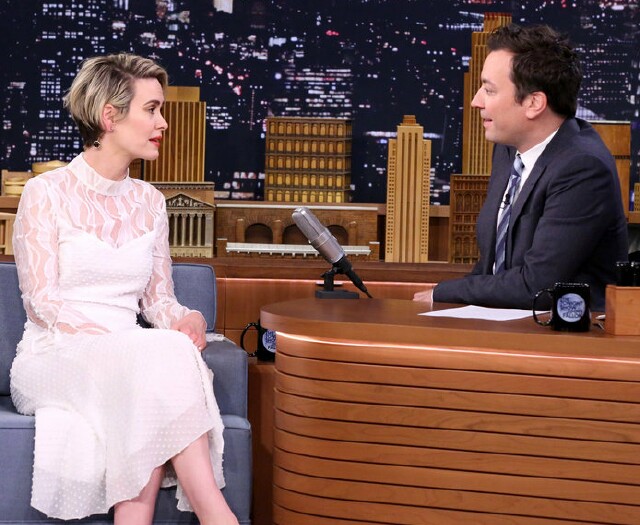 Coming in at a tie for No. 24 in the Top 25 countdown are Sarah Paulson and Kate McKinnon making memorable music on NBC late-night franchises. To begin with the most recent, the edition of NBC’s Saturday Night Live that was telecast just five nights after the most startling presidential election outcome since Truman trumped Dewey gave us one of those cold opens that make such an impact on this show. Remember when New York City Mayor Rudolph Giuliani and members of the NYPD and NYFD opened the first show after 9/11? Or when cast member Cecily Strong, speaking in French, extended love and support to the families and friends of those killed in the Paris attacks on November 13, 2015?

McKinnon, in the Hillary Clinton pantsuit and wig that she had worn so often during the previous 12 months, sat at a piano and performed Leonard Cohen’s timeless classic “Hallelujah.” (Watch it below.) It was a stirring tribute to Cohen, who had passed the day before the election, and a soothing message of hope to the millions of Americans gobsmacked by Trump’s victory, which was made all the more startling by the mainstream media’s egregious approach to this most unnerving of elections, right up to and including Election Night.

At the end of her performance, McKinnon looked directly into the camera and said, “I’m not giving up, and neither should you.” It worked coming from McKinnon simply being herself or being the “character” with which she will be most identified for years to come.

McKinnon’s performance wasn’t the only pleasant surprise this fall in NBC’s essential late-night comedy arena. Appearing October 6 on The Tonight Show Starring Jimmy Fallon, Sarah Paulson (pictured at top with Fallon) proved she has mad rap skills with a rousing rendition of Salt-N-Pepa’s infectious 1993 hit “Shoop.” (You can watch it below.) After years of watching Paulson play tortured souls in FX’s American Horror Story – not to mention her masterful portrayal of Marcia Clark earlier this year in the same network's The People v O.J. Simpson: American Crime Story – her effortless playfulness was enough to make any viewer giddy.