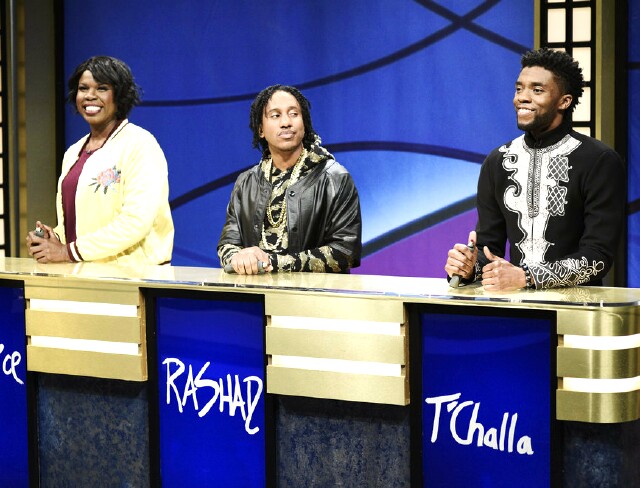 Saturday Night Live, NBC’s crown jewel, has always been known for its over-the-top and hilarious yet (often) socially conscious sketches.  But this past weekend the show’s comedy stock rose even higher with the latest iteration of its fictional game show Black Jeopardy -- “Where the prize money is paid in installments.”  Previous versions of the sketch have featured, among others, Elizabeth Banks, Drake and Tom Hanks (the most humorous being the latter), but with the recent success of the groundbreaking Marvel film Black Panther came the fake game show’s best celebrity guest yet -- King T’Challa himself (played by host Chadwick Boseman).  Like Kenan Thompson’s host persona, Darnell Hayes, said, “This might just be the blackest Black Jeopardy yet!”  It was; no contest.  (Leslie Jones, Chris Redd and Chadwick Boseman are pictured above, left to right.)

The whole sketch was great, and since explaining jokes has never in the history of jokes made them more funny, I’ll try and refrain from explaining all of them.  Having said that, there are three or four key moments that were pretty relentless in the comedy department and consequently ended up making the whole sketch soar.

In the category “Fid’na” (as in, “I’m fid’na go to the store bro, you want anything?”), the question read, “This is the reason your cable bill is in your grand mamma’s name.”  Maybe it’s just me, but I automatically knew it probably had something to do with one’s credit.  T’Challa had a different idea, however.  “What is, ‘to honor her as the foundation of the family’?” he answered with great confidence.  This was when I first lost it (laughing, that is).  Darnell (below left) responded, “Hmm.  That’s really nice.  It’s wrong, but it’s really nice.”  It was the combination of T’Challa’s seemingly genuine belief that there could be no other answer, and the foreign inflections and cadence of his speech that really brought the idea home that where he was from was drastically different from the more self-centered traditions of his American brethren. The real answer, by the way, was, “What is, ‘cause I’m fid’na get a car and I don’t need all that on my credit’?” 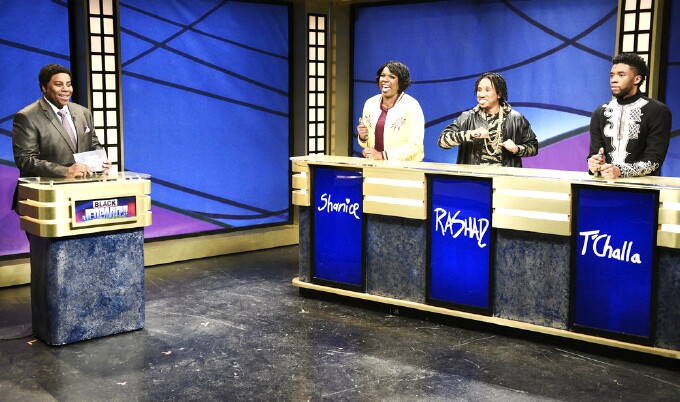 The next question that really drove this idea home was just as funny.  In the category “Grown Ass” the question was, “You send your smart ass child here ‘cause she think she grown.”  Of course, T’Challa buzzes in and his answer is as follows: “What is, ‘to one of our free universities where she can apply her intelligence and perhaps one day become a great scientist’?”  At this point I was in literal tears (of laughter).  Wakanda is apparently so advanced that not only are their higher education programs free, but their children are so well-behaved they do not use the term “smart ass” in reference to them.  Hence, the concept of sending them somewhere when they are being a “smart ass” is an equally foreign concept to the Wakandan king -- the actual foreigner in the situation (which is very Coming to America if you ask me).  Oh, and the answer to the question? “The answer I was looking for was, ‘Out my damn house,’” said Darnell, adding, “But, you know what?  I’ma give it to you, T’Challa.  Y’all must not have no mean streets in Wakanda.”  Exactly.

“Let’s go to ‘Aw Hell Nah’ for eight hundred,” said the King, and the question was, “The policeman says there’s been some robberies in your neighborhood and asks if you have ‘any information.’”  Now, instantly I said to myself, “No snitchin.’”  It’s a heavily debated policy that’s been the topic of rap songs, t-shirts and even parental admonishments.  Sh*t, I just told my daughter to stop snitching the other day.  So, how did the mighty king answer?  Like so: “What is, ‘not only do I tell this man what I know, but I also assist him in tracking down the offender. After all, our ministers of law enforcement are only here to protect us.’  Is this correct?” Cut to Darnell, face scrunched up and shrugging, like his son just asked him where babies come from.  “I mean, it should be,” he said.  Their ways, as traditional and old school as they may seem, are undeniably positive and ultimately better ways of living, and even though many people of color are seen as “the same” (which everyone is, technically), Wakandans and Americans have almost conceptually opposite lifestyles.  Darnell punctuated this with, “I’m thinkin’ you haven’t spent much time in America.”

So, what was the straw that broke the comedy camel’s back? After the messages from the fictional game show’s sponsors -- which included the hilarious line “Sprite: How did we become the Black soda?  We don’t know.” -- T’Challa picked “White People” for $400.  The question: “Your friend Karen brings her potato salad to your cookout.”  T’Challa, finally seeming to get the hang of the show, asked if Karen is Caucasian.  Darnell replied that she is, which is followed by Marvel’s king making the following deductions from that point alone: “Oh I understand.  It is noble that she would volunteer to cook for everyone, and although I have never had potato salad, I sense that this white woman does not season her food.  And if she does, it is only with a tiny bit of salt, and no paprika.  And she will probably add something unnecessary, like raisins.  So, something tells me that I should say, ‘Aw hell nah, Karen.  Keep your bland ass potato salad to yourself.’”  Darnell, myself and the studio audience all cheered in unison.

Even though there are thousands of miles between our homelands and hundreds of years of seclusion separating us; even though our interactions with our elders, children and law enforcement are all drastically different, and even though one of our countries and cultures is straight up fiction, there’s still one universal truth that all Black people can apparently agree on, and SNL agrees on, too:  It’s that white women don’t season their food.  It seriously doesn’t get any better than that.  So, to all the Karens of the world, remember the words of the Wakandan king:  “Keep your bland ass potato salad to yourself.”