"Saturday Night Live" Shows Us How to Move Forward 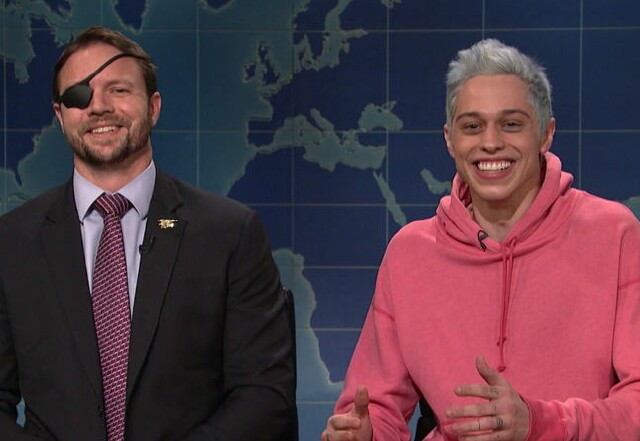 At last – something truly worth celebrating on television this season.  Something so profound, so forward-thinking, so unifying and so entertaining all at once that I can’t help but smile every time I see coverage of it on television.  The incident in question happened last weekend on NBC’s Saturday Night Live, of all places, given the unrelentingly political separatism that defines so much of its content.  But a priceless few moments on the most recent show pulled everyone together and acted in a way our political leaders and the media have long since forgotten how to do.  Let’s hope everyone in Washington, D.C., has been watching it on a loop of some kind somewhere.

I’m speaking of the surprise appearance during the Weekend Update segment by former Lt. Commander and Congressman-elect Dan Crenshaw, who lost an eye while serving a third tour of duty in Afghanistan.  His heroism and resultant misfortune had been mocked by Pete Davidson (who otherwise never fails to make me laugh) the prior Saturday on SNL’s Weekend Update when he suggested that Crenshaw looked like “a hitman in a porno movie.”  Davidson appeared again this week on Update to express regret over what he said.  “On behalf of the show and myself, I apologize,” Davidson said.  “The man is a war hero, and he deserves all the respect in the world.  And if any good came of this, maybe it was that for one day the left and the right finally came together to agree on something … that I’m a dick.”

Indeed, the blowback generated by Davidson’s poor choice of words (surely sanctioned by everyone at SNL and NBC who needs to sanction things before they are said on-air) was so intense that I began to wonder if the kid would be fired.  (I had been wondering the same thing about Alec Baldwin.  Would NBC boot him off SNL and would ABC cancel his Sunday night talk show after he was arrested for allegedly punching a man in the face?  We’re all very sensitive these days, you know.)

But SNL and NBC did something much better – they took a terrible situation and turned it into something productive that defied the P.C. police and the renegade right to complain.  Crenshaw, who had taken the high road during the week when asked about Davidson’s callous comment, “surprised” Davidson during his appearance on Update – as potentially awkward a moment on SNL since Tina Fey crossed paths with Sarah Palin.  And here’s the beauty of it -- both guys came out ahead.  It was something of a star-making turn for Crenshaw, who proved to have marvelous comic timing and spot-on delivery, happily taking a few shots at Davidson and finding that he enjoyed doing so.  (His best moments came when he thanked Davidson for “making a Republican look good” and when he said that the young blue-haired comic looked like "if the meth from Breaking Bad was a person.")  Davidson, who is often funny in the controversial way of someone unencumbered by filters or sensitivity chips, played humble like a pro.

When the comedy was done Crenshaw delivered a stirring commentary in which he said that one of the lessons of the SNL snafu was that Americans can come together and forgive each other, and (just in time for Veterans Day) he asked everyone to thank all veterans for their service and add two simple words: “never forget.”  Crenshaw also paid tribute to the brave firemen and first responders who rushed into the Twin Towers on 9/11 and never came out – among them Davidson’s father, firefighter Scott Davidson.  Pete was seven at the time.  He has been very open, including in his comedy, about the psychological trauma he suffered and continues to endure as a result, just one of thousands of stories from that terrible time.

Here’s the segment.  And here's hoping SNL leaves it on YouTube for years to come.

We all say and do stupid things from time to time, and for many people such moments are exponentially magnified by millions on social media.  As this particular social contagion has spread the results have been damaging to everyone.  Certainly, our current commander in chief hasn’t helped matters in that regard, but neither have the aggressors on all three cable news networks, not to mention countless print, radio and internet outlets.  Pompous prognosticators with opposing agendas foul the air everywhere, stirring their blindly loyal followers into a frenzy with carefully compartmentalized facts without ever stepping back and asking, “How do we fix this?” or “Can we do better?”  SNL did that and more … it fixed its latest publicity nightmare while also proving that much good can come when people from both sides of the political spectrum sit down, chill out and talk to each other with respect and, if possible, good humor.

It is certainly something to keep in mind as media content gets edgier, comedians get looser and people everywhere tweet before they think.