Sci Fi Channel President Dave Howe: Lunch at Michael's (But at A Voce) 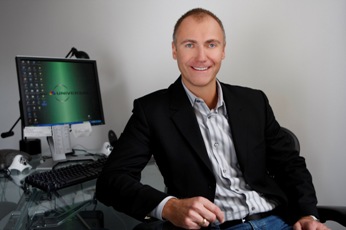 We continue our Lunch at Michael's® interview series, introducing you to fascinating industry leaders and excellent restaurants in New York and around the country that are popular among media, advertising and entertainment industry executives. This week, Ed Martin (who wrote this column) and I met with Dave Howe, president of Sci Fi Channel, at A Voce at Madison Avenue and 26th Street, where chef Andrew Carmellini is generating great "word of mouth" with food and ambience that is attracting fans from around the world. - Jack Myers

It is a measure of the success of Sci Fi Channel that the season premiere of its signature series Battlestar Galactica on April 4 is stirring the kind of media interest and Internet buzz generally reserved for the biggest broadcast shows or blockbuster motion pictures.

What's behind the burgeoning enthusiasm for this show by viewers and critics alike, especially given the unusual history of the Galactica franchise, which began 30 years ago this September as a prime time series on ABC that was too cheesy to be believed, even amid the disco music and leisure suits of the Seventies? The new and vastly improved Galactica “is about characters and issues we can all relate to, whether it's religious fundamentalism or genocide or internal conflict within the confines of a community,” Sci Fi Channel president Dave Howe told Jack Myers and myself last week over lunch at midtown Manhattan restaurant A Voce. 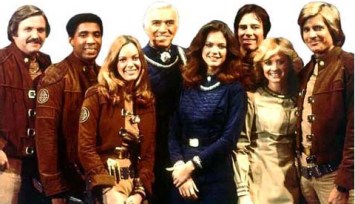 The cast of the original "Battlestar Galactica"

“There are a lot of things in it that have nothing to do with science fiction and everything to do with human nature and human relationships and the struggle for survival,” Howe explained. “What's great about Galactica is it transcends the genre, irrespective of whether you really enjoy science fiction fantasy. It functions at a level that makes the trappings of science fiction irrelevant. It's a very intense, emotional character drama. The show tackles those everyday themes that we're all living through now.”

The first ten episodes of Galactica's fourth and final season will play out in April, May and June. (SciFi.com will stream the season premiere at 12 p.m. ET on April 4, nine hours before its television debut.) “We haven't decided yet where we'll schedule the final ten,” Howe said. “It could be later this year or very early in 2009.”

Most television network presidents would be satisfied with the level of success enjoyed by the Sci Fi Channel overall and Battlestar Galactica in particular, not to mention the status of scifi.com as “the world's biggest genre Web site.” But Howe and his team have set their sights on something much bigger. “We have to broaden our brand and bring more people into the tent,” he commented. “I spend a lot of time talking with advertisers about how mainstream sci fi is, because everybody assumes it's a narrowly targeted genre. It's not. Seventeen of the top 20 all time worldwide box office hits are Sci Fi fantasy. Spiderman.Lord of the Rings. Harry Potter. Star Wars. There's something for everyone. 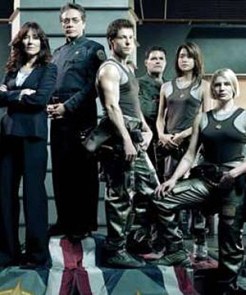 “The words Sci Fi bring with them a narrow mis-perception,” he continued. “We just have to keep breaking that down and making the brand accessible. At the moment we're a cable TV brand. The challenge for us is, how do we own the category? How do we grow a cable brand into affinity lifestyle areas? How do we build businesses alongside Sci Fi -- video gaming businesses, mobile businesses? MTV owns music. ESPN owns sports. We can own the whole sci fi fantasy category across everything, not just TV!”

Toward that end, Sci Fi last December launched the technology-oriented dvice.com, the first of three new sites focused on the interests and lifestyles of the Sci Fi audience. “We've taken the audience that comes to scifi.com, young males, and looked at what their affinity areas are,” Howe said. “The three things that interest them are technology, sci fi fantasy entertainment and video gaming. What we're creating is a portfolio of young-male skewing web sites that will all be powered by Sci Fi. We're going to launch a video gaming site in April. By the end of the year we'll have an entertainment site. We can cross promote between these sites and aggregate the advertising sales.”

Expanding the reach of Sci Fi Channel's content on mobile platforms is also a priority, as is the development of new business opportunities. Sci Fi recently entered into a relationship with Virgin Comics to jointly create comic book properties that may become ongoing series on the network. A television adaptation of the first such book, the recently published The Stranded, is already in development.

Also on Howe's agenda is the long-awaited return of one-time Sci Fi Channel hit Farscape as a Web program and the development of a new series to take the place of Galactica when it concludes. He has high hopes that one of two upcoming pilots, Warehouse 13 and Revolution, will become “that next great Battlestar show.” He is also excited about Caprica, a two-hour back-door pilot for a series that is actually a prequel to the current Galactica.

At first blush, it may seem that American television would have been the least likely career path for Howe, who grew up in England and is the youngest son of highly respected soccer coach and manager Don Howe. His three brothers, he recalls, were “obsessed” with soccer, while Howe was more interested in music, especially the piano. But the specifics of his father's fame led Howe to an early awakening about his career goals.

“The downside of having a famous soccer coach for a father was, I got sick of being mobbed every time we went to a restaurant by people who wanted his autograph,” Howe recalled. “The upside was, he was very involved in the media. He did a lot of commentaries for soccer games on broadcast TV. He was constantly in TV studios and he used to take me with him. So from a very early age I got completely hooked on the whole TV side of it. Literally from age six I said I wanted to work in TV.”

His father was very supportive of his early career interest. “He got me more involved, introduced me to people,” Howe said. “Very quickly I figured out the path to getting into TV. In school I made sure I was involved in all the theater stuff and the media stuff. In high school I made sure I appeared in musical productions. One of my big claims to fame was, I was in The King and I. I played LunTha, the male romantic lead. I was in the chorus in Oklahoma. Every year we did a big Rogers and Hammerstein musical. I was always in it. Then I got much more involved in the backstage stuff. When I had to figure out what to do at university, that was a tougher decision. In those days in the U.K., no one did media studies or anything but traditional subjects, like English or geography or physics. I decided I was going to do languages.”

Howe's passion for music and dispassion for soccer were shocking to his parents, he recalled with a laugh. “They didn't know where it all came from. They were a working class family from the industrial north of England, and it was a surprise to them. But because I had three brothers who were all completely obsessed with soccer they let me get away with it. It's like there was a novelty attached to the fact that I was different.”

His parents “were incredibly tolerant, incredibly open, incredibly fair in terms of how they treated us,” Howe says. “They said, 'We'll still love you whatever you decide to do.' It was a really great environment to grow up in.”

Howe and his partner, with whom he shares a passion for travel, have been together about 20 years. “That's another thing my parents were very tolerant of,” he laughs. “I did not like soccer, I was into TV and music, and then I turned out to be gay! For them it was, God, what more is there to come?”

The one thing his folks still cannot get a handle on is their son's current position as president of an American television network. “They're sort of shocked,” Howe said with a smile. “Even if I spent two days explaining to them what I do and how I do it and why I do it they wouldn't retain it. They don't have any sense of what it really means. They're both smart people, but they have no benchmark.” The careers of Howe's brothers are easier to process. His oldest brother is a truck driver, the next oldest is a software developer and his youngest brother runs a car repair shop.

Howe, who joined Sci Fi Channel in 2001 after spending 15 years in a variety of capacities at the BBC in London, looks back on the Emmy winning 2002 mini-series Steven Spielberg's Taken as the production that put the network “on the map in the Hollywood community, in terms of writers and talent. People started pitching shows because they saw us as a platform for storytelling that they couldn't do on any other network. Suddenly we were a player in Hollywood, which we had never been before. It's the halo effect, which you can never put a number on.”

He is especially proud of Sci Fi Channel's public affairs initiative Visions for Tomorrow. “The thing about science fiction in literature is its been quite nihilistic, it's been doom and gloom, it's been about nuclear winters, the end of the world, etc.,” Howe observed. “What we want to do with Visions is to own an optimistic view and enable people to take a more proactive role in making sure the world doesn't end in 50 or 100 years because of global warming and other problems. We launched it last year. We'll take it to the next phase this year with ten things to read, watch and do to save the world. We'll use science fiction as an education platform. We have put together an advisory board of great thinkers covering science, literature, architecture and government.”