Videos of the Week: Sex and Skin on “Dancing with the Stars” 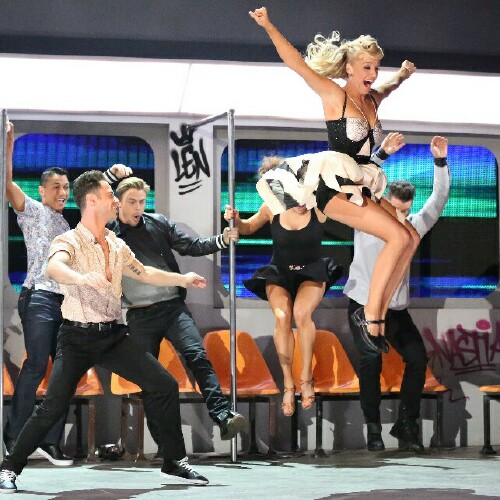 This week’s top videos are actually segments from ABC’s “Dancing with the Stars,” which marked its tenth anniversary with a two-night extravaganza that was memorable for many reasons, not the least of which was the cavalcade of past celebrity contestants and winners who filled the dance floor and the seats in the studio. After a decade, “Dancing” remains the closest thing to a true variety series offered by an American broadcast network – a genre at which broadcast once excelled but then let slip sadly away. (Just click on the images below to enjoy the show.)

Dance is a matter of personal taste, of course, and on that subject I have no appreciable taste at all. But two performances in the anniversary shows stood out for me. The first, on Monday’s show, was current season competitor (and champion Olympic gymnast) Nastia Liukin and Sasha Farber dancing to Andy Grammer’s infectiously energizing “Honey, I’m Good” on a set that resembled a speeding subway car. Nastia has been dancing this season with Derek Hough, but he recently sustained an injury that prevented him from fully participating on the show and led to her temporary pairing with Sasha. Derek nevertheless choreographed the number and appeared in it, moving about in a very reduced capacity. Extra bonus: Grammer (who’s Web site features a cool interactive interface) was on hand to perform the song live. This may have been my favorite “Dancing” sequence in the history of the show.

The other “Dancing” routine that stood out this week, for wholly different reasons, featured the return of Season 1 winner Kelly Monaco, paired with Val Chmerkovskiy. They danced to the Brian Setzer Orchestra's rendition of Ernesto Lecuona's “Malaguena.” They were wild. They were wet. And by the end of the routine they were practically naked. The hotness Kelly brings to her role as Samantha Morgan on “General Hospital” was chilly by comparison. If everything on broadcast television was this attention-grabbing perhaps it wouldn’t be losing so much of its audience to other media. Watch and see:

By the way, that performance reminded me of another similarly steamy dance by Kelly and Val three years ago during the show's All-Star season.