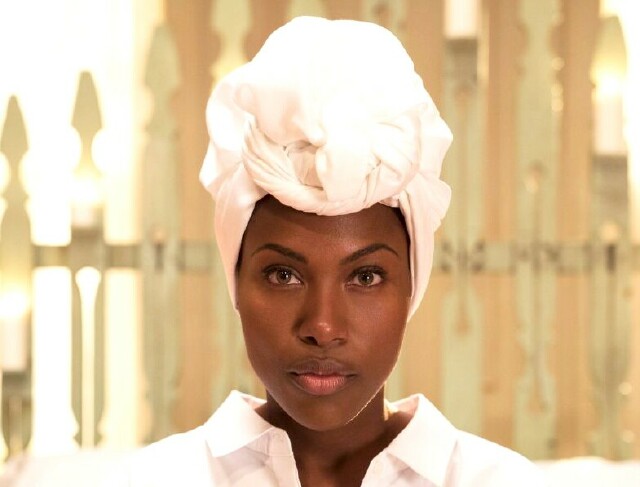 Wikipedia says, “She's Gotta Have It is a 1986 American comedy-drama film written, edited and directed by Spike Lee.  Filmed on a small budget and Lee's first feature-length film, it earned positive reviews and launched Lee's career.”  I had to look to Wikipedia for answers initially because, like many others in my generation, I had simply never gotten around to seeing this classic Spike Lee Joint.  Now, Lee has reincarnated his original vision into a Netflix series, and from what I’ve seen so far it’s clear that even those not as familiar with the ebbs and flows of Spike’s signature style will be hard pressed to not love it.  That probably has something to do with Lee’s love for Brooklyn that’s so strong it seems to seep through every establishing shot.  Or maybe it’s just got everything to do with #NolaDarling.

Nola Darling, played by the amazing DeWanda Wise (Underground, Shots Fired), is the strong female lead of the series.  (Wise is pictured above.)  Maybe I should say she’s the strong female lead in her life.  Nola is a talented artist with a dope apartment in expensive gentrified Brooklyn, and everyone around her can’t help but be the supporting cast of her existence.  Besides being an attractive, opinionated and intelligent thirty-something, she’s also as woke as she is desired.  She would like us to know that, “the only reason I’m doing this is ‘cause folks think they know me. They think they know what I’m about, and the truth is, they don’t know me.”

Speaking of desired, the men in Nola’s life are slightly less three-dimensional. First up is Jamie Overstreet (Lyriq Bent).  He’s the businessman and supposed romantic in Nola’s life.  Sure, he seems pretty stable, but then again, “being stable” is exactly as exciting as it sounds.  Greer Childs (Cleo Anthony) is the narcissistic pretty boy.  He fancies himself a maverick in the bedroom, and just like any real-life douche he actually utters the words “Adonis-like” in reference to himself, proving that Greer loves Greer more than Greer’s mom probably does.

Then there is the iconic role of Mars Blackmon (Anthony Ramos), which was originally played by the man himself, Mr. Spike Lee.  Mars -- a Latino in this iteration -- reminds me of dudes I went to high school with; a trait that when coupled with the overall blackness of the series was a pretty comfort-creating combo for me.  To top it all off he’s funny, colorful in more ways than one and has manic energy to him that’s both truthful and endearing.

Entertaining as these dudes may be, the three of them still lack the depth that Nola and her best friend Clorinda (Margot Bingham) share.  Clorinda used to be Nola’s roommate but, as the series loves to depict, Nola likes to get down.  All that random guy traffic made Clorinda uncomfortable, and in a flaw-exposing moment Nola did the less considerate thing and reminded her then-roommate where the door was.

The point being made -- specifically doubled down on in the first episode -- is that Nola’s not a freak, or lonely, or a ho.  She’s an adult, and just like any man, she has the right to have sex with whom she chooses, when she chooses to, without having to worry about taking on any labels or being considered anyone’s property.  She’s not inherently selfless, either.  In fact, she may even be a little entitled, but that’s okay, because we have come to expect our protagonists to share the same humanizing flaws we all do.

In what feels like a very self-aware way, She’s Gotta Have It shares the now-familiar modern-day female spirit of shows like HBO’s Insecure while utilizing a visual style similar to shows like Netflix’s Dear White People.  She’s Gotta Have It lives for that hi-res close-up, and for good reason, ‘cause it definitely gets the job done.  The dialogue is pointed, clever and sprinkled with comedy.  The relationship between Mars and Nola is the most genuine and will probably grow to be a huge draw, if not the driving force of the series as it progresses.

I will say that, putting all the love life stuff aside, as the first episode moved along I started to wonder where the series’ real conflict would come from, but quickly received my answer in the form of a short but intense unwanted interaction between a stranger and Nola on her way home from Clorinda’s house at night.

As if the rest of the episode wasn’t enough, Nola’s encounter with the African American stranger who catcalled her, grabbed her by the wrists and then proceeded to call her a “black bitch” when she fought him off was an unpleasant but needed reminder that the world is an extremely different place for women.  As a man, I probably would’ve had to worry about being robbed or beat up, maybe even killed.  Nola had those concerns, too -- on top of probably thinking she would be raped first.

With episode titles like “#Booty Full (Self Acceptance)” and “#4 My Negus & My Bishes (All Words Matter),” She’s Gotta Have It is more than just a sexy narrative sprinkled with modern-day social issues.  It’s an entertaining episodic look at themes of sexual and social equality that were apparently relevant in 1986 and are just as a relevant today.  It’s also an ode to the ever-changing, ever-constant beauty of Brooklyn.