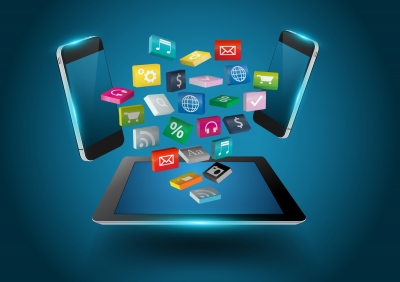 I didn’t go to the Consumer Electronics Show, or CES. In fact I’ve never been. It’s not that I don’t like looking at new shiny things as much as the next man, it’s just that I have never found these huge events particularly useful. But it’s fun to read about the shiny things – almost as much fun as reading the assembled advertising throng’s tweets, posts and blogs justifying the trip by stressing just how crucial this stuff is for them professionally. When we all know that really they just want to stare and point at the new shiny things like the rest of us.

But, having pretensions as I do to being a media professional I read a lot about these events. And one particular image caught my eye.

It was a photograph of the assembled hacks covering one of the big showcased set pieces. It might well have been Michael Bay’s brilliantly incompetent performance as a spokesman for Samsung or the bit about the app that tells your computer how well you’ve brushed your teeth. Or the toaster that talks to the car. Something like that.

The interesting thing about the photograph was that all those in shot were using laptops. Not a tablet to be seen. They weren’t even all using Macs; there was a sprinkling of HPs and Dells there too. What is the matter with these people, don’t they know that laptops are dead; that tablets rule the world; and that even those poor deluded fools who still want a laptop have to use a Mac? How do we know this? Because geeky journalists tell us, that’s how.

So what is going on? An outbreak of practicality, that’s what. My older daughter is a journalist, in her 20’s. Over the holidays we got to talking about Macs and iPads. She wanted and indeed got a Mac simply because she finds it far easier to type and work on a keyboard. This does not mean she hates iPads – she would no doubt like one of those, too – it’s just that in her view the best tool for her professionally is a laptop.

Today’s media is full of people expressing the opinion in print, or on screen (they’re published so they must be worthy of being read, surely) that we live in a black and white world. If you like tablets you will never go back to a laptop. If you can’t get along with Google Glass within a couple of weeks the whole wearables business is bound to fail. (In fact one of the more laughable comments I saw on Glass was that they are bound to fail because Chinese counterfeiters are not busy ripping them off.) The sector’s finished even before it started.

The fact is we don’t live in a black and white world. Social media succeeding does not mean that TV is dead (despite Eric Schmidt). Online newspapers racking up readerships in the gazillions doesn’t mean that there is no place for printed versions. DAB radio via a radio seems to be quite happy co-existing with online radio. Cinema (that was dead years ago, when VCRs came along, as you might remember) thrives, as do film subscription services.

We all use what devices or channels we find useful, for different tasks. Some of us are early adopters, and early discarders; some of us wait, watch, try, adopt.

It’s become a cliché to say that consumers’ attention spans are shortening, but it seems that our professional attention spans are shortening too. The fact that the CES happens every year doesn’t mean that some transformational technology will appear every year. This year it seems was all about bigger, curvier TV’s (TV’s? How quaintly old-fashioned) and apps that turned household appliances into smart machines (smart fridges? A bit passé surely?). As Decipher’s Nigel Walley pointed out in a piece on Mediatel, “Yes, you showed us the demo last year. Can you hurry up and launch the bloody things.”

Years ago I learned a valuable lesson from someone senior at Philips. “We turned the company around,”he told me, “when we worked out that inventing stuff in the hope that someone might want it was far less efficient than finding out what people want and then inventing it.” And making it shiny and bright, obviously.