Smackdown at the Oscars: Will Smith Claps Back 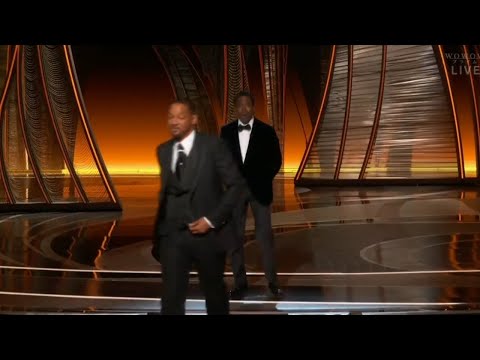 Will Smith made quite the statement at the Oscars last night, and believe me, nothing was left to interpretation. While preparing to announce the Oscar for Best Documentary Feature, Chris Rock made a joke about Jada Pinkett Smith appearing in G.I. Jane 2 because of her shaved head. Even though Smith appeared to laugh, both he and Jada found it disrespectful. Not a moment later, Will Smith was on stage in front of Rock -- and the world -- where he open-hand slapped the renowned comedian. That was followed by Rock going, "Oh wow! Will Smith just smacked the shit out of me!" Now obviously, this is beyond a big deal. These are important guys, and there are many levels to this shit. So, let's really break down the ins, outs and impact of what Rock himself called "the greatest night in the history of television." This wasn't the first Smith Smackdown (see video below).

First, some basics. Will Smith was at the Oscars in the first place because he had been nominated for his work in the film King Richard, where he played the father of Venus and Serena Williams. He was sitting next to his wife, Jada Pinkett Smith, who admitted in an Instagram post last year to suffering from alopecia -- a medical condition that causes hair loss. In that post she said, "Now at this point, I can only laugh … y'all know I've been struggling with alopecia. Just all of a sudden, one day … it just showed up like that. Now, this is going to be a little bit more difficult for me to hide. So, I thought I'd just share it so y'all not asking any questions." She then went on to say, "Mama's gonna have to take it down to the scalp so nobody thinks she got brain surgery or something. Me and this alopecia are going to be friends … period!"

So, given that information it's easy to see how Smith would find it a bit off color for Rock to say, "Jada, I love you. G.I. Jane 2 -- can't wait to see it." Smith apparently felt so strongly about how that comment disrespected his wife that he decided to smack Chris Rock. In the face. On live TV. At the OSCARS. I mean… Jesus.

Maybe Smith really is feeling all this pressure and made a rash decision last night. Maybe this isn't the first time he's heard people talking crazy about Jada, and he's had enough, and that joke was the straw that broke the camel's back. Or maybe, every once in a while, if one just does or says the right combination of things to Will Smith they end up finding out exactly how on the table a slap to the face really is. Let's not forget the pushy Ukranian reporter Smith backhand slapped in the face while promoting Men In Black 3 back in 2012.

Immediately following said slap, Smith promptly returned to his seat where he yelled very clearly, "Keep my wife's name out of your fucking mouth!" By this point, it had become painfully clear that this wasn't a bit planned by the two for laughs, but an all-around regrettable altercation.

I personally have mixed feelings about the matter. First of all, I will agree that Chris Rock's comment about Jada, especially given his probable knowledge of her condition, was definitely in poor taste. Now, have worse things been said? Absolutely. However, Rock is a comedian, and part of his or any comedian's job is to make the occasional joke at somebody's expense. Last night, it just happened to be Jada. Again, the nature of Rock's joke wasn't the coolest, but the man has the right to freedom of speech just like the rest of us.

Secondly, I do understand Will's impulse to defend the honor of the woman who is both his wife and the mother of his children. I've met very few people in life who would stand for such a thing, regardless of their status, so I get it. That said, nothing anybody says makes it okay to land a hand on them, even if what they said makes you feel like doing just that. That's why kids who fight in school get detention and calls to their parents while adults go to jail for doing the same -- because the adults are supposed to know better!

Will, after winning the Oscar for King Richard, said in his acceptance speech, "Richard Williams was a fierce defender of his family. In this time in my life, in this moment, I am overwhelmed by what God is calling on me to do and be in this world." At this point he began tearing up as he likened himself to Williams, and declared his own urge to protect his family, the Williams family, and the actresses who played Venus and Serena. He went on to say, "I know to do what we do you gotta be able to take abuse, you gotta be able to have people talk crazy about you. In this business you gotta be able to have people disrespecting you and you gotta smile and pretend like that's okay."

I think my biggest issue with this whole thing is the optics of it all. Chris Rock and Will Smith are two of the biggest, most well-known and successful Black celebrities in the world. Sure, they're both just people at the end of the day, but when you represent and have influence upon the culture in the way that they do, a modicum of responsibility has to come with it. There's a reason why Black people back in the day were so adamant about not "showing out in front of white folks" -- because even when in discord we should still put up a united front -- especially in public. I don't know in what exact way this will affect people of color, or the actors themselves, but I think we can all agree that it probably wasn't the best way to go.

I believe that Smith agrees. I don't know if he regrets what happened, but he acknowledged the foolishness of it all, at least indirectly, by repeating something Denzel Washington said to him during the break in reference to the incident. He said, "In your highest moment, that's when the devil comes for you."

Diddy, who was the next presenter after Rock, also rallied for a solution, saying, "Will and Chris, we're gonna solve that like family at the Gold Party. Right now we're moving on with love." I hope that that can actually be the case.