Smell of Success with Spring Cinema 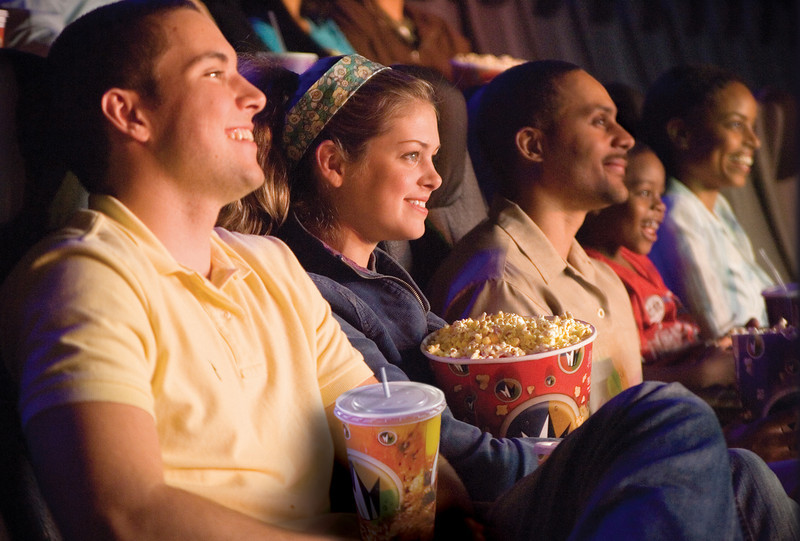 Ahhh, spring is in the air. The snow is melting, the sun is shining and windows are open to the smell of fresh cut grass that says spring training and baseball season are here. Nothing says spring like opening day and … great baseball ratings, especially with the Mets still tied for first place!

Ahhh, spring is in the air -- like a hoop shot in the NBA playoffs ... because nothing says spring like Steph, Klay and Kevin racking up wins and …big ratings!

Ahhh, spring is in the air -- so it's time for NHL players to ditch their razors, sport a beard and play some bang-up playoff hockey ... winning in the ratings, especially with Millennials!

Spring is when some incredible sports programming is available for brands to chase engaged viewers, Millennial viewers, indeed all sports-loving viewers with exciting, live-event programming.

So, where can a buyer hungry for rating points find the best live and event-based GRPs in the spring?  Gotta be sports, right?  Wrong!  It's at the local megaplex!  The biggest and best programming and ratings are at the movies. C'mon, everybody knows that movie-going is only popular in the summer or around the holidays, right?  But in the spring? True!

Given the fractionalized, on-demand audience that pervades the entire media landscape, these are still pretty good numbers for live event TV programming.  But how did the movie slate deliver against the A18-49 demo last 2nd Quarter? Between NCM and the second-largest cinema network combined, the movies delivered no less than a 13.2 A18-49 rating every week between April and June of 2016 -- and we are projecting a 5% rating increase in 2017.

Topping it off, Beauty and the Beast's opening weekend performance came in as the highest-grossing March release in motion picture history at $174MM+ which translates into roughly a little more than 20 million impressions, contributing to the biggest March in history at the box office!

The remaining slate of 2017 films this spring are also expected to clean up. Take a look: 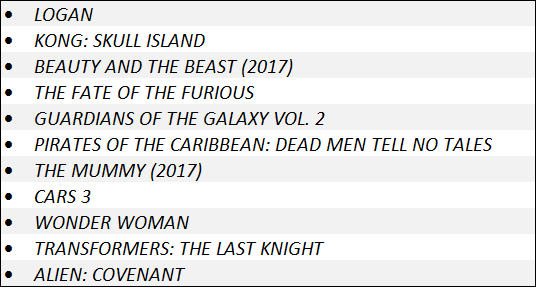 We're projecting the cinema medium to deliver an average A18-49 weekly rating of 13.8 this spring, with NCM delivering an 8.7. 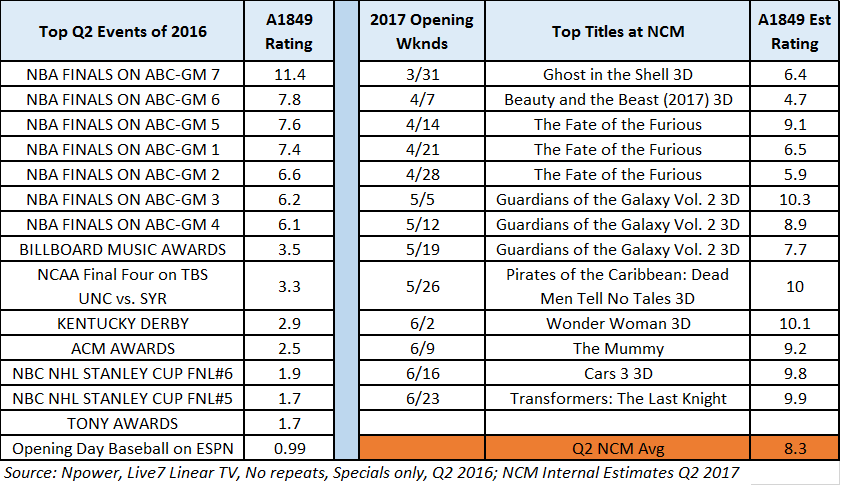 As the cinema medium has achieved ratings on par with or beyond other "event programming" mediums like TV, brands can use the glitz, the glamour and the high impact of this engaging, captive premium video medium year-round to help achieve their GRP goals.