Snapchat's Millennials Are the Most Outwardly Expressive 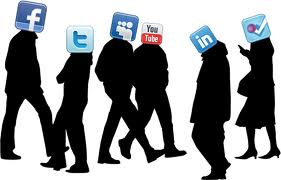 Social media are seemingly being increasingly accused of fostering social isolation.  One example epitomizes this by asserting social platforms enhance a "feeling of isolation as we begin to miss the warmth of a smile, or the joy of a hug and good conversation.  We become, in a sense, alone in the crowd."  Yet few, if any, of these critics actually probe beyond the topline conclusions to see if some social platforms are distinctly better than others at bucking this phenomenon.  In fact, there is clear evidence that some of digital entities appeal to more expressive, outwardly-going and altruistic people than others.

To help understand the psychographic appeal of social media, we turned to our survey, UM's Media in Mind, to probe this further.  Clear differences are quite apparent in the appeal of social websites among more outgoing and expressive Millennials, defined here as 20-39 year olds: 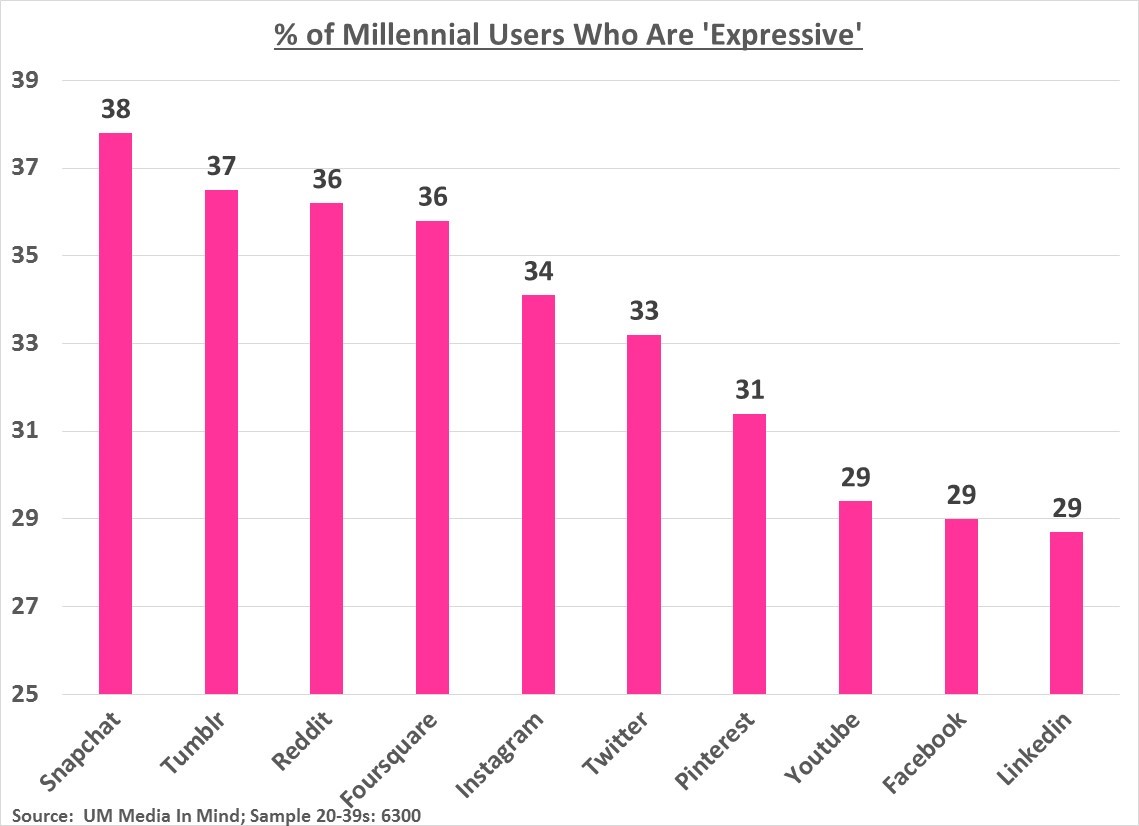 To build our definition of "expressive" individuals, we probed the 700 psychographic statements on Media in Mind to identify more outgoing respondents.  To qualify in this segment, respondents had to "agree a lot" with three or more of 10 appropriate psychographic statements.  Four examples of these attitudinal metrics include: "I'm expressive when sharing opinions," "I enjoy keeping in touch with friends," "I have a genuine interest in people" and "People say my enthusiasm is contagious."

In creating our "expressive" proxy, we didn't just focus on one simple statement such as "I'm expressive when sharing my opinions," because a single attitudinal statement in isolation can be misleading.  Humans are full of paradoxes.  For instance, there are 35 million adults in the U.S. who admit to both smoking cigarettes and, equally, following a regular exercise regimen to stay fit and healthy!

If Snapchat performs so well, how does it compare on some of these key psychographics versus its frequently quoted competitor, Instagram?  Here are three distinctive criteria included in the 10 variables we examined:

While there seems to be a marginal lead by Snapchat Millennials to be more upbeat about life, the differences are quite close on these and other attitudinal variables we examined.  In reality, the similarities are possibly greater than the differences.  This underscores the competitive pressure on Snapchat by Instagram's parent, Facebook.

Of all the social media attracting criticism, Instagram's owner, Facebook, arguably attracts the most acerbic.  The Economist recently noted how the company was increasingly seen as the technology equivalent of Big Tobacco.  The article went on to list the burgeoning issues Facebook faces on a wide number of fronts, including executive retention and advertiser trust.  On a completely different level, for some pop psychologists Facebook is accused of making us sad.  Time will tell if the former issues might result in a wider set of repercussions for Facebook, but is the latter criticism actually borne out by consumer attitudes?

Comparing Millennials who are Facebook heavier users, defined as 16+ times a month, with Facebook non-users doesn't readily accord with the idea that using Facebook implicitly makes us sad.  Here are three key psychographics related to personal well-being:

Of these three criteria, there is little to indicate at all that being a heavy user of Facebook would, by itself, make us sad.  If anything, not having Facebook is more likely to be an indicator that a young adult may be unhappy with the world.

While Snapchat has carved out a niche for itself in the type of outgoing individuals it attracts, the pressure from Instagram seems ever present.  The end game of this competitive tussle may depend more on how Instagram's owner, Facebook, navigates the choppy political and social pressures it now faces.  Some of these issues may turn out to be apocryphal, while others look increasingly real.