Soap Opera Update: “General Hospital,” “Bold and the Beautiful,” “Days of Our Lives,” “Young and the Restless” – Ed Martin 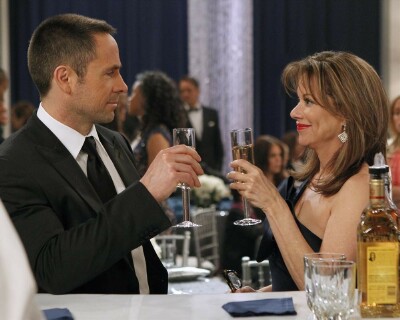 Anyone who thinks daytime dramas are on a down-slide, simply because only four of them remain, simply hasn’t been paying attention of late. ABC’s “General Hospital” and CBS’ “The Young and the Restless” and “The Bold and the Beautiful” have been in fine form, each one as engrossing in its own crazy way as anything else on broadcast television. And while NBC’s “Days of Our Lives” is currently in a bit of a slump, it may simply be catching its breath after one of its best years in years.

More than three decades after it was famously cited as TV’s Hottest Show by Newsweek, “General Hospital” remains a marvel of modern soap opera, now nearing the end of a second consecutive year of breakneck storytelling that has given great material to everyone in its primary cast (including a host of new characters that have come on board during the last 24 months) while bringing back and revitalizing at least a dozen others from the Seventies, Eighties and Nineties and giving them plenty to do, too. Not all of the stories are to every viewer’s taste, but how could they be?

For my part I could have done without the murder this year of legacy character A.J. Quartermaine by Sonny Corinthos, a mobster who had tormented A.J. since the Nineties. A.J.’s birth in 1979 was a major plot point in one of the show’s all-time best stories (the affair between Monica Quartermaine and Rick Webber that turned Monica’s husband Alan into a would-be murderer) and should have grown up to become a focal character on the show (running the global conglomerate ELQ and following in his parents’ adulterous footsteps). But – and this is important – his murder has tipped much of the “GH” narrative on its side, landing Sonny in jail and prompting A.J.’s son Michael, who was raised by Sonny and always loved him as a father, to break all ties with Sonny and Carly (Michael’s mom) and accept his true heritage as a Quartermaine. Viewers have waited many years for Sonny to lose everything. It was almost worth losing A.J. to make that happen.

Everything else about “GH” – for my money the best soap on television right now – has been on fire, much of it due to the returns of a host of colorful supervillains from the show’s past. Many of them are fascinatingly tied to a relatively new character, mad doctor Liesl Obrecht, played to striking perfection by Kathleen Gati, who consistently makes the over-the-top doc funny and frightening without allowing her performance to degenerate into ridiculous camp. As far as I’m concerned, in the fertile arena of daytime drama Gati (pictured below left with co-star Donna Mills) has delivered the performance of the year. 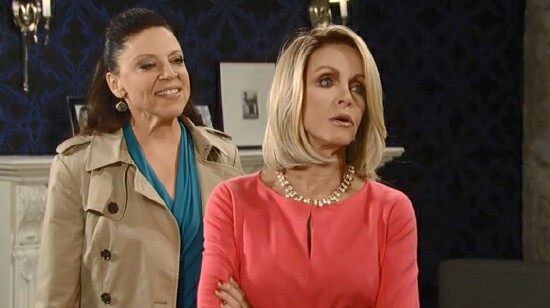 And how about Nancy Lee Grahn as power attorney Alexis Davis and William deVry as semi-reformed mobster Julian Jerome? Without question they have been the soap opera super-couple of the year. (They are known online as “Julexis.”) What makes their work together so extraordinary and their chemistry so profound is the fact that Grahn and deVry aren’t kids, as most super couples, especially the sexually combustible ones, tend to be. They are both accomplished soap opera veterans with decades of work behind them. Grahn (a two-time Emmy winner) and deVry make Alexis and Julian more complex and captivating than any other couple in daytime or primetime – and way sexier, too.

I could fill three columns praising other performers and stories on “General Hospital,” but in the interest of brevity I’ll also single out Jane Elliott, Robin Mattson and Lynn Herring, who still make hot-tempered Tracy Quartermaine, homicidal Heather Webber and mercurial opportunist Lucy Coe, respectively, as much fun as they were in the Seventies and Eighties; newcomers Maura West and Michelle Stafford as psycho-mobster Ava Jerome and crazed baby-snatcher Nina Clay; Donna Mills as Nina’s icy mother Madeline, and three of the younger cast members who more than hold their own around these fantastic veterans – Chad Duell as Michael Corinthos, Bryan Craig as his brother Morgan and Kelly Thiebaud as Britt Westbourne, the manipulative and manipulated spawn of Liesl Obrecht and lunatic monster Caesar Faison.

How thrilling it has been to see a soap opera that just celebrated its 50th anniversary move into the modern era while embracing its phenomenal past.

Meanwhile, the two CBS soaps are cooking with gusto. “Young and the Restless” is currently doing something no soap opera has accomplished since “Bold and the Beautiful” brilliantly explored the crisis of homelessness in America – tackling a contemporary issue in great depth by telling the story of one man’s terrifying battle with prostate cancer and the impact it is having on the people he loves. Christian LeBlanc, as Michael Baldwin, who is facing the fight of his life, and Greg Rikaart as his fragile younger brother Kevin are crushing it, as the kids like to say. Then again, these two always show their peers how it’s done whenever they are handed amazing material. It is no accident that they have four Emmys between them for their work in these roles.

The exquisitely produced and always distinctive “Bold and the Beautiful,” which has included the beloved Bob Barker and many “Big Brother” alumni among its guest stars this year, is ending 2014 with a story we have seen dozens of times before and somehow making it feel like something fresh and new – the miscarriage of Hope and Wyatt’s baby, which came about after a nasty spat between Hope and her monster-in-law Quinn (the fabulous Rena Sofer) that ended with Hope taking a tumble down a spectacular outdoor staircase seemingly built for just such accidents in the back of a sprawling Beverly Hills mansion. This event impacts almost every character on the show, and everyone in the cast is making the most of such high-octane material, especially Emmy winners Scott Clifton and Darin Brooks as battling half-brothers Liam and Wyatt.

As noted at the top, “Days of Our Lives” is in something of a slump right now – one that hopefully won’t last too long. But that dip is coming at the end of a compulsively watchable year that built up to the powerful departures of longtime cast members Alison Sweeney -- Emmy worthy right to the end for her portrayal of emotionally kinetic firecracker Sami Brady -- and James Scott (as sexy and sinister villain turned quasi-hero E.J. DiMera). “Days” in 2014 also featured a soap opera milestone: The wedding of Will and Sonny, the gay couple that has been at the center of much of the drama on this show for at least two years. True to form there is already trouble on the horizon: Sonny has recently been reacquainted with a past lover who happens to be a closeted professional athlete. If nothing else, the writers and producers of this show deserve credit for treating their gay characters as equal in every way to everyone else on its canvas. Then again, the creators of daytime drama have never been afraid to tackle relevant issues and move the medium forward.