Even though Social TV is barely three years old as a major consumer phenomenon, it is speeding towards its coming of age. The impending launch of Social TV ratings at the end of this month will not only prove if the concept can pass muster, it also has the potential to upend the TV airtime trading market as we know it. Yet how many advertisers have considered the possible new opportunities it offers, as well as the upheaval that may hit us in the months afterwards?

Even though Social TV is barely three years old as a major consumer phenomenon, it is speeding towards its coming of age. The impending launch of Social TV ratings at the end of this month will not only prove if the concept can pass muster, it also has the potential to upend the TV airtime trading market as we know it. Yet how many advertisers have considered the possible new opportunities it offers, as well as the upheaval that may hit us in the months afterwards?

Social TV is transforming TV from something we watch to something we do. The potential value of social TV data is that it can enable an advertiser to turn audience energy into brand momentum. Critically, this potential varies massively by advertiser category.

Similarities and Contradictions in Social and Audience Data

In my last blog , I highlighted why Nielsen Twitter TV Ratings (NTTR) might not behave in a similar way to conventional TV ratings. These ratings characteristics are worth probing further. The patterns which emerge in social TV data exhibit both similarities and contradictions to conventional Nielsen ratings.

Twitter has a monthly reach of 18+ adults of about 18%. For 18-24s, this increases to 27%.Armed with the information that Twitter's monthly audience is only a small fraction of TV's monthly audience, we might possibly conclude there is little correlation in the audiences between the two. But we'd be wrong.

For example, here is one week from mid-August where I've compared the 18-49 weekly TV impressions of 20 large TV networks, including the Big 4, to their corresponding Twitter activity. By building a multiple regression analysis based solely on the data provided by Nielsen's Social Guide, the data source that will fuel social TV ratings, the correlation (R) between predicted weekly impressions to and actual impressions is probably higher than one might expect at 65%: 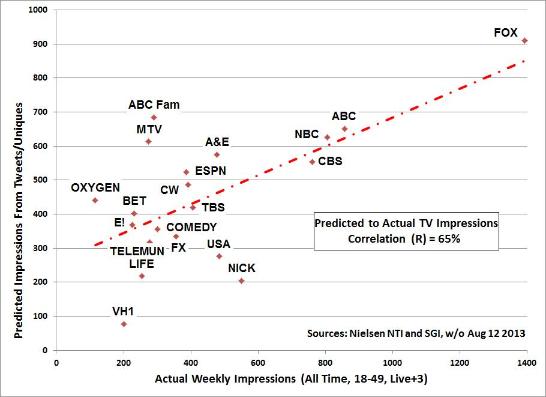 Contrary to the above analysis, if I had just analyzed individual prime time shows, the correlation with Twitter's activity data would have fallen to about half this level. Why?

One of the reasons for the fall in the alignment of the two data sources at the program level is that social TV activity varies by program genre. As the Council for Research Excellence has shown, social TV activity while watching TV is highest for sci-fi, sports and reality, and lowest for drama, comedy and children's shows. Since TV stations often have a variety of program genres, the genre differences partly balance themselves out, and consequently we end up with a closer correlation when we look at overall station audience patterns.

Rather than this lack of alignment at the program level being an issue, I contend it signals an opportunity for marketers interested in harnessing social TV. If the fit were perfect, there would be little reason to consider embracing social TV data because it would not provide a worthwhile point of difference to conventional TV audience information.

So how should advertisers tap social TV in their communications strategies? At the Word of Mouth Marketing Association Summit in 2010, I presented a framework for evaluating the word of mouth marketing opportunity by advertiser category which I coined the WOM Opportunity Grid. Based on conversation data from the leading word of mouth researcher, Keller Fay, I was able to define a clear relationship between total WOM volume and WOM influencers by advertiser category. For example, looking at the top and bottom three categories, these were:

This ranking does NOT mean that a bank has few WOM opportunities, but it does mean that it may have to specially create and target them. Equally, for those advertisers in areas such as movies or lingerie, it indicates it is often much easier to devise WOM strategies that more easily gain traction with the US population at large.

There are two main implications for advertisers interested in leveraging social TV to develop their brand momentum:

1. Clearly define which genres of TV program best suit the brand's campaign. Ideally, include some form of activation in those shows such as product integrations, sponsorships, or even just simple ad pod billboards.

2. Carefully consider the brand's category: Does the brand have to reach out to active Twitter and other social media influencers in unique and different ways? If you are a brand with a possibly lower immediate WOM potential, do something unexpected or outside the brand's comfort zone.

Ultimately, social TV is not just an additional quality control for a conventional TV ad buy, but a potential pathway to unlock the audience's energy for the brand. If you would like to see more on the WOM Opportunity Grid please visit myJack Myers' blog that I wrote at the time, or email me at graeme.hutton@umww.com for a copy of the complete WOMMA presentation.

Graeme Hutton is SVP, Group Partner, Research at UM. Graeme came from the UK to the US in the late 90s, and his only regret is that he did not do it sooner! Graeme joined UM in 2006. At UM, he has

engineered and activated a broad-based set of integrated communications and consumer insight tools which dovetail in to the agency’s burgeoning arsenal of media research products and systems. His key clients include Sony Pictures Entertainment and Sony Electronics. Graeme can be reached at Graeme.hutton@umww.com