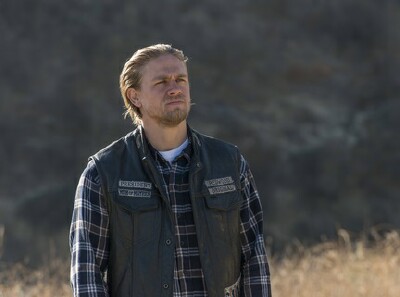 Has there ever been a drama on advertiser-supported television as unrelentingly violent as FX’s “Sons of Anarchy?” The brutality on this show can be breathtaking. Not that I have a problem with that. What would be the point? The war against television violence was lost long ago. The television industry, like the movie business before it, has finally loosened up and given the public what it wants. Who am I to stand in the way of such progress?

I think “Sons” surpasses even AMC’s ultra-violent “The Walking Dead” in terms of perpetual brutality with its frequent slayings of primary and recurring characters and its messy mass-murders. (On “TWD,” most of the victims of the harshest killings are already dead.) Especially in this, its final season, “Sons” has presented the brutal, bloody butchering of several gangs or groups of people unwise and/or unfortunate enough to engage with criminals in and around the fictional town of Charming. Even a brothel filled with sweet sex-workers and their customers was the scene of one such slaughter.

When it comes to such stuff on “Sons,” too much is never enough: It always goes to places other shows fear to tread. Consider the nerve-frying murder at the end of last season of Dr. Tara Knowles-Teller, a smart woman who made so many stupid choices in her life that she ended up on the receiving end of a meat fork wielded by her psychotic mother-in-law Gemma, a television character loathed almost as intensely by viewers as sinister King Joffrey during his brief reign of terror on HBO’s “Game of Thrones.” (“Thrones,” of course, is just one of many exquisitely produced adult dramas on premium cable that have contributed to the giddy bloodlust of the television audience overall.)

“Sons” feels more violent through and through largely because viewers are made to care for certain characters, no matter how detestable they may be -- and let’s face it, at this point almost everyone on this show deserves to die. Tara was one of the few exceptions. Nobody wanted to see her life come to an end; she was the good person amid the dangerous, emotionally stunted, often blood-thirsty people she had come to accept as family and friends and the only character with whom the viewer could easily identify. And then she was gone.

I was so turned off by that sequence (which also included the murder of Charming’s police chief, a heroic figure who had already suffered terrible losses while trying to stop the madness around him) that I gave serious thought to not watching the final season of “Sons.” I was actually offended by what happened to Tara -- and that it was presented in a manner meant to entertain me in some way.

I now acknowledge my response as a tribute to the power of the storytelling on “Sons,” a show that defied me to stop watching it and then drew me right back in. That’s probably the highest compliment I can pay to series creator and executive producer Kurt Sutter and his creative team, as well as his fantastically fearless cast, members of which never shy away from exposing themselves physically, psychologically and emotionally on screen. The sex montage that opened last week’s episode was all the proof anyone should need of that. 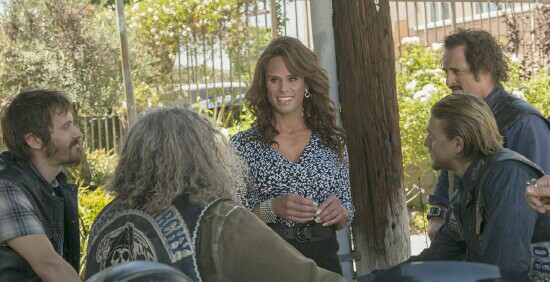 Under Sutter’s skillful, one of a kind direction, “Sons” calls upon its actors to excel in intense scenes the likes of most actors only dream of playing. That keeps the audience on the same edge as the cast, never knowing what will be seen or heard after the next commercial break. For example, who could have imagined that last week’s episode, with all of its graphic sex and grisly violence (including the second eye-gouging and finger chopping of the season) would also include one of the most beautifully written scenes ever produced for television between two adults explaining their deep feelings for each other? I’m talking about the one in which bad-ass biker Tig (Kim Coates) and tender transgender Venus (Walton Goggins) fully revealed themselves to each other -- in the psychological sense. The dialogue was deeply moving; the performances by Coates and Goggins similarly profound. It was in every way a sublime showcase for two acting partners – one of the best I have seen since watching Colin Firth and Geoffrey Rush take each other through sequences of great vulnerability in “The Kings’ Speech.” (Firth won as Oscar for that. Goggins had better be honored with an Emmy for this, or the Academy of Television Arts & Sciences is going to have some explaining to do.)

“Sons” worked this same magic again last night when doomed screw-up Juice (Theo Rossi) finally told gang-leader Jax (Charlie Hunnam, another essential Emmy nominee this season) the truth about Tara’s murder. The way this scene was shot it looked as though the two men could see right through each other. Even in this Golden Age of television drama moments like these are not as common as one might think – and they certainly aren’t expected in a violent soap opera about criminals.