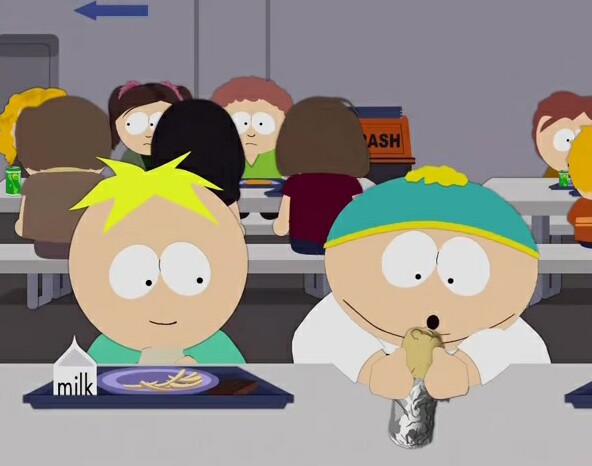 These days anybody with a digital device can be a critic. That’s not necessarily a good thing – as last week’s episode of Comedy Central’s venerable animated comedy “South Park” made chillingly clear.

In the episode, titled “You’re Not Yelping,” the owners and operators of the title town’s many restaurants were terrorized by a growing number of patrons who identified themselves as “food critics” and made continuous demands of them. The best tables. Brighter lighting. Free desserts. Unlimited fawning and fussing, in their restaurants and other places, too.

In reality the demanding ones weren’t professional critics at all. They were simply people with smartphones, most of them brimming with smug self-assurance, all of them greedy and selfish, and each one powered by Yelp, the app that allows just about everyone to comment on and rate just about anything but is especially identified as the place to go to check out eating establishments. (Just this past weekend my friends and I relied on Yelp to choose a lunch spot during a visit to Storrs, Conn. We hit on a winner: The Dog Lane Café.)

Identified as Yelpers, the power-mad citizens of South Park slowly expanded their reign of terror, threatening restaurant owners with utter ruination in the form of low Yelp scores if they didn’t comply with their every request. There were hundreds of them – each one convinced that everyone else in town was hanging on every word they uttered and every rating they posted.

Of course, demon seed Cartman arrogantly seized the opportunity to identify himself as a food critic and proved to be the most egotistical Yelper of them all, making one of his schoolmates – the son of an immigrant couple who were among the small restaurant owners struggling against the onslaught of the Yelpers – do his terrible bidding at every turn. (For once the pressure was off Cartman’s put-upon pals, notably the humble bumbler Butters.) 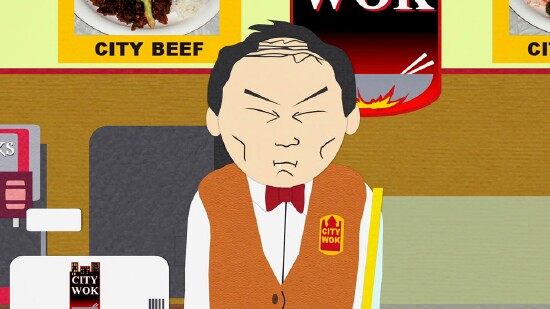 Eventually the restaurant owners – including Tuong Lu Kim (above), the long-time, long-suffering owner of City Wok -- banded together and banned the Yelpers from their establishments – but the Yelpers proved too mighty to ignore. Faced with plunging profits, the bullied businesspeople reluctantly agreed to allow the Yelpers back in, all the while plotting sinister revenge against them which I will not spoil here except to say that it involved many different bodily secretions, seen in a tuneful montage at the end that likely left viewers singing a new NSFW song. (You can hear it in the video below, but again ... this is not something to play in the office or watch with your kids. You have been warned.)

As a long-time television critic who has witnessed the collateral damage done by the surging tide of bloggers and episode re-cappers infiltrating what had once been the territory of professional journalists who had proven themselves and earned their positions, I couldn’t help but relate to what I was watching. Once upon a time in all areas of criticism -- from television to books to food to government policy – education, context, life experience and long-term commitment were essential. Those are still important attributes in some media, but criticism as an art form has been egregiously compromised, a subtext to the shenanigans in that “South Park” episode.

But I don’t think that’s what “South Park” geniuses Trey Parker and Matt Stone were getting at. (They’ve been producing their show for a remarkable 19 seasons and remain as timely, provocative and thought provoking as ever, perhaps more than anyone else working in television.) Rather, I believe they were commenting (as they generally do) on the impact of citizen journalists/critics/reporters on society in general. Nobody in their story was benefitting from the output of the Yelpers (as evident by the title of the episode) except for the Yelpers themselves, who had figured out a way to utilize digital technology for their own self-focused benefit. That’s not uncommon behavior these days -- even when it comes to hooking up, according to this recent article in Vanity Fair.

This is a good time to mention that some television networks and movie distributors are as guilty as anyone else of shifting power from the responsible few to the reactive many. Just note the many advertisements they run in which they quote random tweeters (who, for all we know, could be family and friends of the project’s producers and stars) rather than select professionals whose job it is to know what they are talking about and keep everything in knowledgeable context.

There ought to be room for everything; a balance between the old and the new – and that includes helpful criticism in all forms. (Like I noted above, I owe last Saturday’s great lunch largely to Yelpers.) But criticism as a crowd-sourced force? I don’t think so.