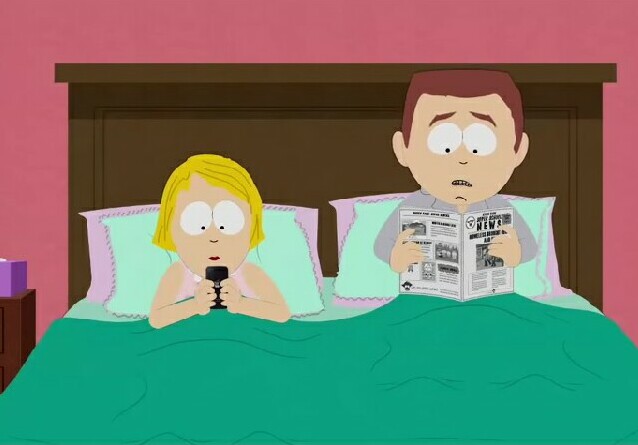 Will advertising destroy us all? Not if the denizens of “South Park” destroy it first. That may happen in tonight’s episode, which seems poised to bring to an end several season-long storylines that are tied together through the power of advertising and marketing. They include the ramifications of the creation of an upscale neighborhood in the title town, the arrival of the town’s first Whole Foods, the replacement at South Park Elementary of long-standing Principal Victoria by the hyper-aggressive PC Principal, the infestation of the Yelpers and a covert plot by middle-age men in suits to either manage or exploit the terrifying influence of advertisements, commercials and native content that is sweeping the land. Caitlyn Jenner is a part of it all, too.

This season, the show’s 17th, has been one of its best ever. That’s a remarkable achievement, but I digress ...

In the last original episode (which debuted two weeks ago), the gang’s stuttering, physically challenged classmate Jimmy Valmer – the editor of South Park Super School News, the school’s print paper – is confronted by PC Principal over his use of the word “retarded” to describe the school’s lunch policy. Despite PC’s slow burn, Jimmy asserts that he refuses to censor himself or anyone who contributes to his publication. PC fires back by banning the paper from the school. Jimmy retaliates by delivering it door to door throughout the town – then basks in the glow of success as the popularity of his print product unexpectedly grows by leaps and bounds.

Befuddled Butters’ dad is especially impressed. Lying in bed with his wife, who cannot tear herself away from her phone, he tells her how much he loves reading the paper. The dialogue given this character in this scene by series creators Trey Parker and Matt Stone – scary smart men of unlimited talent and imagination – is priceless and important and annoyingly familiar to us all.

“There are no ads, no sponsored content, no links to click on,” he says of the printed page. “Just news stories about what’s happening. Do you know how long it’s been since I was able to just sit back and read the news?

“I got so used to getting news off the Internet, but I feel like I’m always trying to chase the news somehow,” he continues. “It’s like I’m in a black void trying to reach the news story. But then the next thing I know I’m reading an ad for GEICO. So I click out of that and try to read the news story. But it’s not a news story. It’s a slide show. I’m looking at the worst celebrity plastic surgery jobs ever. So of course I want to see the next slide of plastic surgery gone wrong, so I hit the arrow.

“I try to click out of it but the ad is following me! It’s following me all over the screen! So I click on the close button, but it wasn’t a close button, it was another slide show! And I just want to know what’s happening in the Middle East, but instead I’m looking at the Top 10 Scariest Movies of All Time! And that’s not the arrow for the next slide. It’s another ad!”

Speaking about the paper publication he says with much relief, “This is just news! And I don’t get lost in all the bullshit!” 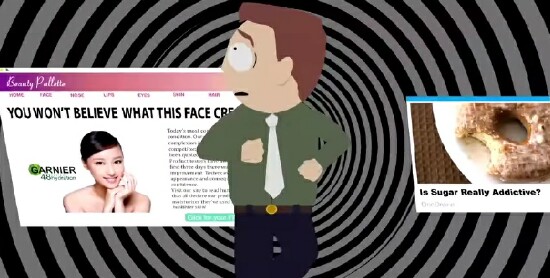 The local television news catches on to the story, interviewing South Park citizens about their newfound love of print news.

“I read the Super School News because it don’t try and fool me and its news reports ain’t paid for by ad companies,” raves one.

“We just feel like this is actual news," says another. "Instead of clicking on links we’re reading stories.”

“I had to get away from the ads,” says Butters’ frantic dad, who is also interviewed. “I felt that the ads were evolving somehow. They started knowing what I liked! What I was afraid of! I tried ad-blockers, but it seemed like every time I tried to block the ads they just got smarter! I’m never going back from Super School News!”

Later, a man who claims to be representing GEICO shows up at Jimmy’s door and offers him $26 million. “We’d love to be in business with you,” he says. “We think the Super School News is a great way to reach new customers.”

“Sorry, Charlie, but I don’t allow ads in my newspaper,” is Jimmy’s cool reply. When the man says GEICO will pay him for simply writing “news stories” about car insurance, Jimmy says, “That’s called sponsored content. I know the difference between news and ads. Do you think I’m stupid? Stick it up your ass.”

The man is miffed. “Do you really think you can stop ads?” he asks, his voice filled with menace.

“You can try to block ads, but they get smarter!” the man asserts. “The more we try to shut them out the more clever they get. There’s a war coming, kid. And I’m going to make sure I’m on the right side of it.”

At that point Officer Barbrady shows up at Jimmy’s door, shoots the imposing mad man and whisks Jimmy off to a research facility filled with men who want to study him because he is one of the few humans left who has the “mental ability” to know the difference between news and advertising.

Advertisements, one of the men explains, are “the new enemy of humanity.” Jimmy is skeptical. “What if I were to tell you that ads have become smarter than us?” the man asks. “And now they are manipulating everything we do?”

“It was our own fault,” the man continues. “Mankind became tired of ads. So we kept inventing ways to make things ad free. We even created ad blockers. That’s when the ads had to adapt. They had to disguise themselves as news in order to survive. If you can tell the difference, then you could be the key to saving our species, Jimmy.”

Jimmy consents to a series of tests and proves that he has the unnatural ability to distinguish and avoid ads. In the process he is horrified to discover that one of his classmates has actually become a living, breathing ad.

By the end of the episode, viewers learned that a pivotal character this season is also a living advertisement.

The episode ended with a small group of resistance fighters (including Caitlyn Jenner) rallying to save South Park from this toxic new influence. Tonight we’ll learn if they succeed or if we are all doomed to a future filled with inescapable ad watching and failed ad-blocking -- or one in which we become ads ourselves.

“South Park” needs to run for another 10 years at the least, if only to offer further comment on changes in the advertising industry in the years to come.