“South Park” Opens a Blistering New Season by Taking on Crowdfunding, the NFL and the “Horrors” of Gluten – Ed Martin 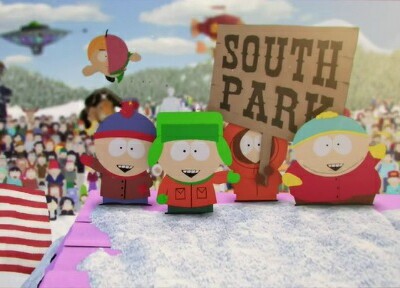 Absent a legal drama from David E. Kelley, it seems the only scripted series on television that aggressively keeps hot button issues front and center is Comedy Central’s miraculous “South Park.” I use the term “miraculous” because this modestly produced little animated series has been cooking with gas for a remarkable 18 years and – as the first two episodes of this, its eighteenth season, have made clear – it shows no sign of slowing down or pulling back as television’s funniest take on current events – and more often than not one of its most insightful.

Series creators, writers and executive producers Trey Parker and Matt Stone are still two of the boldest provocateurs working in television. As ever, they remain stridently unafraid to tell it like it is and expose the ugly truths of our lives, regardless of who or what is in power inside the Beltway or out.

The season 18 premiere, titled “Go Fund Yourself,” managed to deconstruct the sweeping interest in Internet start-up companies, the growing obsession with crowdfunding (especially Kickstarter) and the recent uproar over the NFL-approved use of the name Washington Redskins – with shots at Roger Goodell (revealed to be a malfunctioning robot), Ray Rice, ISIS, all NFL owners and the Catholic Church thrown in for good measure.

The second episode, titled “Gluten Free Ebola,” was more tightly focused with its story of how the sudden inexplicable fear of gluten has gripped the nation. It also called out the gross inefficiency of federal government agencies, in this case the United States Department of Agriculture.

What's coming in this week's show is anyone's guess, but Parker and Stone have set the current bar pretty high. That's the way for a series on a basic cable network to compete during the opening weeks of the "traditional" television season.

In "Gluten Free Ebola," the virus didn’t enter into the story – though the response of the residents of the South Park to the revelation that gluten is responsible for everything that ails them sparked Ebola-level panic. (They were especially alarmed when they discovered that, when consumed in concentrated doses, gluten can turn penises into deadly rockets.) But its use in the title of an episode that premiered at the very time that news broke of the first Ebola infected individual in the United States was further proof that “Park” is always front and center in a way other scripted programs can only dream of being, largely because Stone and Parker finish each episode so close to its premiere date (sometimes within 24 hours or, I’m told, less). Only Comedy Central (to its credit) would let them get away with that.

Every late night talk show host has in recent months mined great humor from the growing and largely groundless concern over gluten (groundless, that is, for anyone who doesn’t already suffer from celiac disease). But “South Park,” as usual, didn’t shy away from milking it for outrageous humor, without concerns for political correctness or possible controversies. For example, chubby boy-monster Cartman, unable to gorge on his usual pancakes and pizza and other gluten-rich foods once the townspeople eradicated anything containing gluten from stores and homes, began having dreams and visions of a loving Aunt Jemima, who ultimately provided the guidance needed to end the national panic.

I would guess the inclusion of Aunt Jemima wasn’t genuine product placement, but it certainly put the company out there. Papa John’s Pizza also figured prominently in the story, and there were a number of mentions of popular snack foods. Since they don’t do anything without giving it great thought, some might say that Parker and Stone were making comments of some kind about these companies. I prefer to think that they were showing the television industry a new way to serve the advertisers that keep it in business. 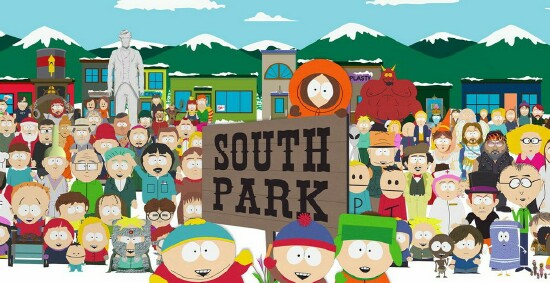 “Gluten Free Ebola” was typical “South Park” fun, but “Go Fund Yourself” was genuine “South Park” greatness, nimbly dividing its time between comic criticisms of the NFL and certain Internet obsessions while merging them into one timely tale. Cartman and his buddies decided to create a start-up company using Kickstarter to fund it. Sure enough, in no time at all hundreds of people pledged thousands of dollars to finance them, even though they promised in return to do absolutely nothing and repeatedly told their investors to go (bleep) themselves.

When Stan’s dad advised his son that “there is more to having a company than having a catchy name,” no-nonsense Stan knowingly replied, “No, there isn’t.”

The biggest problem the boys encountered (before Kickstarter was destroyed and they lost everything) was in finding a domain name that wasn’t already owned by someone else. They finally found one in FurryBallsPloppedMenacinglyOnTheTable, which proved too cumbersome. Then Cartman had a brainstorm and learned that “Washington Redskins” was available, its copyright having been pulled because of recent assertions that the longtime name of the Washington, D.C.-based NFL team is a racial slur. (The shocking graphic embellishment Cartman applied to the Redskin’s logo could not be shown in a family publication, or even most publications that don’t necessarily target families. Part of me – a diminishing part -- can’t believe Comedy Central executives allowed it to be seen on their network, even though one could make that statement about much “South Park” content going all the way back to its humble beginnings.)

The amount of current territory covered in this one episode was awe-inspiring and often breathlessly funny in its execution. As someone who could never have imagined that “South Park” would last as long as it has, after almost two decades of this stuff I now can’t imagine life without it.

Ed Martin is the Editor of MediaBizBloggers and the television and video critic for MyersBizNet. He