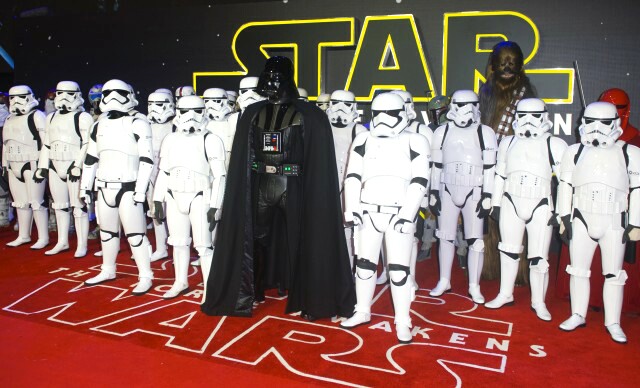 So, how many of you believe you'll be heading out to your local theater to see the new "Star Wars: The Force Awakens" movie coming out tomorrow, December 18th? If more than half of you didn't put your hand up, I find your lack of faith disturbing! According to a recent survey of more than 800 US respondents over the age of 16 from CivicScience, 59% of US moviegoers and 64% of US Millennial moviegoers are planning to see the new sci-fi epic. And according to the Hollywood Reporter, the fear of missing out has helped drive more than $100 million in domestic pre-sales for "The Force Awakens," breaking the record set by "The Hunger Games" in 2012.

While these attendance estimates might come as no surprise to anyone who has been following the build-up to what is arguably the biggest pop culture event of 2015, what may be overlooked about this projection is the enormity of the audience size that big movie events like this are generating. Although we're betting that "Star Wars" will be the "Super Bowl of Cinema" this year, the fact is that Hollywood offers major event programming many times a year, every year.

For example, back in June we already saw the largest weekend box office take in motion picture history to date with "Jurassic World," topping "Avatar" at $206 million. While the dollar figure is impressive, the more significant tidbit about it is that it represents over 25 million people pouring into theaters over one weekend to see just one film.  And if 25 million people saw "Jurassic World," just think about the approximately 9 million people who went to see another film, for a total June 13-15 weekend attendance figure of 33 million. That's more than 10% of the entire US population! Re-expressed in another way, that would be the equivalent of a national US TV rating of a 9 for total audience persons 2+! Try finding that kind of rating in primetime, even across several networks combined. Numbers like those rival the biggest live TV events like the Oscars, the Final Four and the NFL Playoffs.

But aside from how many people "Star Wars" will deliver in its opening weekend, what's really fascinating to me is looking at who is being delivered, and I don't just mean basic demographics like age and gender. Consider these facts:

Our increasing ability to glean behavioral or consumption-oriented insights about movie audiences is an exciting new trend in cinema advertising. We now have several new data sources that are key to getting the bigger picture of moviegoers, and the list just keeps growing. For example, the figures quoted above come from a rather unique data source that we tap into for real-time results or behavioral insights, CivicScience. While ostensibly an online research company, they take a very unconventional approach in gathering samples by relying upon a diverse network of web publishers to distribute their polls, which allows them to discover things about consumers, markets and audiences that you can't learn anywhere else. For example, of those movie fans who plan to see "Star Wars" in a theater:

A more traditional research resource, Nielsen's Home Entertainment Group, also recently reported that "Star Wars" fans are 9% more likely than the average American to be part of households with $70,000 or more in annual income, and spend more money than the average moviegoer on everything from candy, graham crackers, dried fruit snacks, cereal and pasta to adhesive bandages (probably due to all of those lightsaber fights). Affinity for "Star Wars" spans across races and age groups, and while fans are predominantly white (75% of households), minority households are more likely than the average American household to have "Star Wars" fans, especially Asian-Americans (17% more likely to be fans of the franchise) and Hispanics (16%). Comparatively, Nielsen noted that African-American households are less likely to be fans of the franchise, but with the addition of compelling new lead characters like Finn (John Boyega) and Maz Kanata (Lupita Nyong'o) that may change after this latest film. Jedis certainly seem to have no age, gender or lifestyle limits.

We at NCM see this in the strong interest and anticipation for "Star Wars" voiced by our own Behind The Screens community of moviegoers, recruited through on-screen advertising, film fan forums and other highly-targeted methods. This ever-growing group of more than 2,500 regularly-attending moviegoers is not meant to be a nationally representative panel, but rather a highly targeted group of consumers who love attending movies in theaters. Our community is passionate and very vocal about sharing their opinions regarding what we put up on the big screen, as well as responding to their total movie-going experience in our theaters.

So, will the premiere of the new "Star Wars: The Force Awakens" really be cinema's Super Bowl event? Our Behind The Screens members tell us "The force is strong with this one!" Impressively, 89% plan to see it at least once, 53% are planning to see it 2+ times and 23% are planning to take the journey to a galaxy far, far away in a theater near them 3+ times.  Now that's a highly-engaged audience!