StoryNEXT: Where Pioneers are Veterans 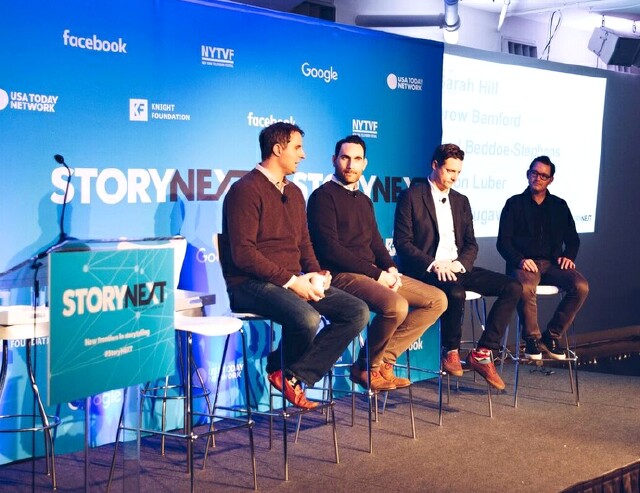 This conference was different from most as it addressed the core issues facing those in VR at a granular level. It also delved into the opportunities and potential pitfalls of immersive storytelling in the news genre.

There is no doubt that immersion is engaging; but, it is also potentially dangerous.  Just like the developer of high-end theme park rides, producers of VR programming need to consider the human factor throughout the build.  For example, the VR product development team must consider that individuals react different to stimuli and that each individual VR experience is unique.  What is exhilarating for one may be traumatic for another. They must answer questions such as, is this journalism or invasive? Is it insightful or frightful?

Three weeks ago, USA TODAY NETWORK launched VRtually There, which can be viewed on the USA TODAY app, within the VR Stories app and on YouTube.com/VRtuallyThere, which has exclusivity for the first sixty days from each episode's release. Episodes are best viewed in VR on a mobile device using Google Cardboard, but are also available for viewing on devices, tablets and computers in 360.

Despite the expensive cost of VR production and viewing devices (goggles), large and small players in media are dabbling in this emerging form of storytelling, including Google News, The New York Times, Facebook and NBC News. VR is also being explored throughout the Hollywood production community, the medical profession, the real estate business, and even the comic book and graphic storytelling community. People from all of these areas, as well as educators, attended StoryNEXT.

It is clear that VR is different from other technology and emerging media. The field is reminiscent of the early days of cinema or even cable.  VR has attracted a community of pioneers, storytellers, innovators and dynamic marketers who are sharing learning techniques, technologies, formats, considerations, successes and failures for the common good. There is a sense of collaboration and determination that is new and refreshing.  As one panelist shared, if you have been in the space for two years you are a VR veteran. There is so much for all involved to learn.