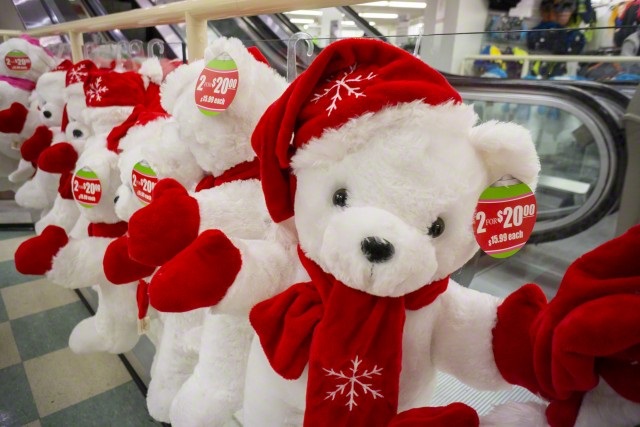 The Christmas shopping season now starts on Thanksgiving Day, followed by Black Friday, Small Business Saturday, Cyber Monday and Giving Tuesday. For the one day with nothing official scheduled, may I suggest proclaiming Sucker Sunday?

Such a designation would acknowledge that the annual holiday-time crush and rush to buy stuff is losing steam faster than the second season of HBO’s "True Detective." Indeed, some early data suggests that sales receipts in stores last Thursday and Friday fell to $12.2 billion from $13.6 billion tallied on the same two days in 2014.

Madison Avenue is worried: Results like those could foreshadow a demise for the Christmas goose that laid so many golden eggs for so many retailers for so many years. But it actually wouldn't be so terrible if marketers would stop trying to whip shoppers into a frenzy as the season kicks off. After all, attitudes about what constitutes bargains -- as well as where and when to start searching for them -- are changing.

For one thing, consumers are finally figuring out that a lot of what passes for "door-busters" is hype. That's partly because they can so easily, and continuously, compare prices on websites and apps. And it's partly because the media are helping school them on the real deal (so to speak).

Take, for instance, an article in the New York Times on Thanksgiving that in print carried the headline "Black Friday Bargains Are Fewer Than You Think" and online carried a headline promising to educate readers "How to Shop Smart This Holiday Season." An expert interviewed for the article estimated that of about 34,000 Black Friday deals on appealing, high-quality merchandise, only 0.6 percent were truly bargains. That's no typo: 0.6 percent! Yipes!

Since the Great Recession ended, there also has been a shift in the zeitgeist about unbridled consumerism. The "Shop till you drop" mentality is increasingly perceived as passe. Feeding that are backlashes: against the unrelenting hype before the holiday sales begin; against riots, fights and brawls on recent Black Fridays; and against decisions by retailers to open their doors on Thanksgiving -- meaning employees are being called into work on a day that long was a day off.

Look at all the positive responses to countermoves by chains such as Costco, Dillard's, H&M, Marshalls, Nordstrom and Staples to close on Thanksgiving, not to mention the plaudits heaped upon REI for shutting its stores on both Thanksgiving and Black Friday and asking staff and shoppers in ads and on social media to "opt outside."

There are two other big trends that are having the effect of minimizing the madness of the first few days of holiday shopping, to the point where someday Black Friday might be called Gray Friday. One is known as Christmas creep, as retailers and marketers prime the pump by starting to wheel and deal as early as July. They'd rather make the sales when customers are in the mood to buy instead of waiting for the calendar to reach November.

The other trend is the increasing popularity of buying virtually, through computers, tablets and smartphones, at any time, whether or not a brick-and-mortar store is open for business. Those revenues are counted separately from the sales volumes announced for real-world stores during the first holiday shopping weekend, and early estimates indicate that online revenues set a record and rose by double-digit percentages compared with the same period last year. (By one count, more people shopped online than in person, though sales in physical stores dwarfed those in cyberspace.)

People who shopped at actual stores ought to tip their hats to those who shopped via devices. Virtual sales seemed to have acted as a safety valve, reducing the sizes of physical crowds to less scary levels that made bad behavior less likely.

I noticed the smaller turnout when I joined the ranks of those who shopped in physical stores on Black Friday. It's something I usually avoid, but perhaps I was enticed to join the throngs after being exposed to scores of ads on TV, in print and in social media sponsored by everyone from the usual suspects -- Best Buy, Bloomingdale's, Macy's, Old Navy, Staples, Target, Walmart -- to unlikely purveyors of holiday bargains such as Bass Pro Shops, BrisketTown, the Central Park Conservancy, Chevrolet, Ford, the Financial Times, Food Network, Hyundai, 2(x)ist, Twinings and Verizon.

To replace a venerable Sharp microwave oven, I bought one from LG that was on sale at Best Buy (the price, 30% off, was no door-buster). I brought it home, plugged it in, turned it on and heard a noise that sounded just like a jet taking off in a windstorm.

Back went the oven for a refund. Back home, I plugged the Sharp back in. Maybe Best Buy should've saved the LG for Sucker Sunday.