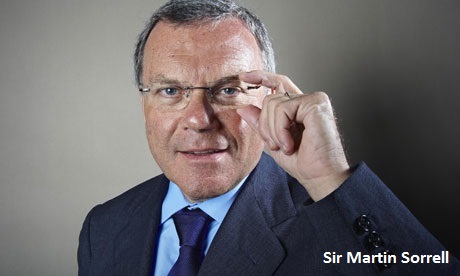 There's an observation, attributed to F. Scott Fitzgerald, that there are no second acts in American lives.  Well, what about the lives of British advertising moguls?

I'm referring, of course, to Sir Martin Sorrell, whose three decades as what the Brits call the "supremo" of WPP, long the world's largest agency conglomerate, ended abruptly in mid-April when he stepped down amid an internal investigation into charges of misconduct.  The Wall Street Journal reported that the WPP board investigated whether Sorrell had paid for a prostitute with company money; he has denied those allegations.

Sorrell soon dispelled any notions that he might go gently into that good night by, say, retiring or taking some honorary industry post.  Rather, he announced ambitious plans to build another holding group, this one designed to reflect the new challenges being confronted by the industry in the 21st century.

There was some surprise that Sorrell would seek to re-enter the fray so fast, especially given that he'll be competing against WPP, where as chief executive he built a massive firm with interests in just about every kind of ad and marketing discipline.  For example, no competitor can match WPP's status as the owner of four global ad agency networks -- Grey, Ogilvy, J. Walter Thompson and Y&R -- all of them acquired by Sorrell, some by friendly means and others not so.

But Sorrell's comeback on fast-forward makes sense.  For one thing, he really enjoys the spotlight, relishing his role as the de facto spokesman for Madison Avenue at a time when most other CEOs prefer to focus on their own bottom lines.  Sorrell is regularly sought out by journalists and Wall Street for assessments of the state of the industry; the effects of technology on traditional advertising, which inspired the title of Ken Auletta's new book about the business, Frenemies; and the general business climate, particularly the importance of growing economies like China's.  And, as it turned out, there was no impediment to Sorrell's spinning the revolving door and returning so soon to play the ad game again.

In a delicious twist, there was no language in his contract with WPP that kept him from competing with the firm in the event he left -- ironic in that Sorrell was well-known for insisting such provisions were part of the contracts signed by the top executives at his agencies.  Many senior managers who sought to leave their jobs at WPP shops for positions at agencies owned by rivals such as Havas, Interpublic Group, Omnicom Group or Publicis were kept from working for their new employers for months on end -- or, sometimes, a year or more.  That waiting period is known as "gardening leave," in that there's little the person can do but putter around in his or her garden waiting impatiently to be free of Sorrell's grasp.

Sorrell "never accepted high-level defections from his empire with a shrug of the shoulders," the British trade publication Campaign observed. Take Carter Murray, who resigned from a job at Y&R in March 2013 to become the global chief executive at Interpublic's Foote, Cone & Belding.  He wasn't able to officially join FCB until six months later.

In 2011, Sorrell went after a firm, Oystercatchers, that he felt was helping former employees from a couple of WPP agencies set up their own shop; Oystercatchers was required to issue a groveling public apology, which still can be found on the WPP website.  Sorrell "is quick to call in the lawyers when anybody tries to leave with a client in the back pocket" declared an article on the website More About Advertising.

Then there were three top executives at RKCR/Y&R who wanted to leave in November 2009 to start their own agency called Adam & Eve; they had to pay WPP 750,000 to 1 million British pounds to settle a dispute over their gardening leaves.

Sorrell's new company, named S4 Capital, referring to four generations of Sorrells, plans to grow in the same way that Sorrell pursued to make WPP so big, by acquisitions.  And surprise, surprise, he quickly was embroiled in a tiff with WPP; each was seeking to buy a Dutch digital production company, MediaMonks.

Sorrell prevailed, he announced Tuesday, with a bid valued at about $350 million, making MediaMonks the first deal made by S4 -- but not before WPP, which says it began pursuing MediaMonks last year, sent Sorrell the kind of nasty letter that used to be sent to WPP's competitors when he was in charge there.

That made for delectable grist for the mill operated by me and other advertising reporters, but how sound a strategy was it for Sorrell to get into a food fight so quickly with his former firm?  As bothered as he may be by the circumstances of his departure, there's little to be gained by taking on WPP one-on-one.  Playing the part of David to WPP's Goliath won't do much to build up his image as a tough guy; industry insiders know oh so very well how tenacious he can be.

Another issue: Sorrell still has significant ties to WPP, He remains a major shareholder, and he's in line for stock awards as an exit payout at some future date. So, going after something WPP wants hurts him as well as WPP.

And as much as Sorrell made WPP what it is today, it made him what he is today, so a battle between them hasn't covered either of them in glory.  I'd say that even though he obtained MediaMonks he had more to lose at this juncture, given how few answers there are to the questions that continue to be asked about the mysterious circumstances of his leaving WPP.

Sure, Sorrell wants, as Steely Dan sang, to "go back, Jack, do it again."  But perhaps for his first acquisition he should have looked at the gazillion or so other agencies out there that are ripe for takeover but aren't also being coveted by WPP.

Editor's Note:  Look for the next Stuart Elliott Report on Wednesday, August 8.