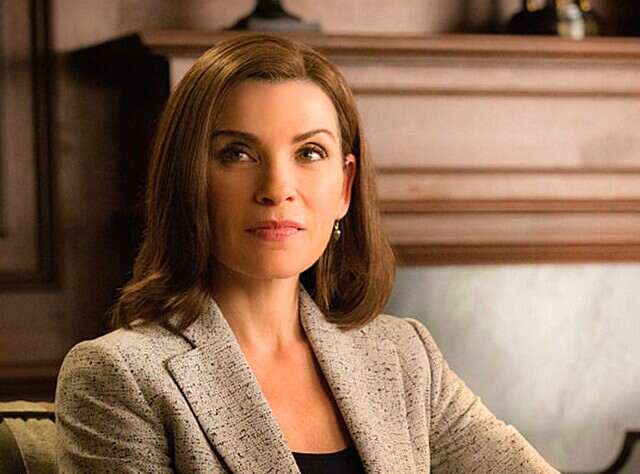 The outstanding moments of Super Bowl 50 for me had nothing to do with the game or with the commercials, which as usual offered approximately a half-dozen great ads and dozens more that collectively represented a titanic waste of money and reflected the overall lack of originality these days among creatives in the advertising community. They were, in order, the fun and family friendly half-time show, Lady Gaga’s triumphant performance of "The Star-Spangled Banner" (she has now dominated TV’s two biggest events of the year -- the Academy Awards and the Super Bowl) and the surprise announcement by CBS that this would be the final season for “The Good Wife,” which has a mere nine episodes to go before it ends.

I have to say it was a very clever and classy way to announce the ending of a blue-chip show.

In truth, and for the first time in its seven-year run, “The Good Wife” this season has felt like a show that is ready to call it quits. For reasons known only to series creators, executive producers and guiding lights Robert and Michelle King, the storylines this season have been either redundant or wildly improbable, and in general not at all engrossing.  Who thought it wise to have Gov. Peter Florrick become a potential candidate for president (which seems to have ended after a dreadful showing in Iowa) while estranged wife Alicia struggles once again to start yet another law firm, with typically combustible results? Why keep Alicia separated from her former colleagues at the Lockhart Agos Lee law firm when the real drama and much of the narrative fire on this show always comes from watching them all work together? At this point in the show’s history Alicia Florrick and Diane Lockhart ought to be a formidable duo, thoroughly involved in each other’s personal and professional lives, rather than estranged former friends who no longer speak to each other.

The season hasn’t been all bad. Star Julianna Margulies (pictured at top) continues to excel at dramatizing the intense personal and internal struggles in Alicia's life, especially as they relate to the death two years ago of her lover Will Gardner, memories of which have recently been tearing her apart. (In fact, Alicia’s breakdown scene two weeks ago should make Margulies a contender for a third Emmy win in this role.) And new cast member Cush Jumbo has been a revelation as young attorney Lucca Quinn (Alicia’s partner in her new firm). Jumbo (pictured below right with Margulies) has become so popular so fast that Twitter lit up right after the announcement during the Super Bowl that “Good Wife” was ending with suggestions that CBS spin Lucca off into her own series.

I think that’s a great idea – one that would be made even better by the inclusion of occasional appearances by any of the many brilliantly conceived recurring characters on “The Good Wife,” especially such eccentric attorneys as Michael J. Fox’s Louis Canning, Carrie Preston’s Elsbeth Tascioni, Martha Plimpton’s Patti Nyholm and Mamie Gummer’s Nancy Crozier. They all deserve to live on in some fashion if at all possible.

On a broader note, the end of “The Good Wife” could also be the end of any association the broadcast networks have with the dozens of outstanding dramas on premium cable, basic cable and the streaming services that have come to dominate and characterize Peak TV. NBC’s “The Blacklist” and all three of Shonda Rhimes’ dramas on ABC are held in high regard, but of all broadcast dramas in recent years only “The Good Wife” has consistently appeared on year-end best-of lists that are otherwise occupied by series from other areas of television. It is the only broadcast drama that has throughout its run been referred to as “good enough for cable” or “proof that broadcast television can still compete.” Only ABC’s “American Crime” can claim similar accolades, but it is a limited series rather than an ongoing dramatic series and therefore an entirely different animal.

And so it is that the passing of “The Good Wife” is a loss for CBS in particular and broadcast television in general, and very likely the end of an era. I have to say the end came fast and furious. One year ago I never would have guessed that I would be writing this column at this time.

Images courtesy of CBS. The opinions and points of view expressed in this commentary are exclusively the views of the author and do not necessarily represent the views of MediaVillage/MyersBizNet management or associated bloggers.