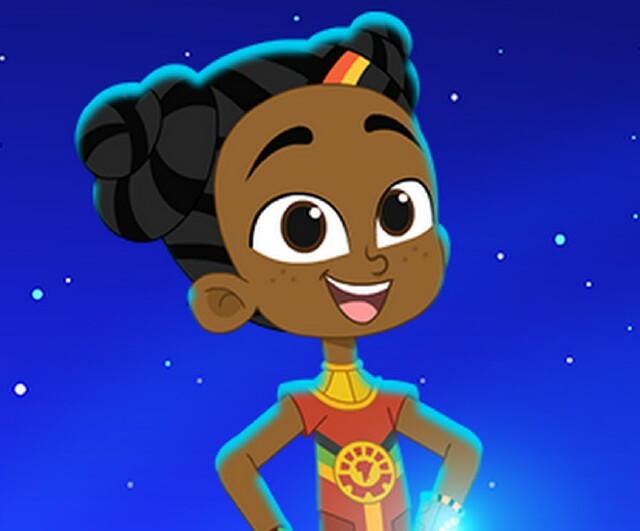 Earlier this month, YouTube Originals Kids & Family released the first episodes of the animated series Super Sema. Written by four-time BAFTA Award winner Claudia Lloyd, and directed by Lynne Southerland -- Disney's first female African-American director (Mulan II ) -- Super Sema follows Sema (above) and her brother MB as they continually save their village from its "heartless artificially intelligent ruler, Tobor." And what's Sema's special power? Technovating, whatever that is. Sema is "fueled by STEAM" (science, technology, engineering, art and math) and is the apple of many eyes, specifically YouTube itself and the all-female Nairobi-based entertainment company that created the show, Kukua.

Here's the thing; kids' shows are just that -- shows for children. As a grown man I don't expect everything to make sense on every single level imaginable because nine times out of ten there's usually a talking animal or some kind of magic or some other nonsensical thing happening on the screen and, well, the suspension-of-disbelief bar is pretty low for kids. Again, that's fine. It doesn't have to make sense; it just has to have a point.

So, what's the point of Super Sema? Well, I'm not really sure.

For comparison's sake, the point of Team Umizoomi is to teach kids math. It doesn't really matter why these tiny siblings have a sentient robot, because he's functional. He, along with the two leads, provide the context necessary for math problems to both exist and be solved. Therefore, it all makes sense, because the efficacy of its educational applications supersedes the necessity for things that non-educational shows suffer without, like solid plots and backstories.

Knowing that now, let's discuss Sema. Aesthetically (and I know I probably sound like a dumb American saying this, but), I get strong Wakanda vibes from this thing, right off the bat. The eponymous character herself (voiced by Stycie Waweru) is basically the animated version of Shuri in Black Panther, minus any semblance of a backstory. I mean, is she royalty? Is she an orphan? Is she smart and creative because of school or some kind of magic? What the hell is "technovating?" and how are Sema's strengths based in science and technology, but all we know about the villain is that he is artificially intelligent? Is the lesson that technology is good, but A.I. isn't? Beats the heck out of me.

I know, it probably seems like I'm going pretty hard on this show, and it's mostly because I am, but it's not without good reason.

If one were to visit the YouTube channel on which this series is posted, they'd notice two things. The first thing would be that the entire first season of Super Sema (which is comprised of five-minute episodes, by the way) came out just this past week. The second would be that the live action Super Sema spin-off, Sema's Lab (short segments in which two real kids do easy science experiments that can be done at home), has a ton of episodes that started getting posted as far back as last year. This is where I feel the lack of direction comes into play.

First of all, how is Sema's Lab even a thing if the vehicle for that spinoff, Super Sema, didn't premiere until a few days ago? I'm sure there's an explanation, but that part's confusing, at best.

Additionally, if each episode is only five minutes, then why not format the show for television? Take three of these five minute "episodes" and lump them together with a common theme (like how rain works), then add a five-minute segment of Sema's Lab that occurs within an episode of Super Sema and has something to do with the aforementioned theme (say, the one where the kids make rain clouds out of water, food coloring, and shaving cream). Suddenly, you've got an animated series with at least three mini-episodes per episode (a la Teen Titans Go or The Powerpuff Girls) that also has a built-in educational aspect.

Now, there's no need to flesh out Sema's backstory or explain the why of anything happening at all, because it's all a vehicle for whatever lesson's being taught in that episode. Would this be more work? Definitely. Would it be worth it? Yes, I think it would.

My last little gripe is this: 95% of the animation is perfectly fine. But I think the bad guy in the series, Tobor (voiced by Elsaphan Njora), needs smoother, slightly less Adobe Flash-looking animation. (My animator friends out there will know what I'm talking about). There's no reason Johnny Bravo's big ass can nimbly bounce around the screen all day while Tobor occasional seems to have the mobility of a greeting card. (Remember Johnny Bravo?)

Listen, I've always been known to hold Black shows to a specific standard of quality, and Super Sema is no different. I love the fact that there's a show out there by an independent, non-American company that represents another aspect of Black culture, and is meant to be fun, wholesome and educational, but if we're going to do something, we've got to really do it. There can't be any question about the quality of our work or the caliber of our professionalism, and unfortunately, we're still in an age when every Black show either helps or hurts every other Black show. I'd rather they help. Super Sema could definitely be one of the helpful ones; it just needs a little more work.