Fox’s “The Exorcist” Scores with the Scares 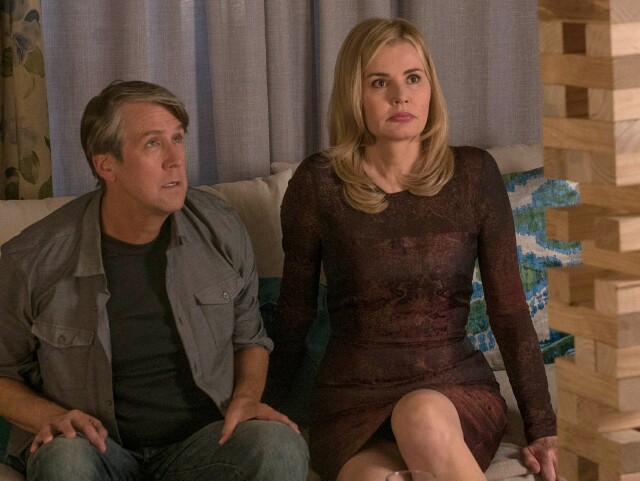 The first new broadcast series of the 2016-17 season to reach out and grab me by the throat with its second episode is Fox’s “The Exorcist.” Win or lose, I’m sticking with this one for as long as the network does.

Frequently, second episodes of new shows fail to live up to the promise of their pilots, derailing momentum in much the same way that sophomore slumps compromise series that soared through successful freshman seasons. It’s not all that surprising, given the amount of time and money that go into the writing and producing of a pilot versus subsequent episodes – a circumstance that often leads to pilots setting expectations that can’t possibly be lived up to in the episodes that follow. But the second episode of The Exorcist did the opposite – it was much more effective than its pilot, and it made clear that there is something much bigger at play than the story of a high-powered Chicago businesswoman turning to a priest for help when members of her family show signs of being tormented by a demon. It was exponentially scarier and more interesting than the two sequels (Exorcist II: The Heretic and The Exorcist III) and the prequel (Exorcist: The Beginning) to the legendary movie.

I’m not going to divulge details of the spine-tingling sequence that made shockingly clear how different The Exorcist the Series is going to be from The Exorcist the Movie – but the story is made all the more vivid and engrossing (emphasis on "gross") because it has been established that the narratives of the movie and the series take place in the same fictional space. Apparently Father Merrin (Max von Sydow) knew what he was talking about when he spoke of the immense power of evil – because the horrors witnessed during the epic struggle to save young Regan MacNeil (Linda Blair) from the demon that inhabited her in the movie arguably were dwarfed in the second episode of the series. Is there only one demon at work in this story? Has the dreaded Pazuzu returned? Or, to quote Dana Carvey’s immortal Church Lady, could it be … Satan?

After more than a decade of watching Sam and Dean go after ever-bigger bads on Supernatural I can’t even begin to process a story of this kind without wondering what the Winchester brothers would do. Time and again they’ve been up against bigger horrors than this.  In this instance I also find myself thinking about Regan MacNeil’s likely reaction to the escalating horrors in Chicago, which will certainly become a media sensation as they continue to mount. Would she somehow be drawn into it?

There has been much giddy speculation among bloggers that Linda Blair might appear in the series as a guest star, reprising the role that made her a household name. But I feel the most interesting guest appearance would be by Ellen Burstyn as Regan’s mother Chris, who as a successful, self-made woman has much in common with businesswoman Angela Rance, the mother of two endangered daughters played by Geena Davis in the series. (Davis is pictured at top with co-star Alan Ruck.) Think about it: Burstyn is enjoying a career resurgence, with an Emmy winning performance in the USA limited series Political Animals and, more recently, Emmy nominated guest appearances on the CBS comedy Mom and the Netflix drama House of Cards. (She lost in both categories. She was robbed, twice over.)  She would be phenomenal in a return (however brief) to one of her iconic roles from the '70s.

With the exception of certain vulgarities, which would now be seen and heard on advertiser supported cable likely without a peep of protest, the graphic horrors depicted in the first two episodes of The Exorcist the Series aren’t very far removed from those seen in the movie.  Isn’t it interesting that the terrible things in the movie – which had patrons fleeing from theaters, fainting, becoming physically ill and renewing their commitment to Sunday worship – today have so littel comparative impact in filmed content, even on kids?

Contrast and compare: A friend and I managed to gain entry to a theater to see the movie (we were underage at the time).  He had to take a break midway through it and sit in the lobby. I watched every minute, did not sleep for two days and was haunted by the sights and sounds of it all for months to come.  I recall teens and young adults at the time who saw The Exorcist wishing they could “un-see” it.  I was one of them. In fact, I have never again watched the movie in its entirety, for fear of reliving a youthful trauma.  So I am one of the least likely people to support the series, given that it has revived interest in a franchise I would have preferred to forget. But it is so well done and so perfect an illustration of how entertainment content (and society’s response to it) has changed during my lifetime that I can’t resist.

Pea soup has been synonymous with The Exorcist for more than 40 years because of a sequence in which Regan spewed green vomit at Father Karras (Jason Miller) as he was trying to help her (see video above). That was properly revolting at the time, but a sequence involving vomit in the second episode of the series was even more disgusting – and it was topped off by the arrival of a creature I cannot describe without spoiling one of the most nightmarish things I have seen on television in a while, including the grossest gross-out moments on AMC’s The Walking Dead and Fear the Walking Dead and FX’s American Horror Story.

Which brings up an interesting point: I believe that if The Exorcist the Series were on either of those networks, especially FX, critics everywhere would be tumbling over themselves in a collective frenzy to be among those heaping the most praise upon it. But many critics don’t like to do that with a broadcast series unless it absolutely cannot be helped, for fear of seeming old and dusty. They ought to be paying more attention to this show, if only because it seems to be delivering something so many others don’t – the promise of perpetual payoffs.  If the devil is in the details, someone involved with the well-constructed The Exorcist is likely sleeping with a light on.