Suspense Is One of "Killing Eve’s" Superpowers 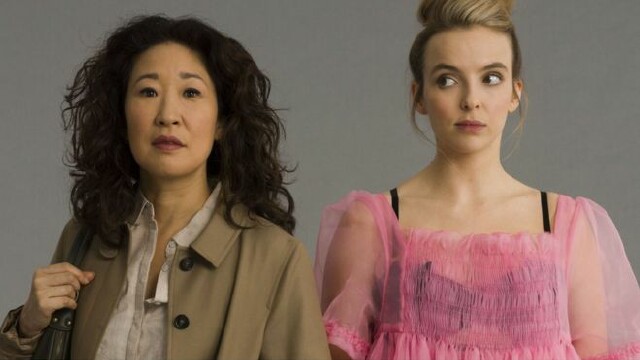 BBC America'sKilling Eve has to be one of the most intriguing and clever thrillers on television (or any screen) ever.  Created by the ridiculously talented Phoebe Waller-Bridge (Fleabag, Solo: A Star Wars Story), and starring Jodie Comer and Sandra Oh, Eve’s second season of murder, make up, madness and mind games has picked up right where its first left off, and so far it’s been the definition of “keep that same energy.”

As any connoisseur of fine television knows by now, Sandra Oh plays Eve Polastri, MI5 officer turned MI6 agent, who was tasked with tracking a prolific and flamboyant assassin named Villanelle, played by Jodie Comer.  As their “relationship” progressed, they became increasingly obsessed with each other, both professionally and personally, usually to the detriment of their respective “careers.”  In Season One’s shocking finale, Eve had finally found and impetuously traveled to Villanelle’s Paris apartment.  Shortly after, Villanelle arrived, and after a seemingly sincere heart to heart, Eve stabbed her in the abdomen while her guard was down.  Eve then ran to find rags, and upon her return Villanelle was gone.

Right out of the gate this season there was a super-impressive long take (a la Birdman or Children of Men).  Starting a literal 30 seconds after the last moment of last season’s cliffhanger, the “one shot” followed a confused and terrified Eve coming out of Villanelle’s apartment and making her way down a winding staircase.  From the stairs she noticed some suspicious looking types in French EMT uniforms entering the building, and quickly doubled back.  The camera left her, instead following the supposed EMTs as they ascended the stairs. After they passed, Eve emerged from her last-minute hideaway and continued descending just in time for both her and the camera to glance up and catch the “EMTs” shooting Villanelle’s geriatric neighbor in the face.  Even more terrified, Eve quickly and quietly pushed on, making her way out of the building just in time for a call from her superior, Carolyn (the fierce Fiona Shaw).

This take, its smooth camera movements, carefully planned angles, and perfect timing, did not go unnoticed.  Neither did the lack of any score during that entire sequence.  The scene’s level of intensity was ratcheted up by the sound of Eve’s shoes and accelerated breathing echoing in the empty hallway.  There was no need for musical cues, or even lines, because the visual cues and limited third person view of the situation as it unfolded were more than enough to convey its ratchet up the tension.  Even without the context of the previous season, the vibe of impending danger was very clearly conveyed, as Eve was obviously in distress (see headline above).

Another interesting aspect of this new season is the position we now find Villanelle in.  Last season, she was a force to be reckoned with, which made sense, because she’s usually the most dangerous person in any room.  This season, however, more oft than not we find her in a place of vulnerability.  She starts the season wounded, even though her interest in Eve is now peaking.  (For her, Eve stabbing her is an indication of how strongly she feels for her, which feels like reciprocation.)  That stab wound puts her in many precarious situations in the first couple of episodes, which made me root for her.  She’s the bad guy, obviously, and I imagine whatever’s going on between her and Eve won’t play out well for either of them, but when the chips are down for Villanelle, I often find myself hoping she makes it through.

Now, Villanelle’s assumption that Eve loves her would seem pretty far from the truth, if it weren’t for the fact that Eve’s acting so strange.  She’s operating less and less from a place of logic, and more so from a place of just wanting to find Villanelle.  In the first episode of Season Two, her jittery behavior gives an implied ex-addict the impression that she is herself struggling with addiction.  Eve laughs this off, because she’s not a “junkie” (at least not for drugs).  There are also multiple moments where one is referred as “your girlfriend” to the other, which feels like a cheeky nod from the writers to the fans.

It shouldn’t even need to be said, but Jodie Comer’s performance as Villanelle -- the sociopathic killer with a love of high fashion, a propensity to show off and a level of maturity rivaling that of a child -- is everything.  Her sense of humor, combined with the lack of value she places on human life, are an immensely entertaining watch.  It’s all about nuance.  The same can be said for Oh’s dramatic abilities which, when combined with Comer’s, build the foundation of this entire series.  (See Oh’s tub scene in Episode 1, Season 2.)  This is even more impressive when you consider that, to date, they have spent 90 percent of the series apart.

The separation between Eve and Villanelle alone is suspense-building by its very nature.  The irony of it all, especially as evidenced in more recent episodes, is built right into the fact that Villanelle has no idea Eve is reciprocating her feelings a bit.  When frantically trying to leave Eve a voicemail at MI6 she exclaims, “Eve Polastri, you piece of shit!” which is misinterpreted as aggression aimed at Eve and not the annoying robo-operator on the phone.

In Eve’s most recent episode, Villanelle mails Eve a postcard with a hint pointing to her most recent stylized murder, but it’s intercepted by the ever-calculating Carolyn.  This was such a telling move because Carolyn is tasked with accomplishing certain goals and Eve’s talents need to be directed towards those efforts, even if she has to be reined in from time to time to get it done.  It’s starting to feel like Eve and Villanelle aren’t all that different.

My favorite aspect of Killing Eve this season (besides everything) is obviously its ability to maintain the same level of intrigue it established during the last.  There are even more secrets, plot twists and “oh sh*t” moments than the last time around, and since it’s already been greenlit for a third season it’s pretty much guaranteed that we’ll get even more.  We’re four episodes in at this point, and all I know is that waiting to see what happens next in Killing Eve is killing me.