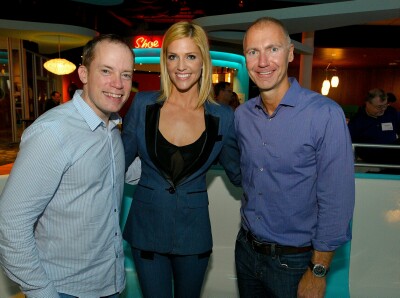 Syfy on Sunday and Monday in Orlando produced its eighth annual Digital Press Tour – a one of a kind event in television publicity and promotion that puts the network's executives and the stars and producers of its series together with influential bloggers, robust tweeters and other digital communications experts and enthusiasts who operate outside of what might be referred to as the "traditional" press.

The digerati that attend this event every year aren't the same people commonly found at other media press functions such as the twice-yearly Television Critics Association tours and the Upfront and NewFront presentations and parties that every year overwhelm reporters' schedules from February thru May. Rather, these folks focus almost exclusively on science-fiction and fantasy content, a particular sweet spot in the digital space. In other words, there is no filler here. Every attendee has a following that potentially supports the programming that Syfy offers.

One of the most interesting aspects of the Digital Press Tour is the fact that everyone at Syfy from network president Dave Howe on down actively encourages the digerati to not only interview talent and producers but to shoot videos of them and take photos of them. Taking pictures at other industry press events (including those mentioned above) can result in reporters being ejected from said activities or given stern warnings. Bizarrely, the taking and posting of photos – now as common an occurrence in everyday life as breakfast, lunch and dinner – is forcibly frowned upon at many industry gatherings of press and talent. That has never been the case at a Syfy tour.

As one senior Syfy executive remarked to me, "At other media events people are told to put away their phones. Here we tell people to keep them out and use them."

That interaction was encouraged throughout all Digital Press Tour events, including the opening night dinner at Antojitos in Universal CityWalk; bowling with the cast of the upcoming miniseries "Ascension" at the Galaxy Bowl at the retro Cabana Bay Beach Resort; "mingle" sessions with talent after each of seven press conferences; a luncheon with "Face Off" host McKenzie Westmore, and the closing night event at the two Harry Potter theme parks here – The Wizarding World of Harry Potter – Hogsmeade and The Wizarding World of Harry Potter – Diagon Alley. (The fire-breathing dragon pictured below is perched atop Gringotts Bank in the latter.) Those parks were closed to the public Monday night allowing Digital Press Tour guests and Syfy talent easy access to all of the attractions in both.

This is the fourth Syfy Digital Press Tour that I have attended, and every time I come away with the same question: Why haven't other networks tried to produce events similar to this one? I ask this question especially of Syfy's sibling networks in the vast NBCUniversal Cable networks group, many of which 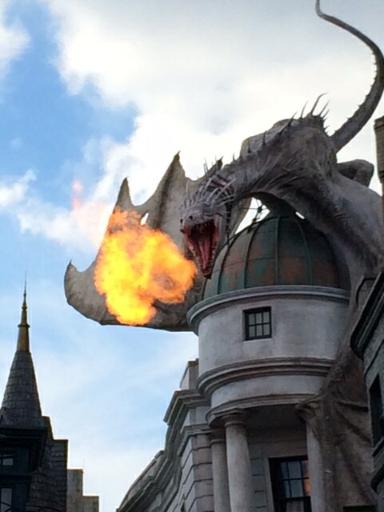 would seemingly benefit from similar customized publicity events -- especially such lifestyle networks as Bravo, E!, Oxygen and Esquire. To its great credit, Syfy has been doing this for eight years, having embraced the potential of digital communication in publicity efforts long before the rest – and long before social media exploded and became an integral part of everyone's daily lives (not that it wasn't happening back then, but it has grown exponentially since 2007).

In terms of publicity, Syfy has managed to stay out ahead on all fronts. Of course, the same hasn't always been true of the network's programming, especially its reality area, which has in recent years offered a mix of the sublime ("Face Off," one of the best reality competition series on television), the ridiculous (take your pick) and the utterly irrelevant ("WWE Smackdown!"). But even when the programming has been sub-par the Digital Press Tour has made it seem like something extremely special.

During their session with the digerati that kicked off a full day of press conferences at the Loews Royal Pacific Resort, Dave Howe and executive vice president of original content Bill McGoldrick repeatedly reinforced the message that as the network moves into 2015 its focus will return to top quality productions in the tradition of Steven Spielberg's massive 2002 miniseries "Taken" and the much-missed modern classic "Battlestar Galactica."

"Everyone and his dog are now developing science-fiction fantasy shows," Howe said. "People aren't interested in low production values anymore. They want big, expensive shows. That's what they are responding to."

"A whole new audience is growing up with science-fiction and fantasy," he continued, citing such mainstream entertainment properties as "Twilight," "The Hunger Games," "Divergent" and "Game of Thrones."

"We are trying to win back the genre," McGoldrick added. "I don't think we're scratching the surface of overkill. Most of the best writers are writing genre right now."

This explosion in genre franchises and the surging development of related scripted content at almost every broadcast and cable network is going to make it exponentially more difficult for a network devoted to same to stand out from its ever-expanding competition. Syfy in the year ahead will attempt to do so with the miniseries "Ascension" (starring Tricia Helfer, pictured at top with McGoldrick and Howe), new scripted hours "12 Monkeys" and "Killjoys," new seasons of "Defiance," "Dominion" and "Helix" and a miniseries adaptation of Arthur C. Clarke's "Childhood's End." And "Sharknado 3: Feast Coast," the network's hot movie franchise, this time set in Washington, D.C. and Orlando.