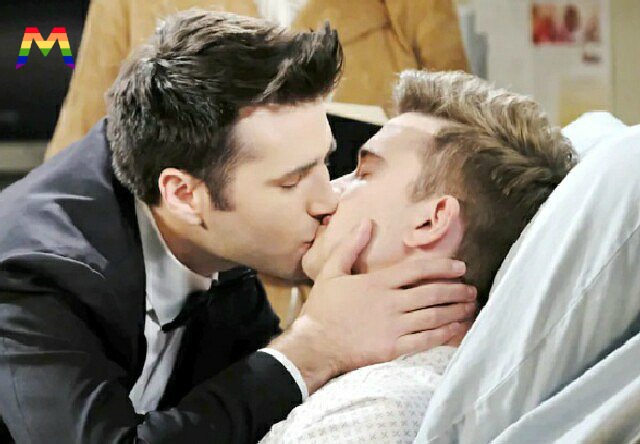 NBC’s Days of Our Lives has been on fire of late, and at the center of the inferno has been a pair of star-crossed young lovers viewers have been invested in for years, hoping all the while that they might have a chance at one of those happy endings that soap couples rarely enjoy.  These two have been through everything imaginable – one was even murdered (on camera) only to be brought back to life (off camera) without any memories of the past by a mad doctor who had developed a serum to cure such annoyances as death, then cared for in a cabin in Nashville by the loony-toons double of the show’s primary villainess.  When the young lovers were finally reunited a host of new issues began, including romance with another man, a torrid love triangle, a forced marriage to yet another man with an agenda, and fast-growing inoperable brain cancer (since eradicated) that threatened to keep the lovers apart forever.

Fun fact:  The two lovers who have endured their share of soap opera trials and tribulations are gay men – Will Horton (played by Chandler Massey, top right) and Jackson “Sonny” Kiriakis (Freddy Smith, top left).  They have been together (or in each other’s romantic orbit) for years (except for a few when Will was dead).  They were married years ago (before the murder) in what was the first gay wedding in daytime drama history.  They recently remarried, the first marriage having fallen apart as a result of the murder, the resurrection, other men, etc.

Perhaps in honor of Pride Month … or perhaps not … Will and Sonny are finally together again as happily married husbands … for now.  More crises surely await.  And that’s the point.  Days of Our Lives has burned through a number of writers in recent years, but all of them (except for the boneheads who decided to murder Will) have treated Sonny and Will not as anything special but as just another long-suffering couple on the show.  They work, they are involved in the lives of family and friends, they kiss in public, they have sex in private, they fight, they make up.  The two actors have played their share of sexy bedroom scenes over the years, as have other actors who have played gay men with whom Will and Sonny have been involved.

In short, they are not treated any differently than the dozens of straight characters on the show (though Will’s prolonged coming out story years ago was highly melodramatic).  That is progress.

It was under the auspices of current head writer Ron Carlivati, who took the reigns of Days of Our Lives in early 2017 after a long stint on General Hospital, that the decision was made to bring Will back from the dead.  The show has been the better for it ever since.  He’s a legacy character who had been on the canvas since childhood, and then through his tumultuous teens, and now as a good guy who needs help as often as he offers it.  Massey has been honored with three Daytime Emmy Awards for his portrayal of Will.

Something similar is happening over on General Hospital, which currently counts three gay men, one lesbian and one transgender woman among its recurring characters – though none of them are as dominant on that canvas as Will and Sonny almost always are on Days.  Lucas Jones (Ryan Carnes) and Brad Cooper (Perry Shen) adopted an infant son last year, and now find themselves entangled in a custody battle that would take far too long to explain here.  What’s worth noting here is that Lucas and Brad, like Sonny and Will, are caught up in a melodrama that has little (if anything) to do with their sexual orientation.  Over the years the writers haven’t been afraid to make Brad unlikable, or at best a complete f*ck-up who is no better or worse than all the f*cked-up straight characters on the show (and there are many).  Again, progress.

There have been other notable LGBT characters in daytime dramas through the years, including Maya Avant (Karla Mosley), a transgender character who finds true love, currently on The Bold and the Beautiful; Billy Douglas (Ryan Phillippe) on One Life to Live (the first teenaged gay male on daytime, circa 1993); Oliver Fish (Scott Evans) and Kyle Lewis (Brett Claywell), also on One Life to Live (circa 2009), who became a “super-couple” (known as “Kish”) and were seen in daytime’s first-ever torrid sex scene between two men; Lynn Carson (Donna Pescow), the first lesbian soap character, on All My Children (circa 1982); Bianca Montgomery (Eden Riegel), daughter of the legendary Erica Kane (Susan Lucci) on All My Children (for more than ten years beginning in 2000); Zoe (Jeffrey Carlson) also on All My Children (circa 2006), daytime’s first transgender character; Olivia Spencer (Crystal Chappell) on Guiding Light (1999-2009); Luke Synder (Van Hansis) on As the World Turns (circa 2005-10); Vincent Clarkson (Phillip Jeanmarie) on Passions (circa 2007), the first intersex character on daytime, and Channing Capwell Jr. (Robert Brian Wilson) on Santa Barbara (circa 1984), the first bi-sexual male on daytime.

In the spirit of World Pride, it should be noted that daytime and primetime soap operas in other countries have been and continune to be way out in front of American daytime television as far as the inclusion of LGBTQIA+ characters.  There have been many reasons for this, from the actions of powerful pressure groups to nervous affiliates to skittish advertisers.  But that all seems to be changing, now more than ever.  Credit may go to cable (especially MTV's groundbreaking reality soap The Real World, back in the day), streaming services and even primetime broadcast television (Ellen, Will & Grace, Grey's Anatomy) but daytime drama has clearly done its part, if not led the way.