Tamera Mowry-Housley Returns to Acting in Hallmark's "A Christmas Miracle" 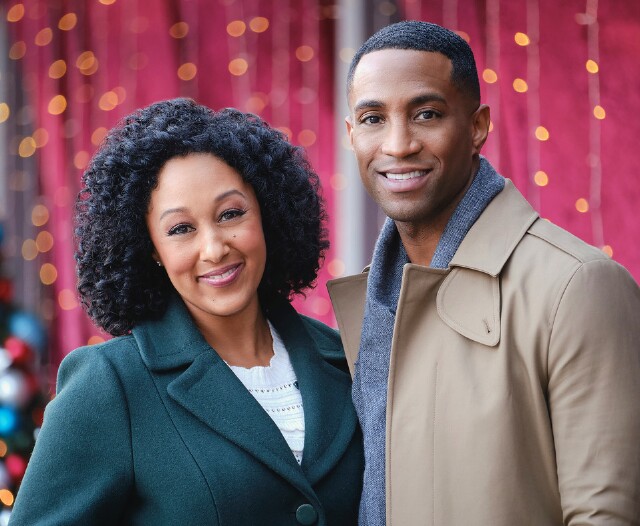 Tamera Mowry-Housley ends her seven-year hiatus from acting this week with the Hallmark Movies & Mysteries premiere of A Christmas Miracle, co-starring Brooks Darnell (pictured above with Mowry-Housley) and Barry Bostwick.  “It’s my first Hallmark film, so I’ve [finally] joined the mix and you know what, I love it!” she told MediaVillage during an exclusive interview.  “I’m now addicted, as I love their brand.  It was a no-brainer for me to partner with them because it’s organic and natural.

“I’ve always wanted to do a Hallmark movie,” she continued. “Last January I met with an amazing producer (Stephanie Germain), with whom I share an agent, and presented my idea.  My husband was a journalist, so I wanted to play a writer, and the story had to center around a single mother.  We came up with the story, I pitched it to Hallmark, they loved it and bam, we started shooting in late August.  We did it!”

In addition to a return to acting, the film afforded Mowry-Housley the chance to executive produce.  Given her extensive tenure in showbiz, she was a natural.  “It’s the first time I’ve executive produced something alone,” she revealed.  “And this is not just a title.  I was very hands-on.  That’s what I loved about it.  I went through the script editing process, made revisions and suggestions.  I watched all the casting videos -- every single one of them.  I [also] got to choose the cast, so it was a lot, and when I was shooting, I was producing at the same time and literally choosing the take I liked best so that we could move on.” 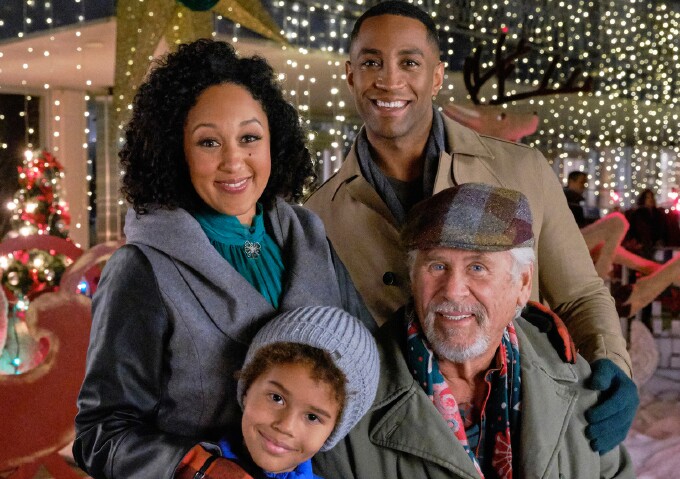 In the film, Mowry-Housley stars as Emma Sanderson, an upbeat single mom who’s just relocated to Denver and landed a temporary job as an executive assistant at a lifestyle magazine.  With hopes of also writing for the magazine, Emma tackles her first assignment, looking for a worthy Christmas miracle story for the magazine’s holiday issue.  It’s during that search she finds a lonely local street musician known as Santa Dean (Bostwick, pictured above right with Mowry-Housley, Darnell and Gabriel Jacob-Cross, who plays Emma's son Tyler).  Turns out he has more of a story to tell than he’d like shared.  Couple that with a budding romance with the magazine’s staff photographer, Marcus (Darnell), and you have all the makings of a very “different” kind of Christmas movie.

“You said the word I actually wanted to hear,” Mowry-Housley replied when I suggested the film varied greatly in tone from most Christmas fare.  “It is different, that was the appeal for me and what I was aiming for,” she said.  “It’s maybe a little edgier.  Being the executive producer, I did have a little bit more control over the film.  I wanted it to be a little more grounded.  It’s a very diverse film.  Being a co-host on The Real I know how important it is to have representation, because it matters, and I wanted the film to portray that.  So, hearing you say that really means a lot to me.

“I do have single mom friends,” she added. “I see what they go through; it’s challenging enough to be a mom and having to do a lot of those things by yourself is even more challenging.  We’ve talked to a lot of single moms on The Real, so it was important to create a story, not only for moms and the families that love Christmas, but a story specifically for single moms that gave them a sense of hope and just let them know that I see you, and you’ve got this.”

While Mowry-Housley is delighted to be a part of the Daytime Emmy Award-winning talk show The Real, she admits that since the show went live, “I’m up at 3:30 a.m., and that never gets any easier.  But what I love about The Real is it’s a platform for women of color to encourage others and be positive examples.”

She’s also thrilled to be acting again.  “There was a part of my creative side that felt a little dormant,” she admitted.  “I thank God for my team and for the Hallmark family for allowing me to do this and trusting me with this film.  It was so much fun, and I couldn’t wait to act again.  I also wanted to make sure my first acting gig after my hiatus was a great one and a great fit.  I’m very thankful that Hallmark did that for me and I would love to be back for more!”

Mowry-Housley also revealed that a reunion of Sister, Sister (the fondly remembered separated-at-birth sitcom in which she co-starred with her twin Tia for six seasons) is not off the table.  “We’re talking about it,” she shared.  “This is a good problem to have - - we are both so busy but open to it.  I’ll be into a Sister, Sister re-do until I’m 90.  I’d love to have them reverse characters.  Tia Landry was a mom, and following a divorce, now wants to live life like it’s golden and party.  And because Tamera Campbell was the wild one, she would be the scrapbooking Pinterest mom.  I think that would be the best scenario, but that’s just me thinking off the top of my head.”

A Christmas Miraclewill be telecast Thursday, November 14 at 9 p.m. on Hallmark Movies & Mysteries as part of the network’s annual Miracles of Christmas programming event.