Beverly Hills, CA -- Revolt TV and Pivot, two new networks that are targeting Millennials as their primary audience, recently hosted presentations at the Summer 2013 Television Critics Association tour during which their top executives explained how they are going to attract a generation of digital and social media obsessives who are widely regarded as having little if any interest in conventional broadcast or cable TV.

Revolt TV offered only a breakfast, the highlight of which was a brief appearance by network founder Sean Combs, who made his way around the room introducing himself to every critic and reporter,

instantly winning over the crowd with his simple basic graciousness. His message about Revolt, which will be a largely music-driven entertainment channel, was this: "If you're a Millennial and you want music you have nowhere to go. You are homeless and out there all alone."

Revolt, he continued, "will cover music as a culture. It will not be a remix of MTV, not another version of BET. It will be a multi-cultural, new American news network [that will] cover news of music and music culture."

"Young people have been unplugging from cable and running to the Internet," Combs said. "Nobody understood [why that was happening], but I did. The No. 1 interest for young people is music." Revolt, he noted will launch "in a few months."

Pivot, which launches today, produced the more formal presentation, parking network president and chief executive officer Evan Shapiro and an assortment of twenty-something chatterboxes on stage in the International Ballroom at the Beverly Hilton Hotel. Shapiro was a much livelier presence, but in every other way the Pivot session had TCA members flashing back to the Summer 2005 TCA tour when Al Gore appeared on the same stage along with a smaller group of twenty-something chatterboxes to

launch Current TV, which was going to revolutionize television, attract a new generation of young people to a medium that had in their eyes become dusty and outdated, thrive as television by young people for young people, etc. We know how that turned out.

Introducing the panel, Shapiro had much to say about the state of the new world order and the role that Millennials will play in it. "Clearly, the world and the media industry are at a critical juncture, a turning point," he declared. "Literally, pivot means to turn. So rather than fear a disruption in the world around us and in the industry around us, rather than fearing this turning point, we're leaning into it. This starts with our audience. We are a next generation television network for the new greatest generation, Millennials. [Yes, there were gasps and grumbles in the room when Shapiro dared to go there and compare the current generation of young people with the one that came of age and sacrificed more than any of us can imagine to both save and change the world in the '40s.]

"Where other people may see navel gazing, entitled narcissists, we have a hero generation ready to take on the challenges that are present in the world, challenges they didn't create," Shapiro said, as the grumbling continued. 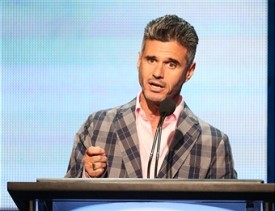 There was lots of talk about what the various news, talk, information and entertainment shows on Pivot would say about and do for young people, as opposed to all people. Time and again young adults were spoken about as if they exist in some kind of bubble where nobody else matters. And none of the people on the stage betrayed any knowledge of or interest in the challenges faced by young people in virtually every generation before theirs – challenges that were met without the economic and technological advantages most Millennials enjoy.

That said there was no denying the energy emanating on stage from Shapiro and his youthful colleagues. If that truly informs the programming on Pivot – on TV and via other distribution platforms – this could be one of the most successful and talked about network launches in years.

Shapiro noted that Pivot is launching 31 years to the day that MTV made its historic debut. Like the Revolt TV panel earlier in the day, the subtext of the Pivot session was that MTV has dropped the ball in entertaining and informing young people, choosing instead to fill its schedule with cheap reality shows and a couple of modestly successful scripted projects. "Even our business model embraces the disruption around us," Shapiro exclaimed. "Thirty years ago, cable was the disruptive technology in television. Recently, we've seeded that mantle to other players who use our pipes. We want to help reclaim the disruption for our industry."

The cheerfully and forcefully outspoken Meaghan McCain, on hand to talk about her new Pivot series "Raising McCain," pounded yet another nail in both the MTV and Current coffins. "Current never would have hired me," she said. "Start there. I'm a Republican. Just start there and bypass Current. I would have never happened on Current. In my opinion the biggest threat to youth in America is the polarization

in American politics. I came to Pivot because I think there has to be some kind of middle ground between the Kardashians and C-SPAN.

"Young people can't just be given these two options," McCain continued after the laughter in the room died down. "You laugh, but it's true. Come on. When I was growing up, MTV News was loud, proud, really inspired my life in a really real way. That doesn't happen anymore. I want to give people information, but not talk down to them. I know what it feels like to have people talk down to you in relation to politics and American culture and issues that are facing us. I'm so excited that I have a show where I can be myself and be crazy and talk about issues that really affect me, in an intelligent way that doesn't scare the head of this network."