Beverly Hills, CA -- National Geographic Channels kicked off the 2013 Summer Television Critics Association tour in fine style, with an opening night party Tuesday on the rooftop terrace of the Beverly Hilton Hotel attended by the networks' executives and talent and a group of sessions yesterday morning that were as interesting and engaging as almost anything else we are likely to see during this annual summer gathering of television critics, reporters, bloggers and tweeters.

It was a reassuringly upbeat start to a tour that has been perpetually compromised since late June, when both ABC and NBC shockingly decided not to offer any panels or sessions on the second day of their two-day blocks on the tour after the full schedule had been finalized and journalists traveling at significant expense to attend had already made their reservations. This meant that neither network saw fit to offer sessions for series on its siblings' cable networks as they often do on one of their two days. Nor did they care to take full advantage of having more than 200 representatives from almost every major newspaper, magazine and Internet entity assembled under one roof, all ready and willing to attend sessions not only for new fall series but for returning shows, news programming, late-night shows, daytime shows, summer shows and other broadcast fare.

On top of that, Al Jazeera America – a news channel that will launch next month -- was scheduled yesterday to present the first session of the tour, but cancelled less than 48 hours before. This was especially upsetting for many TCA members whose editors had been interested in columns about this potentially controversial new network. Al Jazeera America has been bombarding reporters this week with press releases about many executive hires, but apparently not one of those people was deemed capable of sitting down with reporters for 30 minutes and discussing even in general terms the strategy behind the network. What's up with that?

So after all that turmoil and disrespect, imagine how pleased TCA members were to find National Geographic Channels taking the opposite approach to utilizing their tour time, not to mention that of TCA members. The party Tuesday night gave reporters ample opportunities to talk to Nat Geo executives and talent in a relaxed, festive atmosphere – something they would not have had if Nat Geo had chosen only to present its panels on Wednesday morning. In a nice touch, there were about a dozen dogs on hand to generate interest in Nat Geo WILD's upcoming special "The Secret Life of Dogs." (Celebrities, executives, show-runners and newsmakers are often stimulating guests at TCA tours, but historically nothing attracts TCA members like animals, especially dogs.)

The dogs were back yesterday morning at the start of Nat Geo's TCA panels, which also included a little toy pig and an augur falcon, from which the pig was protected as it swooped over the heads of critics in the Beverly Hilton International Ballroom before landing on the arm of Jeremy Brandt, host of the 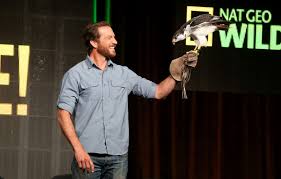 upcoming Nat Geo WILD series "Jobs That Bite!" In the show, Brandt will see what it's like to work a variety of jobs involving animals and other creatures, from ostrich wrangler to beehive remover. That session also featured a video shot outside Tuesday night's party in which Brandt instructed several TCA members on how to milk a goat. (Nat Geo always seeks to get critics directly involved in the creation of its TCA presentations. Last summer it put several of them through challenging visual tasks for a video promoting the new series "Brain Games." Seems this is a winning strategy: "Brain Games" has since become the highest rated series in NGC's history.)

The Nat Geo sessions also included a panel for the upcoming NGC series "Doomsday Castle," a spin-off of the reality hit "Doomsday Preppers," which will follow one family's efforts to complete the construction of an enormous castle in the Carolina mountain region designed to keep them all safe in the event of a national or global disaster.

"Nothing brings a family together like Armageddon," observed the always jovial National Geographic Channels chief executive officer David Lyle when introducing the panel.

The final session was for the drama "Killing Kennedy," which is based on the book by Bill O'Reilly about the assassination of President John F. Kennedy by Lee Harvey Oswald and will premiere in November to mark the fiftieth anniversary of that history changing event. Cast members on hand included Rob Lowe 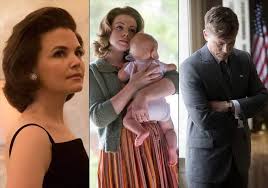 (who plays JFK) and (via satellite) Ginnifer Goodwin (who co-stars as Jacqueline Kennedy). In another of those attention-to-detail touches at which Nat Geo excels throughout its TCA presentations, critics received a full-size print of the cover of the controversial February 21, 1964 edition of Life magazine, which featured a chilling photograph of Oswald in his backyard holding the rifle he would eventually use to murder the president.