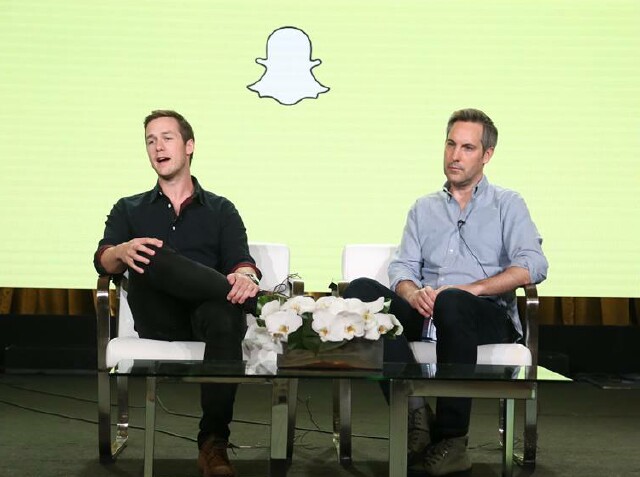 Pasadena, CA -- In yet another example of how perceptions of television, video content and entertainment programming are changing every day, Snapchat on Monday appeared for the first time at a Television Critics Association tour.  They were here to educate (a surprising number of) critics as to what Snapchat is and how it is used, provide data on the depth and breadth of its usage and make clear that it, too, deserves the attention of critics and reporters who cover programming.

It was strictly an executive session (though that may change at future TCA tours, given the enthusiastic response Snap received here and its ambitious plans to begin producing scripted programming).  Vice President of Content Nick Bell (pictured at left above and below) and Head of Original Content Sean Mills (right) were on stage throughout.

“We’re excited to be here and, actually, pretty humbled to be here, as well,” Bell said by way of introduction.  “This is probably a little different to some of the stuff you’ve sort of seen previously over the last few days.”  Only a few hands went up when he asked how many journalists in the room had used Snapchat within the last week.

Then the lesson began.  “Snapchat is really broken down into three screens,” Bell began.  “We open at the camera, and that’s really about providing self-expression to our audience.  On the left-hand side of the camera is the Friend screen, where people chat with their friends.  That’s what really drives the frequency and brings people back into the app on an ongoing basis.  On the right-hand side is our Discover page where content lives. 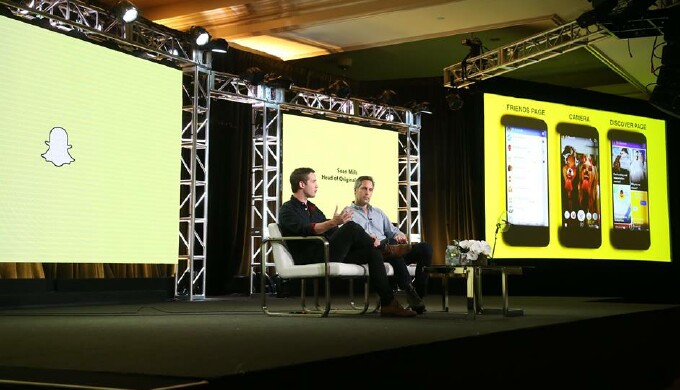 “We have three content formats on Snapchat,” he continued.  “The first is a product called Our Stories [which] I like to describe as one of the biggest outside broadcast trucks in the world.  If you take events like the Super Bowl last year, we had over 600,000 Snaps submitted by our community to that event.  We then have humans curate those stories and edit those stories into packages that we put out to our audience.

“The second product is called Publisher Stories.  That’s basically like a big newsstand.  We have over 90 publications, ranging from Vogue to Vulture to The New York Times that publish these magazines and newspapers on a daily basis.  The third product is a product called Shows (which was explained later in the session).”

“On average, Snapchatters open the product 25-plus times a day,” he continued.  “They spend 30 minutes using the product.  If you take that to our core audience of 13-24 year olds, it’s actually 40 minutes plus a day, a number that continues to grow.  Two thirds of our audience is creating content every single day using the camera.  There are 3.5 billion snaps created by our community every single day.  What this is really giving us is a leg up when it comes to understanding what mobile video is about. No other platform has the amount of creation that we do.  What we’re doing is we’re learning from our audience what makes great mobile video storytelling.”

“We believe that mobile video is a fundamentally new medium,” Mills said.  “What we thought a lot about was that the creative process [for Snapchat] needs to be fundamentally different.  Most people were just doing what usually happens when a new medium arises, which is they were repurposing stuff from the previous medium and using it as a new distribution platform.  We wanted the creative process to change.

“We’re just at the very beginning,” he explained.  “We’re learning alongside of our partners.  We’ve partnered with most of the major television networks.  This year we’re really excited to move further into scripted.  At the end of last year, we announced a joint venture with NBCUniversal to focus on scripted mobile storytelling on Snapchat.”

Mills suggested that scripted serialized storytelling would appear to be a natural for Snapchat.  “We’ve learned a lot from unscripted that we can apply.  But we’re fascinated by the behaviors of people on Snapchat.  The average Snapchatter visits, on average, 25 times a day now.  We think that’s an opportunity for daily or maybe even more frequent storytelling.”

Critics wanted to know what Snapchat does with all of the information it gathers about its users, not unlike Facebook.

“We have the same sort of wealth and data available,” Bell noted.  “When you have such frequent usage 25 plus times a day, and people are spending 40 minutes on the service, you can find a lot of information about how and what and when people are consuming.  That has been an integral part of how we are influencing the creative process with our partners.

“With two-thirds of our audience creating video every single day, they really are creating the language of mobile video,” he continued.  “How they are Snapping back and forth with their friends is storytelling.  What we’re now doing is packaging that up, going to the best storytellers in the world from film, TV and news and taking that data -- that playbook, if you like -- and developing it further with them.  What does that look like when you take that out to the professional world?  You’ve got to have that same sort of pace.  That is what’s keeping people hooked and engaged and keeping the story moving.”