TCA: After 25 Years Sinbad Returns to Fox in "Rel" 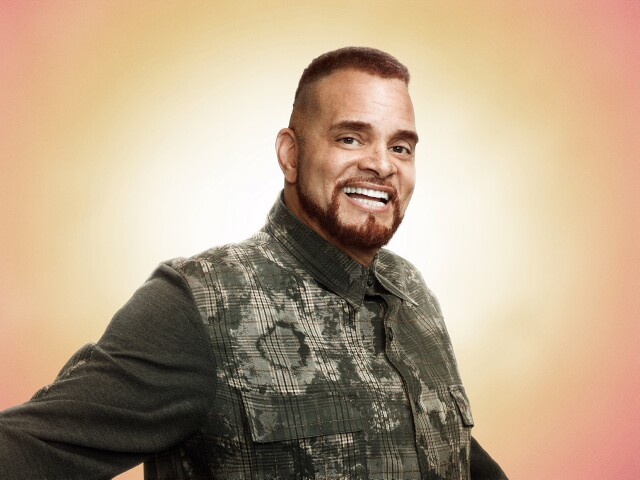 Beverly Hills, CA – Fox’s annual Summer TCA party at Soho House in West Hollywood is always a glittery mob scene, created to be an event with serious security, excellent food and inspired deejays.  Within half an hour, the restaurant offering striking panoramic views of Los Angeles was as jammed as a subway at rush hour.  As always, though, a packed Soho House offered a far better experience, as throngs of publicists, executives, journalists and actors balanced inventive cocktails and busily chatted with one another about the network’s new and returning shows.

In this mass of people, one familiar dome towered over everyone else’s.  At 6' 5" and sporting a red mohawk Sinbad looked slightly different than he does on Rel, a new Fox sitcom set to premiere on Sept. 9.  As the father of Lil Rel Howery, Sinbad has a shaved head and a sharp tongue.  On this night the Michigan native clearly relished being back in the spotlight and couldn’t help but make jokes as he tried to maneuver tight spaces to settle in for a long chat.

It proved to be a happy reunion of sorts.  After all, we had spent New Year’s Eve 2000 together … in a sense.

Full disclosure:  Sinbad opened for Marc Anthony at Madison Square Garden that night and I was in the cheap seats.  But he lit up at the mention of that famous concert and how Anthony ignited his hometown crowd.

The first topic Sinbad wanted to discuss was that it has been 25 years since The Sinbad Show debuted -- also on Fox.  “When I was on TV, they told me not to go in the writers’ room,” he recalled.  “They told me, ‘We know what you want.’”

He made clear that back then the network did not know what he wanted.  The proof that no one was listening to him?  Salma Hayek made only three appearances on his show.  He still marvels at how quickly she caught on “to a different vernacular.” When the show let her go, Sinbad recalled that he told everyone to watch this beautiful, funny actress because she was going places.

Though still smarting over the short-lived show, Sinbad continued to work.  The son of a preacher, he credits his father’s kindness for instilling great lessons in him.  His dad was “never judgmental,” he recalled.  “He welcomed everyone -- doctors, lawyers, hustlers” -- and raised his six children to do the same.

“The difference between me and Robin Williams is that my dad loved me,” Sinbad said, referring to articles he has read about the late comic.  “That makes a difference in your life.  He made my life safe.”

Growing up in Benton Harbor, Michigan as David Adkins, Sinbad was a basketball-crazed kid.  He was good enough to play for the University of Denver, and like so many hoopsters destroyed his knees.  He recently reinjured his replaced knees and still loves basketball even if water walking is more his speed now.

After college, Sinbad enlisted in the Air Force and did comedy gigs while in the military.  He continues to tour about 48 weeks a year, though he was considering taking a hiatus while on Rel.  Stand-up comedians who flourished on television remain his touchstones for success, and it was from some of the top in the field that he learned so much.

Sinbad broke into television in 1986 on The Redd Foxx Show and within a couple of years was on The Bill Cosby Show.  He then became a series regular on its spinoff, A Different World.  Set at a fictional, historically black university the show tackled issues such as racism which weren’t always deeply examined on black comedies 31 years ago.

“It touched on everything,” Sinbad noted.  “I think it’s the duty of comedy; to touch on things that nobody wants to talk about because we can slide around, and people will laugh, or they’ll go home, (saying) ‘Wait a minute.  What did he just say on stage?’  You can sneak a punch in sometimes through comedy -- not make light of it -- but I’m actually going to make you deal with this, and we are going to talk about it, and now a conversation opens up.”

At 61, Sinbad continues to idolize the comedians who influenced him, including Redd Foxx, Bill Cosby and Jonathan Winters.  Today, though, he is the elder the younger actors and comedians look up to him.

Rel is thrilled to have Sinbad playing his father.  “It’s unreal,” he said while threading his way through the party.  He broke into a huge smile when he saw Sinbad, whom he’s admired since he was a kid.

“He's playing my dad, but at the same time, I’m honored to be kind of honoring him for the hard work he’s done for years, to open up the doors for a lot of us to do stuff like this now,” Rel told me.  “That's basically what I’m doing.  I’m just paying homage to him, and I'm happy he’s just able to do the show.  He’s a legend.  I think sometimes people forget to celebrate legends.”