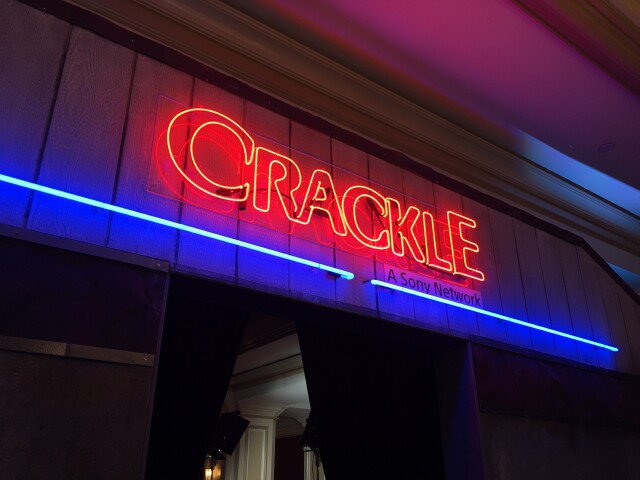 Pasadena, CA – The Winter 2018 Television Critics Association tour is turning into quite the stream show, with first-class presentations from Hulu, YouTube, Sundance Now, BritBox, Acorn TV and Crackle all merging into the cable days of this marathon event.  The only streamers in absentia are CBS All Access (which put on a strong presentation at the Summer 2017 tour and will certainly do so again), Amazon and Netflix.  Other non-broadcast and cable services in the schedule include AT&T Audience and Snap.

Of the streamers, only Crackle is free to consumers, a distinction that General Manager of Crackle and Executive Vice President and Chief Digital Officer of Sony Pictures Television Networks Eric Berger pointed out to reporters and critics at the service’s session on Sunday.

He also announced that Crackle in the spring will be rebranded as Sony Crackle.  “We will be introducing this new look and brand and pressing the reset on our interface to create an even better ‘always on’ experience,” he said.  “This is just the beginning of what will be a global effort on the part of our company to fully integrate the Sony name into our portfolio of content brands.  Our goal is to lean into the power of what Sony stands for.

“It’s a time of real change in our industry,” he continued.  “At Sony and more specifically at Crackle, we are hyper-focused on the intersection of storytelling and technology.  We know that building that special bond with fans is more important than ever before, and it’s also important for viewers to understand why Crackle is different.”

Berger acknowledged that with so many OTT services in play and so many more on the horizon the choices for consumers can be overwhelming.  “What viewers are often left with is sticker shock, which is why I’m glad to say that Crackle remains free,” he noted.  “We are the No. 1, over the top, premium ad supported network, the only free service with scripted originals, and we are available in over 21 countries, including the U.S. and Canada.

“We are the only streaming network backed by a major Hollywood studio, and unlike other streaming players, we are not trying to be all things to all people,” he added.  “We are curated, and although we are a streaming service, our philosophy is to program Crackle much like a linear network.  We look at beliefs and values as a way of predicting intent rather than a specific age or gender.  We know our audience, and that’s been invaluable. But there’s something more that gives us an edge, and that’s being part of the Sony family.  When it comes to brand recognition, there is no question about where Sony rates.  [It] consistently ranks in the top 100 global brands.”

Hence the decision to rebrand the service.  The soon-to-be Sony Crackle made sure to make an impact at TCA, even though it was the 44th panel in the cable and streaming portion of the tour.  Before introducing a panel for the service’s upcoming action-drama series The Oath, which is executive produced by Curtis ‘50 Cent’ Jackson, Berger announced that its upcoming original movie In the Cloud, about the evolution of virtual reality and artificial intelligence and the consequences that arise when they are controlled by terrorists, will have an original VR companion piece.  It will be released on February 1, ahead of the film’s premiere February 8.

In another example of the soon-to-be Sony Crackle positioning itself at “the intersection of storytelling and technology,” Berger also announced that Sony’s VR heist game “Snatch,” a companion to the service’s scripted action series of the same name (reviewed here by our own Ainsley Andrade), will be available on PlayStation on January 16.  Critics had the opportunity to delve into the VR experience at a lunch sponsored by Crackle, which transformed the massive lobby lounge here at the Langham Pasadena Hotel into a set from The Oath(that's the entry pictured at top).  The VR game stars cast members from Snatch (which is currently shooting its second season in Spain); the challenge for players is to crack a giant safe.

Also on the digital front, the third season of Crackle’s thriller StartUp, which is centered on the world of cryptocurrency, has begun filming its third season in Puerto Rico.  The Oath is also shot there.  (Sony made a donation in the name of each critic who attended the Crackle lunch to support relief organizations that continue to work on the island in the wake of Hurricane Maria.)

“We were there before and after Hurricane Maria, and our return this past fall to complete our final episode was incredibly moving for all involved,” Berger said.  “We are excited about the opportunity to support their film community.”

Several actors from the cast of The Oath reflected on the experience of working around the onslaught of Hurricane Maria, as well as evacuations in advance of other storms that ultimately did not damage the island.

“We all felt very connected to our crew,” said Elisabeth Rohm.  “They were primarily Puerto Rican.  We were really thrilled that Sony and Crackle allowed us to go back and finish.  After each evacuation, to go back into that environment and to stay committed to our crew and to continue to bring money and creativity and production there … that’s the only way they can rebuild.  Specifically, after Maria we went back for the last two weeks [of production and] all of us did volunteer work.  It’s still a mess there and still requires a lot of support.”

“It felt really, really good to go back, to bring more jobs, because most of the Puerto Rican families, they didn’t have anything, you know?” added Cory Hardrict.  “They didn’t have shelter.  They didn’t have clean drinking water.  So to go back, I felt like that meant everything to us, just to see human lives, you know?  You know what I’m saying?  It’s like it was our obligation to go back.  Even though we live here in L.A., I feel like the Puerto Rican people are the same.  It’s just one.  And that’s how we treated it.  You know, we were all family, and it all comes from a loving place and that’s what it should be about.”

“Every day you go to work and you hug these people,” said J.J. Soria, who chose to remain on the island during Hurricane Irma but evacuated for Maria.  “It’s like, oh, let’s do it again.  We’re on this ride together.  We’re doing this.  We rode that ride together and it brought us all closer together, for sure.”

“There was an amazing amount of survivor’s guilt getting on the plane and leaving the island and leaving this family that we’d spent so much time and worked so hard with,” said series creator and executive producer Joe Halpin.  “But it was also great to be able to tell them that we were coming back after the hurricane, that we didn’t abandon them, and that we continued to shoot the show."