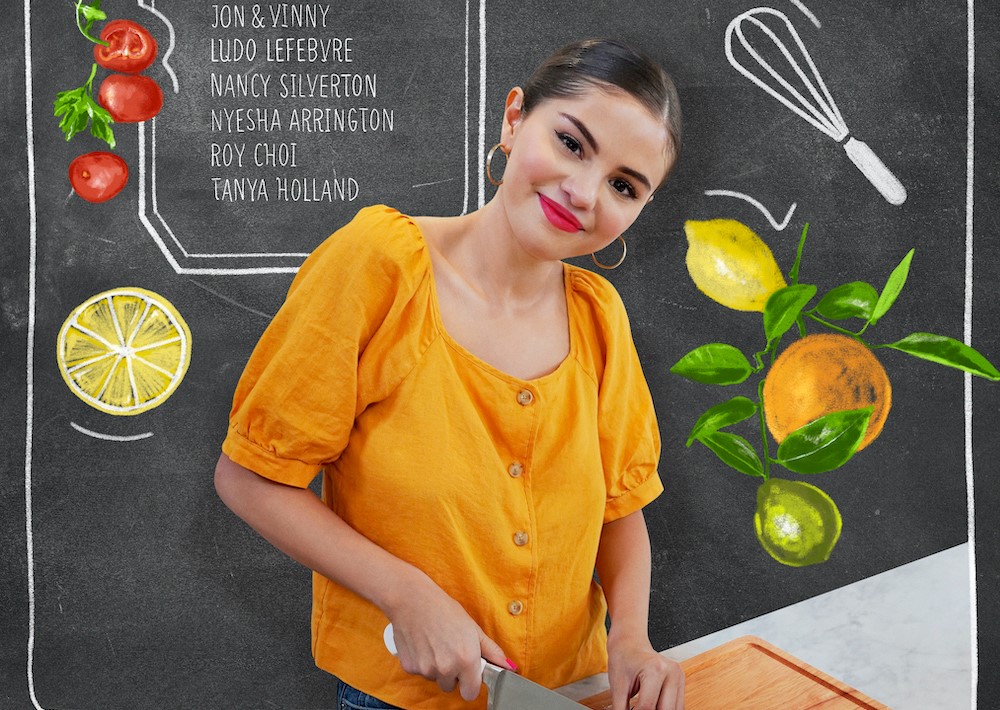 As the current confinements of social distancing and self-isolation continue to prove challenging to content providers creating programing, WarnerMedia is tackling the subject head-on with two new shows, both produced under strict pandemic safety. Announced during their virtual Television Critics Association Press Tour panel on August 5, HBO will debut Coastal Elites (pictured below) featuring Bette Midler, Kaitlyn Dever, Dan Levy, Sarah Paulson, and Issa Rae to name a few, while streaming platform HBO MAX will debut Selena + Chef, starring Selena Gomez (pictured at top) and a host of virtual culinary counterparts whipping up everything from octopus to miso soup in her home kitchen. One show takes a look at the dire straits of a divided country through the social commentary of Zoom conversations. The other focuses on educating our youth.

Billed as a "socially distant satire," Coastal Elites features pre-written monologues delivered by actors concerning all manner of social issues. Everything from the disdain felt by some for our current administration's running of the country to LGBTQ issues and Black Lives Matter will be addressed. Originally conceived for the Public Theater in New York City, following the coronavirus outbreak it morphed from a stage to a screen project with filming taking place earlier this summer under strict quarantine guidelines.

"I started writing this over a year ago after realizing everyone was angry and concerned about the future of the country," said executive producer and writer Paul Rudnick who was happy to re-work it to its current form. "I adapted it and wrote in BLM and the pandemic for these characters as it applies. I like re-writes and I thought all we need now is a hurricane! Then we had one."

The cast addressed working in this new 'isolated format', something many are familiar with, considering the rise of voiceover work and looping dialogue. However, actively seeking Zoom work wasn't exactly a plan. "We weren't looking for Zoom work, but it was really nice and convenient," admitted Dan Levy who plays Mark Hesterman, a young gay actor videoconferencing with his therapist at a moment of peak career and personal stress.

"I had never done monologue work outside of high school theater so that was a hugely exciting challenge," he added. "It wasn't until learning those lines I realized, 'Oh, the process of actually learning a monologue is quite difficult.' But they are so interesting and revelatory. Every character you have an impression about ended up revealing things that were so surprising, funny, and heartbreaking. I think there's such a fine line between his experiences and my own, having walked into many a casting session being told to kind of 'up the gay,' so it was really significant for me to sort of go through that as an actor because it was having to kind of find my own experiences to sort of bring them into it."

"I'd agree," concurred Issa Rae who portrays Callie Josephson, a well-connected philanthropist whose prep school network leads her to the highest levels of government. "Like Dan, there was kind of a fine line between a thicker line in terms of status. But I think, for me, this is kind of an education because I do tend to try to avoid as much of the Trump family as possible and Ivanka in particular, who I've always found fascinating, but not fascinating enough to listen to. It took a lot to research, and the more I found out, the more horrified I was, and a lot of that is expressed through the work."

Bette Midler, long vocal on social media about her disdain for the current administration, found solace in the project. "It was cathartic, but not cathartic enough as I am still in a rage and angry," she admitted. "A lot of people said showbiz was depression-proof and now we discover [it] isn't. It's like in the depression, [with] movies, they were the only thing that survived, and people still worked at and made a living. Now we're all out of work. I mean it's nice when the work comes, and we're happy to do it, but the conditions are utterly bizarre. It really is like we're on some sort of a spaceship and we don't know where the spaceship is going." 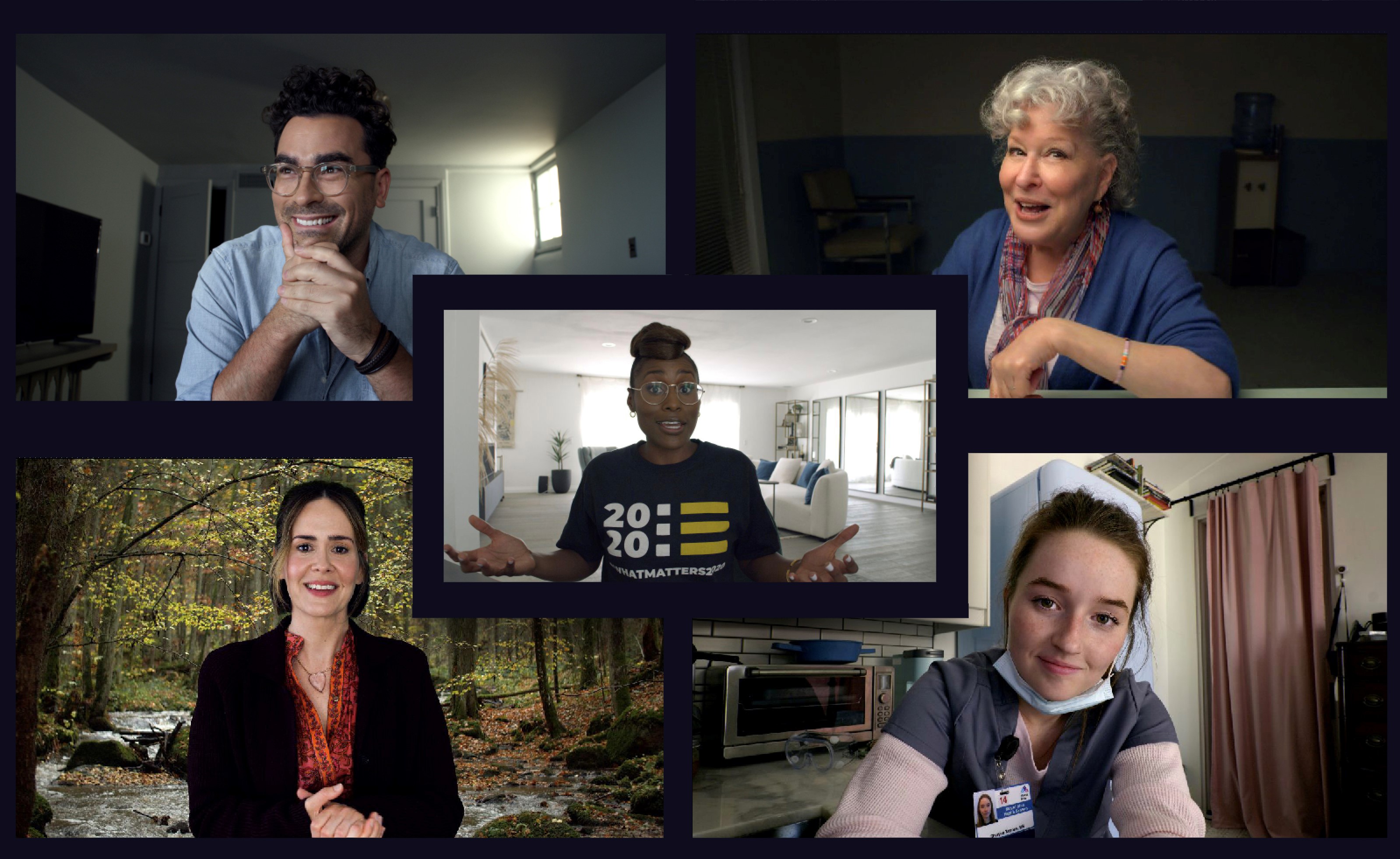 On a lighter note, multi-faceted entertainer Selena Gomez hopes that by inviting young viewers into her home kitchen via her HBO MAX series Selena + Chef she'll create an army of up and coming culinary wizards. Over the 10-episode series, Gomez will be "virtually" joined by a leading chef, in the hope that she can master some cooking skills and provide a little laughter. "I thought this would be lighthearted," she said of the decision to open her home. "I was getting down, and I realize a lot is going on, but it was an opportunity to make people smile, as I look like a fool. I love cooking, I just don't know how to do it all the time."

As with anything she does, there's a message of inspiration. "Anything to get kids' minds going," she shared. "I've always been that way, so I'm hoping this can bring them joy. If it's something they discover they love, that's even better! I feel like in schools and certain academic worlds they don't give you the option of trying something that maybe would interest you. Like there are these four blocks everybody sticks to, so something fresh and new for young kids is exciting and I would want nothing more than to see all these cute little chefs become grown-ups."