TCA Day One: All About "New Fox" 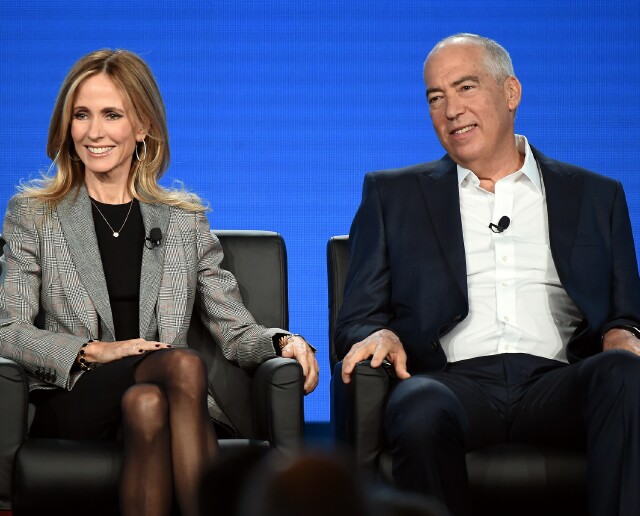 Pasadena, CA -- It was something even those of us who have been covering the twice-yearly Television Critics Association tours since the last century never thought we would see:  Fox opened their day by projecting a huge (photo-shopped) image on screen of Fox Television Group Co-Chairmen and Co-CEOs Gary Newman and Dana Walden posing happily with Mickey Mouse.

“It’s good to see all of you,” Newman said, greeting the group as the image appeared on screen.  “I hope you had a great holiday and enjoyed your vacations.  As you can see, Dana and I certainly did.”

The Grand Ballroom at the Langham Huntington Hotel in Pasadena – our home for the next two weeks – exploded with laughter.  “[We wanted to acknowledge] the elephant in the room or, in our case, the mouse,” Newman added, to further laughter and applause.

And just like that, the air was cleared for a session largely devoted to the recently announced sale of many assets of Fox to The Walt Disney Company.

Newman (pictured at top with Walden) wasted no time explaining exactly what the sale – which he said will not be finalized for another 12-18 months – will mean for the Fox Television Group.  “On the day the deal closes, the TV studio will become part of Disney,” he said.  “On that same day, Fox Broadcasting Company, Fox Sports, Fox News and the Fox owned-and-operated stations will be spun off into what we are calling ‘New Fox.’  This will be a very robust and nimble company, which will continue the tradition of disruption that has always been core to the Fox brand.  We are in the most exciting and dynamic time in the history of the TV business, and ‘New Fox’ has an extraordinary opportunity to chart a new course for the future.”

Along those lines, Newman reminded the press that Current Fox has jumped out way ahead of the other broadcast networks during this first week of the new year by premiering three new shows -- the comedy LA to Vegas, the drama 9-1-1 and the reality competition series The Four: Battle for Stardom -- along with the 11th season of The X-Files.

Dana Walden acknowledged that there has been "a little bit of confusion” over plans for “New Fox.”  “When [News Corp. Executive Chairman] Rupert Murdoch initially was talking about ‘New Fox,’ he was talking about it as a whole entity -- Fox Sports, the O&Os, Fox News and the broadcast network," she said.  "The three companies that I mentioned first are largely live platforms.  So, 80 percent of the programming in all of 'New Fox' will be live and sports, and then the network will continue to do entertainment programming.

“Rupert sees this as an enormous opportunity for the broadcast network,” she continued, noting that independent program suppliers like Warner Bros., Sony, Lionsgate and MGM have been outsiders at Fox.  “They never have a leg up in terms of getting onto a broadcast network, and in [Rupert’s] view, this is a great opportunity for a lot of companies that have tremendous rosters to be advantaged at a network.

“If you look at those four companies that I mentioned earlier, that will become part of ‘New Fox,’ it’s an extremely lucrative, domestically focused business,” Walden added.  “The real estate on the broadcast network is very valuable.  I’m sure that anyone who wants to be in business with ‘New Fox’ will also have to contemplate some sort of ownership split with the network in order to gain entree onto their schedule.  If you look at the company as a whole it will be very lucrative.” 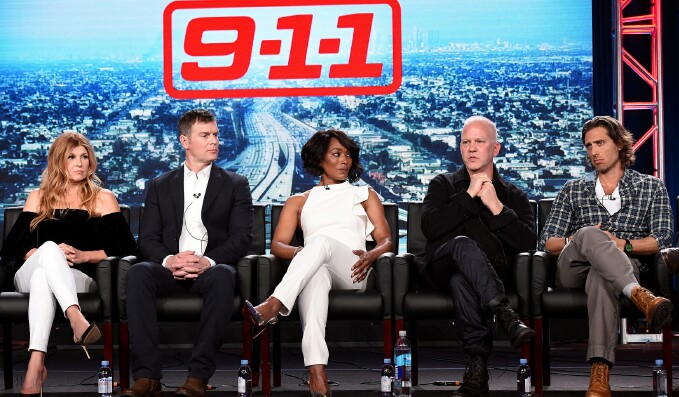 Later in the day, when Ryan Murphy was here to talk about his new drama series 9-1-1, he was asked about the sale to Disney of the studio he has long called his home.  (Murphy is pictured above, second from right, with 9-1-1 stars Connie Britton, Peter Krause and Angela Bassett and executive producer Brad Falchuk.)

“It’s a very emotional thing for me, and I’ll tell you why,” he said.  “I started with Fox in 2003.  I was somebody who was told I was not employable.  I did Nip/Tuck [at Fox studios].  It was my first show that worked, and I was given an opportunity.  From that, I was allowed to create a career, and I created with Brad [Falchuk] and Tim [Minear] and with other collaborators things that I really loved, like Glee and American Horror Story and American Crime Story and Feud and now 9-1-1, and I was allowed to do The Normal Heart.  I have been surrounded since 2003 at Fox with an incredible group of executives who have always allowed me to sort of follow my interest and passions.  I’ve grown up there.  I started working there in my thirties.  I was very not prepared for what happened.

“When this deal first went down, I got a call from the Murdochs and I got a call from Mr. Iger, and I said point blank, the stuff that I do is not specifically Disney, and I’m interested in that and I’m concerned about that,” he continued.  “Am I going to have to put Mickey Mouse in American Horror Story?”

When the laughter at that Mickey Mouse reference died down, Murphy said of [The Walt Disney Company Chairman and CEO] Iger, “He was very sweet and transparent and kind.  He said the reason that Disney was interested in buying Fox is because they believed in the assets and they believed in the executives and the creators.  I think that Mr. Iger has done a tremendous job taking over communities and keeping those communities intact and families intact, like Pixar, like Marvel.  So I’m sort of interested to see what that company is going to look like before I make any decisions about where I’m going to go.  But it is an interesting thing to feel that suddenly your family could change or be separated, and I think that I’ve just decided to wait and sit back and talk to my friends, who are my bosses, and see what’s happening with them and then make a decision once we sort of know what’s happening.

“It’s not just me at this point,” he added.  “I’ve created a group that is really trying to move the bar forward in terms of hiring women, hiring minorities, getting equal pay for women, and I want to continue that wherever I go.  I want to make sure that that community is taken care of.”

Seth MacFarlane, another of Fox’s mega-producers, came by later with the cast of his long-running animated series Family Guy for a table read of the upcoming 300th episode.  He also had something to say about the Disney deal.

“I was remarkably unfazed,” he said.  “This kind of stuff happens often now.  By buying 20th Century Fox, [Disney] bought all of its franchises, as well.  I think that’s where the value is, so I don’t really expect anything to change all that much.  If I had to guess, I would say they would maybe treat it like a Touchstone in the ’80s and let 20th be its thing and be its [own] brand.  I don’t think a whole lot is going to change.”

MacFarlane noted that, as with Murphy, Iger reached out to him, too.  He called it “a very good phone call.”