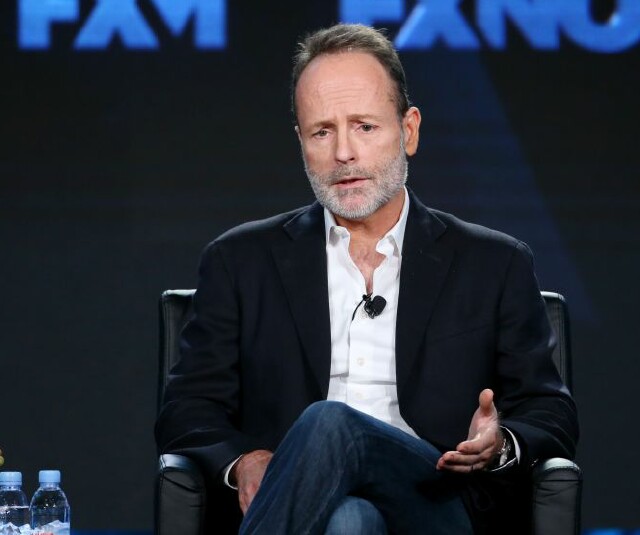 Pasadena, CA -- Everyone in television who is involved with content creation covets the support of critics and the honors they bestow, from their annual Best of the Year lists to recognition at the Critics’ Choice Awards and the Television Critics Association Awards.  But only one network routinely processes what critics say in aggregate about its shows and reports it back to them once a year at the annual Winter TCA tour.  That network is FX, which on Friday kicked off its day at TCA with a Q&A with John Landgraf, the CEO of FX Networks and FX Productions and arguably the most popular network chief to engage with the press at TCA tours since CBS’ Les Moonves.

Landgraf (pictured at top) always tells it like it is, even when evaluating the competition.  “Eleven of the 14 shows that FX programmed last year, about 80%, made your year-end best lists,” he said.  “As to what television was best overall last year and which brand supported it, you, whose collective opinion we value so much, clearly thought that enough of the enormous dump of new programming Netflix gave us was good enough to significantly elevate their overall critical reputation.

“For the past four years we’ve presented a slide each January ranking the most critically acclaimed brands based on program inclusions on critics’ year-end ‘best’ lists,” he continued.  “FX has fared very well, running neck and neck with HBO since 2013 and actually nudging them at the wire last year.  That was a colossal feat we could have never imagined and something we’re very proud of.  This year, however, Netflix vaulted into the No. 1 position with 24% of mentions, while HBO was second with 21%, and FX was well back in third with 10%.

“FX programmed a lot of great television last year, but it was challenging not having American Crime Story and Atlanta, which were the most critically acclaimed miniseries and comedy of 2016,” he continued.  “On the other side of the ledger was the surge of Better Things, which several of you put at No. 1 on your list and 45 of you included overall.  With the final season of The Americans as well as the return of Atlanta and American Crime Story, not to mention new seasons of Feud, Better Things, Legion, Baskets, Archer and Snowfall, plus the addition of [new dramas] Trust [starring Donald Sutherland and Hilary Swank], Mayans MC [Kurt Sutter’s follow-up to Sons of Anarchy] and Pose [Ryan Murphy’s drama with music about New York City in the ‘80s, featuring the largest transgender cast ever assembled for an American television series], we feel optimistic that the coming year will be a great one for FX.

“All in all, though, it remains challenging to keep up with the sheer volume of a competitor like Netflix, as well as the legacy of excellence and much larger programming budget of a competitor like HBO, as well as staying ahead of the pack of 74 other television brands, channels, or platforms that made and marketed an original program in 2017, which at least one of you singled out on your year-end “best” list,” he added.

That comment lead to talk about the “mouse in the room” during the Fox and FX days at TCA: Disney/ABC.  “The likelihood that FX will ultimately become a part of a much larger Disney, with the distribution and content resources to compete on a global field with the likes of Netflix, Amazon and HBO, will undoubtedly help our brand to remain competitive and relevant into the future and through the peak TV era,” Landgraf said.  “The only thing that ever has truly interested us at FX in our business is the enormous, fascinating challenge of helping storytellers make and market truly great television.  As the largely unregulated internet platforms look to become world-swallowing trillion-dollar companies, Hollywood, with its quaintly old-fashioned focus on storytelling, has no choice but to seek the scale necessary to compete.

“I think Disney, under Bob Iger’s leadership, has been a very good steward of brands that it’s bought,” he continued.  “Places like Pixar and Marvel have distinctive, creative cultures, and those creative cultures seem to have thrived under Disney’s leadership.  I had a lovely conversation with Mr. Iger and he was extremely kind.  He seems to have really wanted FX to be a part of the larger plans and feels like we have something that’s unique.  In some ways, the [fact] that FX and Disney’s brands are so different from each other is a good thing, because it means that what we do and the expertise we have doesn’t exist currently inside that company, meaning we bring something distinctive and unique into their world.  Neither I nor anyone at FX has any counterpart at Disney. What FX is and what FX does simply doesn’t exist in their organization, so on some levels that a relatively clean thing.  Where they intend to put us, exactly how they intend to integrate us into a larger structure, where I sit relative to that, where the FX brand and content sits relative to their larger streaming plans, I genuinely don’t know at this point.

“One of the things that Iger has said is that one of the reasons they’re getting bigger is they want to be able to compete against global streaming services like Netflix and Amazon.  When you think about the amount of money that subscription services like HBO and Netflix and Amazon have made in adult scripted programming, the very content in which we have expertise, you can see with clarity that at least they believe that’s a really good thing to invest in, that that’s an important component of what drives consumers’ interest in a streaming service.  So we end up becoming the sort of adult scripted component of their larger plans.”

After acknowledging its success, Landgraf then drilled down into Netflix.  “There’s no question that the streaming services are putting a huge amount of pressure on the business model, because Netflix is a money losing enterprise,” he declared.  “I mean, it reports a profit, but it’s free cash flow … the amount of money it takes in in a given year versus the amount of money it spends in a given year is negative more than $2 billion.  It’s losing money but gaining market share and gaining market value.  That puts an enormous, fresh amount of pressure on the business enterprise.  So I understand in that context why Hollywood companies feel the need to bulk up.  All I can say is I’m optimistic [about Disney] and time will tell.”