TCA: Gillian Anderson Bids a Fond Farewell to "The X-Files" 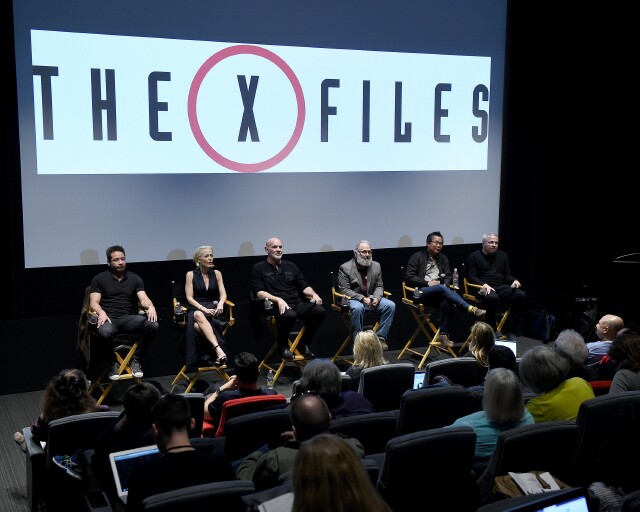 After more than twenty years being associated on television and at the movies with her fictional FBI persona Dana Scully, actress Gillian Anderson is leaving the role for good.  Last week during the Television Critics Association tour in Los Angeles, at a press conference (pictured above) devoted to the current eleventh season of the show, Anderson gave her definitive word on the subject.  "This is it for me,” she said.  “I'm really serious.  I've done this now for decades, and it's time for me to hang up Scully's hat.  It just is.  I have so much respect for these guys, and I have respect for Scully, and it's really sad.  But I'm finished, and that's the end of that."

According to Anderson, the decision was one she made some time ago -- long before the current 10-episode season began on Fox.  "I arrived at the decision before we did the previous [season]," she admitted.  "I thought that [those] six [episodes were] going to be it.  It was dipping our toe back in again and just meeting up again and making the most of it and getting to play these wonderful characters again.

"I think, as [series creator] Chris [Carter] has said himself, that that short stack of episodes kind of felt like we were learning how to walk again," she continued.  "This season of ten [episodes] feels like the pace is up and we are running."

Anderson agreed to return to the series for the current season because she thought last year’s six installments didn't feel like the right way to end her long run.  "It didn't feel like I would necessarily have been happy if those six were how we said good-bye," she revealed.  "The way that the writers were talking about doing another season -- were we to do another season -- sounded more like a good ending to me.

"When I was asked to do another season, I agreed," she added.  "It never occurred to me, nor was it discussed or suggested, that it was now a new [ongoing] series, that we were starting a new series.  So I said, ‘Yes, I will do this.’  But in my mind, it had always been that it would just be one season."

The cultural impact of The X-Files has not been lost on Anderson.  "It's been an extraordinary opportunity and an extraordinary character and I am hugely grateful,” she reflected.  “But there's lots of other stuff I want to do, and I don't really want to be tied down to months and months of doing any particular one thing that I feel like I've done."

With Anderson out of The X-Files, series creator Chris Carter has made it known he has no interest in continuing without her and furthering stories with just Fox Mulder, played by David Duchovny, who originally left the series in its eighth season.   "I've tried to say goodbye to Fox Mulder many times, and I failed," Duchovny joked when asked about the possibility of continuing solo.  "They [just] did the show without me.  So how do you like that?

In the meantime, both actors have full plates.  Actor, singer, author and director Duchovny has an album coming out in a few weeks followed by a novel in May and a tour of Australia.  He's also hoping to direct a movie version of his second novel Bucky F*cking Dent in the summer.

The final season of The X-Files is currently telecast Wednesdays at 8 p.m. on Fox.